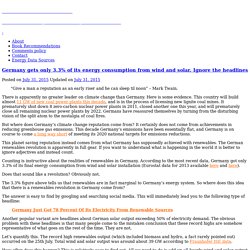 Ignore the headlines Posted on Updated on “Give a man a reputation as an early riser and he can sleep til noon” – Mark Twain. There is apparently no greater leader on climate change than Germany. Big Hydro. Renewables. Leslie Dewan. About 19% of the electricity in the U.S. today is nuclear-generated—enormous plants that generate power by way of uranium fuel rods, which heat up water to create steam and drive turbines. 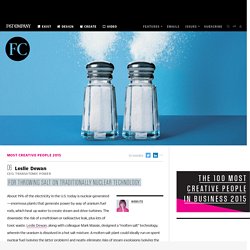 The downside: the risk of a meltdown or radioactive leak, plus lots of toxic waste. Leslie Dewan, along with colleague Mark Massie, designed a "molten salt" technology, wherein the uranium is dissolved in a hot salt mixture. A molten salt plant could ideally run on spent nuclear fuel (solving the latter problem) and neatly eliminate risks of steam explosions (solving the former). Dewan, who holds a PhD in nuclear engineering, has spent the past year raising $6 million in financing to get the company through its experimental stage, which was tricky, she says, given that "our returns were 10-plus years out. " Peter Thiel’s Founders Fund made a large investment. Bonus Round. The Death of the Green Energy Movement.

Elon Musk wants to revolutionize our energy system — with batteries. Most people think of Tesla as a company that builds flashy — and expensive — luxury electric cars. 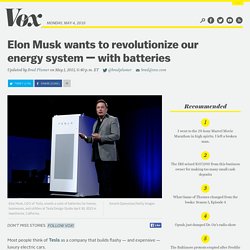 But now Elon Musk, the CEO of Tesla, has even bigger plans than vehicles. He wants to make batteries a core part of Tesla's business, with the not-so-modest goal of transforming the world's electricity system. There's a certain logic to this idea: Tesla is already making batteries for its electric cars. But batteries could potentially have broader applications, too. Germany’s energy policy is expensive, harmful and short-sighted. How the Electricity World has Changed. In the very near future (maybe even as early as even next week), the U.S. 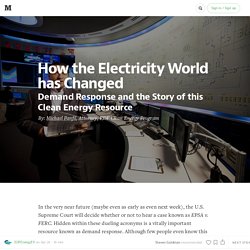 Supreme Court will decide whether or not to hear a case known as EPSA v. FERC. German Companies Take Back the Power. A Thorium 'Battery' Startup. What is the definition of a nuclear battery? 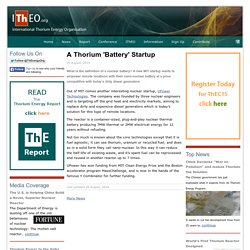 A new MIT startup wants to empower remote locations with their nano-nuclear battery at a price competitive with today’s dirty diesel generators. Out of MIT comes another interesting nuclear startup, UPower Technologies. The company was founded by three nuclear engineers and is targeting off the grid heat and electricity markets, aiming to replace dirty and expensive diesel generators which is today’s solution for this type of remote locations. Power Generation & Storage. Renewables and Feasibility. When discussing the growth of renewable energy there are two rather common mistakes. 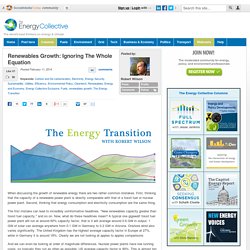 First, thinking that the capacity of a renewable power plant is directly comparable with that of a fossil fuel or nuclear power plant. Second, thinking that energy consumption and electricity consumption are the same thing. The first mistake can lead to incredibly uninformative headlines. "New renewables capacity greater than fossil fuel capacity," and so on. Nuclear power: Environmentalists need to view nuclear power realistically - latimes. What a strange turn of events. 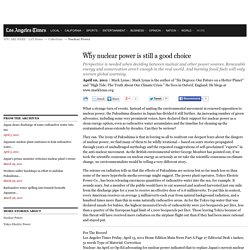 Instead of uniting the environmental movement in renewed opposition to nuclear power, the Fukushima disaster in Japan has divided it still further. An increasing number of green advocates, including some very prominent voices, have declared their support for nuclear power as a clean energy option, even as radioactive water accumulates and the timeline for cleaning up the contaminated areas extends by decades. Is Renewable Energy looking like a ‘new religion’? Guest Post by Martin Nicholson. 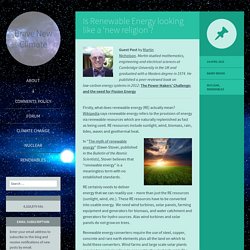 Martin studied mathematics, engineering and electrical sciences at Cambridge University in the UK and graduated with a Masters degree in 1974. He published a peer-reviewed book on low-carbon energy systems in 2012: The Power Makers’ Challenge: and the need for Fission Energy Firstly, what does renewable energy (RE) actually mean? Wikipedia says renewable energy refers to the provision of energy via renewable resources which are naturally replenished as fast as being used. RE resources include sunlight, wind, biomass, rain, tides, waves and geothermal heat. E06 Is Nuclear Power Safe. What’s the most energy-efficient kind of light? Q. 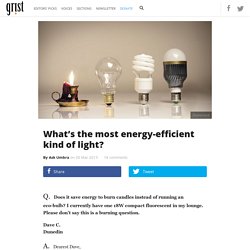 Does it save energy to burn candles instead of running an eco-bulb? I currently have one 18W compact fluorescent in my lounge. Nuclear Power in the United Kingdom. (Updated 22 October 2015) 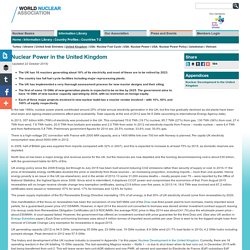 The Left vs. the Climate. Ever since Marx’s day, leftists have been straining to spy the terminal crisis of capitalism on the horizon. It’s been a frustrating vigil. Whatever the upheaval confronting it — world war, depression, communist revolution, the Carter administration — a seemingly cornered capitalism always wriggled free and came back more (and occasionally less) heedless, rapacious, crass, and domineering than before.

Typical costs for electric power bought by US utilities average around 5-6 cents per kilowatt hour generated by coal, hydro, and natural gas sources. Government regulations are requiring utilities to buy solar- and wind-generated power at 20-30 cents/kWh. LFTR’s potential cost advantage of 3 cents/kWh is the economic incentive to stop burning CO2-emitting coal, without economically injurious carbon taxes and politically obscured feed-in tariffs. In this way LFTR can improve both the environment and the economy.

Per person, that is an average of 314 million BTU’s, almost 50% increase in per capita consumption. Over that 64 year time span, that works out to an annual increase of 0.6%. Considering all of the technology driven lifestyle changes that have taken place in those 7 decades, the increase actually seems pretty reasonable. What might surprise you is that throughout that entire time frame, renewable energy has played a role in powering our country.