My Name is Erin Murphy. I am 27 years of age. I moved to the US nearly 5 years ago now. I Left Zimbabwe 7 Dec. 2013, leaving at the age of 23. In Zimababwe, I Left school after 'O' Levels(that is age 16 going on 17),and worked at Veldermeers Belgum Chocolate shop at Dunestate, for about a year,in Msasa-Harare.With my earnings, I left and went to Australia for 6 months and took a course in Photography and Photoshop which lasted 3weeks-held in B.I.A>Brisbane Institute of Art>Brisbane. After this,I came back to Zimbabwe and worked at Southern Lights Trust, home school as an assistant teacher /teacher's aid. 2020 I am now 29 years old. I have actually been living in California for almost 6 years now. I've been working at non-profit youth job training program known as Conservations Corps North Bay (CCNB ) for 4 years and 3 months. In 2019, through CCNB, i interned for the entire year with the Sonoma County Water as a field Technitian assistant where i learnt how to track birds nest locate,trap and tag (with legal permits via fisheries) salmon and return them back to their creeks and track their reds( fish nests) in fresh water creeks throughout the Russian River. I also learned how to study algae and to collect data from the algae also found in parts of the Russian River. my internship ended in early December of 2019. This year (2020) I returned to Conservation Corps just for 3 months with the plan to return to the Water Agency as a seasonal Extra help for 3 seasons. hobbies Bird watching Photography listens to music - dubstep, EDM and sometimes rap and jaz and rarely-some classical. TV series David Attemborough Grey's Anatomy Will and Grace This Is Us My Family Family guy Shameless Monte Gon -reccomended if you like/love plants. -Volunteering- Sonoma County Wildlife Rescue 2015 till present (2020) only 1 day a week.

Find All Free Movies and TV Series There- Ideaflicks. 2020 mixed news. Links to view if interested. Trump news — live: President says he has been taking hydroxychloroquine for weeks after insisting coronavirus vaccine announcement coming soon. Donald Trump claims he takes a daily pill of the controversial drug hydroxychloroquine "as a preventative" against coronavirus, despite no evidence that links the anti-malaria drug as a preventative medicine to combat Covid-19 infection. 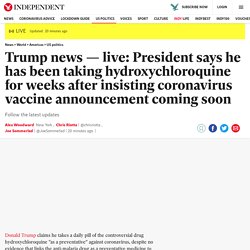 "What do you have to lose? " he told reporters on Monday. The president also attacked his predecessor Barack Obama for his criticism of the Trump administration’s response to the coronavirus, saying the 44th president was “grossly incompetent” in office, despite Mr Trump overseeing the deaths of nearly 90,0000 Americans during the outbreak. While the former president has kept a dignified silence for much of his successor's tenure, Mr Obama's recent return to the limelight to endorse Joe Biden as the 2020 Democratic presidential nominee has seen the president whip up a spurious conspiracy theory involving Obama officials, the FBI and attempts to entrap Mr Trump's incoming administration in 2017. 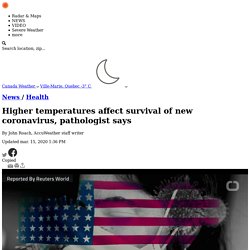 Research from a laboratory-grown copy of the coronavirus (SARS-CoV-2) that causes the COVID-19 illness shows that heat affects the virus and impacts its behavior, a top pathologist said new research has shown. But other infectious disease experts aren't yet convinced. “In cold environments, there is longer virus survival than warm ones,” Hong Kong University pathology professor John Nicholls told AccuWeather exclusively. Nicholls and colleagues from a team at Sun Yat-sen University in Guangzhou, China, previously produced a study, which was published in February and has yet to be peer-reviewed, noting the effect of heat. “Temperature could significantly change COVID-19 transmission,” the authors note in the study. Dr. Getting Up Close with Cranes. Central Nebraska may look like nothing but flat cornfields from a car speeding down Interstate 80, but it’s an incredibly important stopover point for millions of migrating birds, whose wings and cries fill the skies each spring.

One of the most studied and iconic of these species is the sandhill crane, which has been making this annual migration for centuries. Roughly 500,000 cranes travel through Nebraska in the spring, where they descend upon the shallow Platte River, its sandbars, and nearby wetlands to rest and feed before continuing north to breed. Much of the ground was still frozen on a March afternoon on Mormon Island in central Nebraska. This “island” runs for several miles between two channels of the Platte River. Getting Up Close with Cranes. Anaerobic Animals Discovered on Sea Floor – The Scientific Activist. This is pretty neat: scientists have apparently discovered the first example of truly anaerobic animal life (i.e. an animal that can survive in the absence of oxygen). 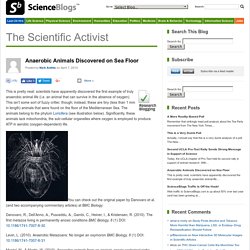 This isn’t some sort of fuzzy critter, though; instead, these are tiny (less than 1 mm in length) animals that were found on the floor of the Mediterranean Sea. The animals belong to the phylum Loricifera (see illustration below). Significantly, these animals lack mitochondria, the sub-cellular organelles where oxygen is employed to produce ATP in aerobic (oxygen-dependent) life. You can check out the original paper by Danovaro et al. (and two accompanying commentary articles) at BMC Biology: Danovaro, R., Dell’Anno, A., Pusceddu, A., Gambi, C., Heiner, I., & Kristensen, R. (2010). 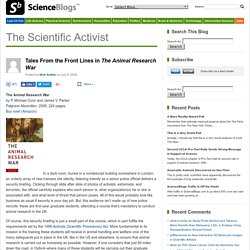 Trump news live: Latest coronavirus updates as president smears vaccine whistleblower in Twitter rant. Virus spikes could emerge weeks after US economic reopenings US states are beginning to restart their economies after months of paralysing coronavirus lockdowns, but it could take weeks until it becomes clear whether those reopenings will cause a spike in Covid-19 cases, experts said Wednesday. 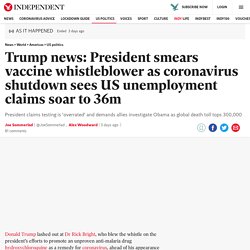 The outbreak's trajectory varies wildly across the country, with steep increases in cases in some places, decreases in others and infection rates that can shift dramatically from neighborhood to neighbourhood. "Part of the challenge is although we are focused on the top-line national numbers in terms of our attention, what we are seeing is 50 different curves and 50 different stories playing out," said Thomas Tsai, assistant professor at the Harvard Global Health Institute. Zimbabwe crisis 2016-By Zimbabwean citezen -Rodger Hawkins. Fear. 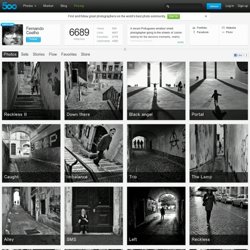 Being a chemical engineer and consultant on the field of water treatment, I have photography as a hobby for a long time and I normally was focused on shooting macro and landscapes with my EOS 7D, heavy lens (Sigma EX 17-50mmm) and heavy tripod. Photography. Animals, Birds & Fishes. Future Studies. Earth - Dream Koala. Planet Earth seen from Space (ISS), mainly at night, with aurora borealis *Full HD* CG Earth. Planet Earth in 4K.