Collections - Musée de la civilisation. WarMuseum.ca - Canadian Newspapers and the Second World War: The History of World War 2. Documents and Reports. The journey and arrival of the Komagata Maru garnered attention at the local and international level. 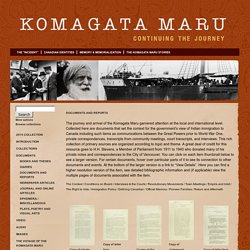 Collected here are documents that set the context for the government’s view of Indian immigration to Canada including such items as communications between the Great Powers prior to World War One, private correspondences, transcripts from community meetings, court transcripts, and interviews. This rich collection of primary sources are organized according to topic and theme. A great deal of credit for this resource goes to H.H. Stevens, a Member of Parliament from 1911 to 1940 who donated many of his private notes and correspondences to the City of Vancouver.

You can click on each item thumbnail below to see a larger version. Primary Sources and Teaching Links. Canadian History Primary Sources, Databases & Resources. Explore the history of Canada, a large country in the northernmost part of North America, which is home to large populations of First Nations people as well as people of British and French heritage. 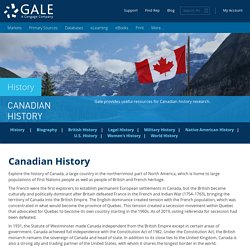 The French were the first explorers to establish permanent European settlements in Canada, but the British became culturally and politically dominant after Britain defeated France in the French and Indian War (1754–1763), bringing the territory of Canada into the British Empire. The English dominance created tension with the French population, which was concentrated in what would become the province of Quebec. This tension created a secession movement within Quebec that advocated for Quebec to become its own country starting in the 1960s.

As of 2019, voting referenda for secession had been defeated. Canadian Letters. Canadian Museum of History. Nova Scotia Archives - Acadian Heartland. Ship Arrival Database. Making Contact. “This house is not meant to welcome our people only. 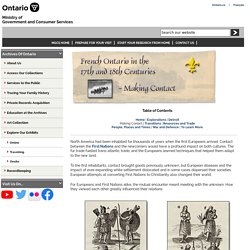 It is a permanent meeting place for the neighbouring nations, particularly Christians, who come from everywhere with various needs, even to die in peace and in the true spirit of the Faith we had to build a hospital for the sick, a cemetery for the dead, a Church for the devotions of the public, a retreat for pilgrims, as well as a more isolated building where the infidels who pass through are allowed only during the day but may nevertheless receive a few good words for their salvation.” 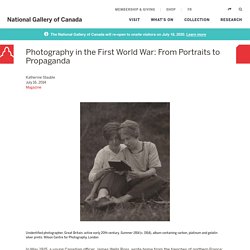 Wilson Centre for Photography, London In May 1915, a young Canadian officer, James Wells Ross, wrote home from the trenches of northern France: “Am still O.K. and dodging shells. … Some unspeakable English Tommy ransacked my dugout while I was at breakfast and stripped everything off my belt, pistol, pouch, compass, etc. and cleaned out my haversack. Thank heaven, they left my photographs as I would be lost without them.” Such was the importance of the photograph to soldiers fighting in the First World War, as well as to their families. As talisman, souvenir, or salve for emotional wounds, the photograph was an object to be cherished and protected, buttoned up in a pocket, slipped into a letter, or carefully arranged in an album.

The exhibition is divided into sections, based on different photographic forms and purposes. Sophia Burthen Pooley, Part of the Family. Sophia Pooley was born a slave in Fishkill, New York, the daughter of slaves Oliver and Dinah Burthen. 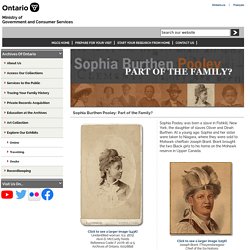 At a young age, Sophia and her sister were taken to Niagara, where they were sold to Mohawk chieftain Joseph Brant. Brant brought the two Black girls to his home on the Mohawk reserve in Upper Canada. Mohawk leader Joseph Brant probably owned over thirty slaves. He bought Sophia when she was seven years old and sold her when she was twelve. Sophia's memories included hunting with Brant’s children … While I lived with old Brant we caught the deer … Peggy and Mary, and Katy, Brant’s daughters and I. She attributed the scar over her eye and other injuries to Brant’s third wife, a “barbarous creature” who beat her and cut her with a knife. Archives of Ontario - Story of an Ontario Veteran - Excerpts from the John Mould Diaries. "It was on the 21st of October (1914) that I really made up my mind to do my share towards helping to defeat the German Army. 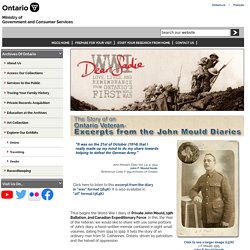