Does Facebook influence body image? - On Health. The social network itself - how can this influence our perceptions? 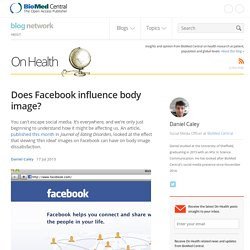 Flickr/Neeraj Kumar The ‘thin ideal’ For a long time, magazines and television have been attacked for the devastating effects that they are thought to have on an individual’s body image. Seeing a slim, sultry supermodel gliding around or a bronzed, Herculean male in a tight fitting t-shirt can cause us to take a poor view of our own looks. In fact, it has been shown that these images of what is known as the ‘thin ideal’ can lead to comparing our own appearances to them and subsequent body image dissatisfaction. Social (media) life However TV and magazines aren’t the only source of ‘thin ideal’ images nowadays.

Unlike conventional media, networks like Facebook are interactive. Body Image And Social Media: Scientists Analyze Harmful 'Thinspiration' Photos Of Women. Exploring her favorite topics on social media, a young girl may stumble upon all sorts of unexpected images. 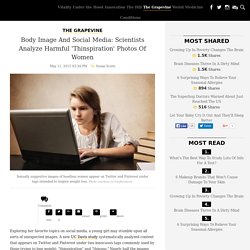 A new UC Davis study systematically analyzed content that appears on Twitter and Pinterest under two innocuous tags commonly used by those trying to lose weight: "thinspiration" and "thinspo. " Nearly half the images featured headless bodies of women and predominantly focused on the pelvis, abdomen, or thighs, while also tending to be sexually suggestive. Yet not all social media is alike, with the two tools differing in key ways. Pinterest tended to show images that had “a little more muscularity while focusing on some kind of fitness, they were less sexualized, and they showed more heads,” Jannath Ghaznavi, a doctoral candidate in the Department of Communication, told Medical Daily.

Yet, on Twitter, she and her co-researcher, Dr. Why should this be concerning? Source: Ghaznavi J, Taylor LD. Female Body Image and Media. Female Body Image and the Mass Media: Perspectives on How Women Internalize the Ideal Beauty Standard Sociocultural standards of feminine beauty are presented in almost all forms of popular media, barraging women with images that portray what is considered to be the "ideal body. 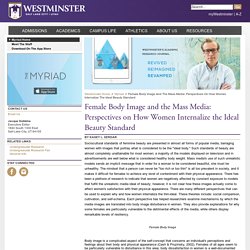 " Such standards of beauty are almost completely unattainable for most women; a majority of the models displayed on television and in advertisements are well below what is considered healthy body weight. Mass media's use of such unrealistic models sends an implicit message that in order for a woman to be considered beautiful, she must be unhealthy. 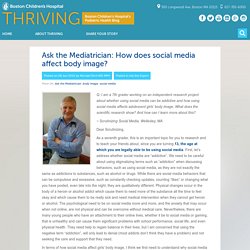 What does the scientific research show? And how can I learn more about this? ~ Scrutinizing Social Media, Wellesley, MA. National Eating Disorders Association. We live in a media-saturated world and do not control the message. Mass media provides a significantly influential context for people to learn about body ideals and the value placed on being attractive. Over 80% of Americans watch television daily. On average, these people watch over three hours per day.American children engage in increasing amounts of media use, a trend fueled largely by the growing availability of internet access through phones and laptops. On a typical day, 8 – 18-year-olds are engaged with some form of media about 7.5 hours. 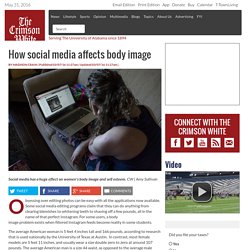 Some social media editing programs claim that they can do anything from clearing blemishes to whitening teeth to shaving off a few pounds, all in the name of that perfect Instagram. For some users, a body image problem exists when filtered Instagram feeds become reality in some students. The average American woman is 5 feet 4 inches tall and 166 pounds, according to research that is used nationally by the University of Texas at Austin. In contrast, most female models are 5 feet 11 inches, and usually wear a size double zero to zero at around 107 pounds.

The average American man is a size 44 waist, as opposed to the average male model’s size of 40 waist. Does social media impact on body image? Image copyright Thinkstock Magazines and television are often blamed for portraying an ideal body image that causes people to question their looks and lose confidence in themselves. 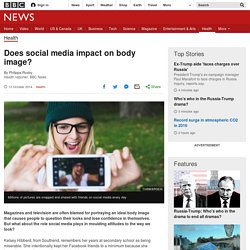 But what about the role social media plays in moulding attitudes to the way we look? Kelsey Hibberd, from Southend, remembers her years at secondary school as being miserable. She intentionally kept her Facebook friends to a minimum because she knew they were the ones who wouldn't pick on her. "I'd always been tall, and I was a bit podgy too," she says. "No-one seemed to notice at primary school, but then in Year 7 everyone started pointing at me, noticing things, making me think I was ugly and not special. " Exposure to Mass Media...