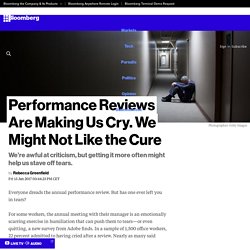 But has one ever left you in tears? For some workers, the annual meeting with their manager is an emotionally scarring exercise in humiliation that can push them to tears—or even quitting, a new survey from Adobe finds. In a sample of 1,500 office workers, 22 percent admitted to having cried after a review. Nearly as many said they'd quit.

More men said they'd cried than women. "The traditional review is based on rating and ranking, and there is an element of subjectivity. Nobody involved in performance reviews likes the process. Many other companies besides Adobe—including Accenture, General Electric, and Gap—have done away with the yearly check-in and numerical rankings and switched to giving employees more regular feedback, which employees say they want. And more regular feedback doesn't get at the crux of the problem: People are awful at both giving and getting criticism. Giving feedback more regularly can also help soften the blow. Signs you're in the wrong job - INSIDER. Maybe it's time to move on. 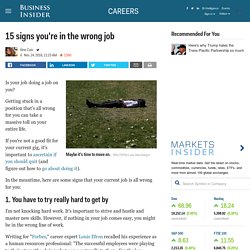 REUTERS/Luke MacGregor Is your job doing a job on you? Getting stuck in a position that's all wrong for you can take a massive toll on your entire life. If you're not a good fit for your current gig, it's important to ascertain if you should quit (and figure out how to go about doing it). In the meantime, here are some signs that your current job is all wrong for you: 1.

I'm not knocking hard work. Writing for "Forbes," career expert Louis Efron recalled his experience as a human resources professional: "The successful employees were playing to their strengths, doing what came naturally to them. 2. As the Bangles noted in "Manic Monday," Sunday should be a fun day (and maybe even a productive day, if you're feeling fancy)!

Sure, it's fine to be a little sad that the weekend's over. 3. Everyone has bad days at work — even people who thoroughly enjoy their jobs! Uk.businessinsider. Small tweaks to how quickly you fire off emails, take breaks, and ask questions can make all the difference in how happy, productive, and effective you are at work. 1. 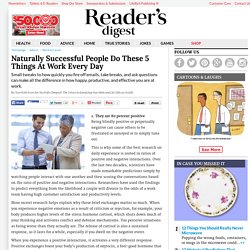 They are 80 percent positive Being blindly positive or perpetually negative can cause others to be frustrated or annoyed or to simply tune out. This is why some of the best research on daily experience is rooted in ratios of positive and negative interactions. Over the last two decades, scientists have made remarkable predictions simply by watching people interact with one another and then scoring the conversations based on the ratio of positive and negative interactions. Researchers have used the findings to predict everything from the likelihood a couple will divorce to the odds of a work team having high customer satisfaction and productivity levels. More recent research helps explain why these brief exchanges matter so much. 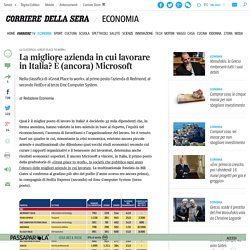