How maths can get you locked up. Colombia Farc ceasefire: The man who photographed a little-pictured war. Image copyright Jesus Abad Colorado Colombians are deciding whether to sign up to a ceasefire with the Farc rebel group, and put an end to more than 50 years of war. 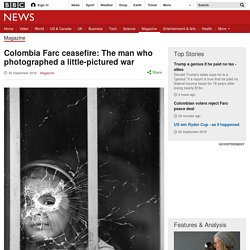 One photographer - Jesus Abad Colorado Lopez - documented the violence in his images over many years, as his former colleague, the BBC's Juan Carlos Perez Salazar, explains. Strangely, despite the Colombian war's longevity, there are very few defining images recording it. Ken Livingstone stands by Hitler comments. Ken Livingstone has stood by his recent comments about Hitler, saying he was "not sorry for telling the truth". 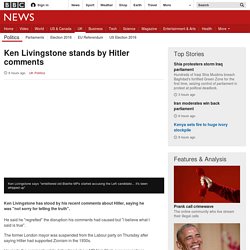 A Point of View: Is there still any point collecting books? Image copyright iStock A lifetime of collecting books has left the writer Howard Jacobson with back injuries, a lack of living space and a sense of sheer pointlessness. 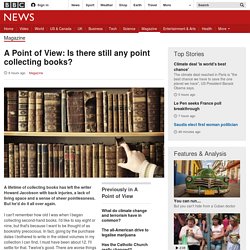 But he'd do it all over again. I can't remember how old I was when I began collecting second-hand books. I'd like to say eight or nine, but that's because I want to be thought of as bookishly precocious. In fact, going by the purchase dates I bothered to write in the oldest volumes in my collection I can find, I must have been about 12.

My father wasn't so sure. My mother was a reader and understood my passion, but she too had her objections. A Point of View: Why we should defend the right to be offensive - BBC News. Image copyright iStock Free speech can make for uncomfortable listening, argues Roger Scruton, but it needs to be defended even when it gives offence. 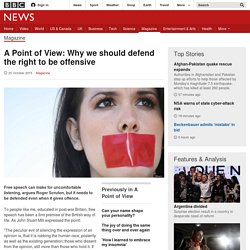 To people like me, educated in post-war Britain, free speech has been a firm premise of the British way of life. As John Stuart Mill expressed the point: Has America already had a female president? - BBC News. Image copyright ALAMY In a year's time, as the US presidential election nears its climax, it's possible Hillary Clinton will be the Democratic Party's candidate, with a chance of becoming the first female president. 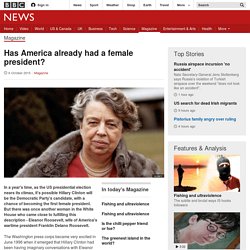 But there was once another woman in the White House who came close to fulfilling this description - Eleanor Roosevelt, wife of America's wartime president Franklin Delano Roosevelt. The Washington press corps became very excited in June 1996 when it emerged that Hillary Clinton had been having imaginary conversations with Eleanor Roosevelt. Reporters portrayed these motivational chats as supernatural seances. Even her husband, Bill Clinton, joked recently that his wife used to "commune" with this previous Democratic first lady who'd died in 1962. Hillary Clinton has always been at pains to explain in her various memoirs that she was simply looking for comfort from a woman who "inspired and fortified" her. Image copyright AFP Image copyright Getty Images. Edward Snowden interview: 'Smartphones can be taken over' - BBC News.

Smartphone users can do "very little" to stop security services getting "total control" over their devices, US whistleblower Edward Snowden has said. 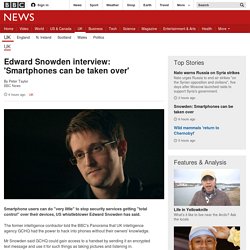 The former intelligence contractor told the BBC's Panorama that UK intelligence agency GCHQ had the power to hack into phones without their owners' knowledge. Mr Snowden said GCHQ could gain access to a handset by sending it an encrypted text message and use it for such things as taking pictures and listening in. Andy Burnham: timid Labour would not be up to creating the NHS today.

Andy Burnham will try to tap into the surge in support for Jeremy Corbyn by warning that the modern Labour party has become “frightened of its own shadow” and would lack the courage to create the NHS today. 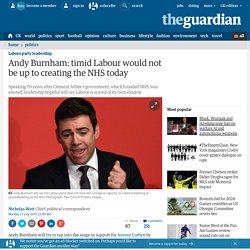 Wading into the debate prompted by Corbyn’s unexpected popularity, Burnham, one of the four leadership candidates, will argue on Tuesday that Labour has abandoned its radical roots. Speaking to mark the 70th anniversary of the election of Clement Attlee’s government, the shadow health secretary will say: “You would think that would be cause for joyous celebration, but I mark it with a sad realisation that the modern Labour party could not have created the NHS. “It has become frightened by its own shadow and does not have the courage or capacity to do it. It has become a purveyor of retail politics, trading in the devalued currency of policy gimmicks designed to grab a quick headline but which don’t change the world.” Noam Chomsky: Why the Internet Hasn't Freed Our Minds. Three decades ago, Professor Noam Chomsky, who is seen by some as the most brilliant and courageous intellectual alive and by others as an anti-US conspiracy theorist, penned his powerful critique of the Western corporate media in his seminal book Manufacturing Consent, with co-author Edward S Herman. 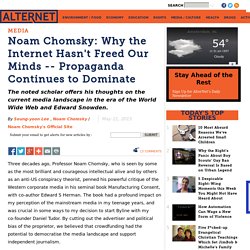 The book had a profound impact on my perception of the mainstream media in my teenage years, and was crucial in some ways to my decision to start Byline with my co-founder Daniel Tudor. By cutting out the advertiser and political bias of the proprietor, we believed that crowdfunding had the potential to democratise the media landscape and support independent journalism. In “Manufacturing Consent,” Noam Chomsky posits that Western corporate media is structurally bound to “manufacture consent” in the interests of dominant, elite groups in society.