Literature and the arts

6 Great Novels that Were Hated in Their Time. Raise your hand if you ever had to read a classic novel in school, only to come away hating it. 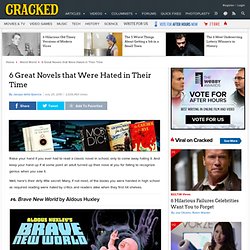 And keep your hand up if at some point an adult turned up their nose at you for failing to recognize genius when you saw it. Well, here's their dirty little secret: Many, if not most, of the books you were handed in high school as required reading were hated by critics and readers alike when they first hit shelves. Brave New World by Aldous Huxley The Story You Know: It's Aldous Huxley's chilling 1932 tale about a future centered upon sex, drug, and assembly-line worship, depicting humanity caught in an endless cycle of buying gizmos, working trivial jobs and taking drugs to make the depression go away. Unfortunately, its main characters do not look this awesome. A Point of View: Tom Ripley and the meaning of evil. Patricia Highsmith's Ripley novels are classics of crime literature. 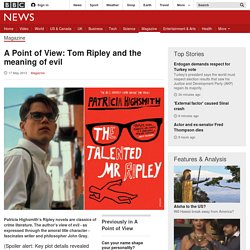 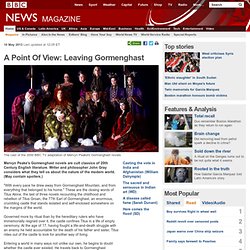 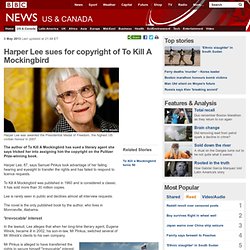 Harper Lee, 87, says Samuel Pinkus took advantage of her failing hearing and eyesight to transfer the rights and has failed to respond to licence requests. To Kill A Mockingbird was published in 1960 and is considered a classic. It has sold more than 30 million copies. Lee is rarely seen in public and declines almost all interview requests. Shakespeare's identity is much less interesting than his plays.

Casanova unveiled: new edition of his book reveals the man who loved liberty as much as women. Rufus Sewell: almost famous. There was a moment in the mid-1990s when Rufus Sewell's international stardom was assured. 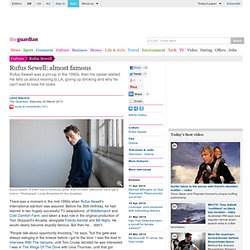 Before his 30th birthday, he had starred in two hugely successful TV adaptations, of Middlemarch and Cold Comfort Farm, and taken a lead role in the original production of Tom Stoppard's Arcadia, alongside Felicity Kendal and Bill Nighy. He would clearly become stupidly famous. Shakespeare scholars unite to see off threat of the 'Bard deniers' A group of 22 of the world's leading Shakespeare scholars have come together to produce a book that details what they consider to be definitive evidence that the Bard really did write his own plays. 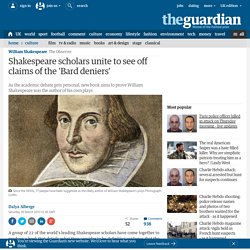 Jane Austen's Pride and Prejudice anniversary stamps on sale. 20 February 2013Last updated at 19:14 ET Royal Mail commissioned the artwork from illustrator Angela Barrett A set of Jane Austen stamps has gone on sale to mark the 200th anniversary of her novel Pride And Prejudice. 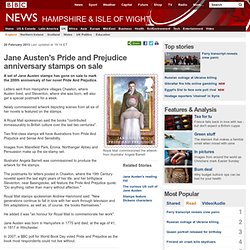 Letters sent from Hampshire villages Chawton, where Austen lived, and Steventon, where she was born, will also get a special postmark for a week. Newly commissioned artwork depicting scenes from all six of her novels is featured on the stamps. A Royal Mail spokesman said the books "contributed immeasurably to British culture over the last two centuries". Pride And Prejudice Study Reveals Modern Parents Rely On Daughters To Support Husbands (PICTURES) If you watched Bridget Jones's Diary back in 2001, it wasn't entirely clear whether matters had gotten better, or worse, for women in the centuries since the publication of the film's inspiration, Pride and Prejudice. 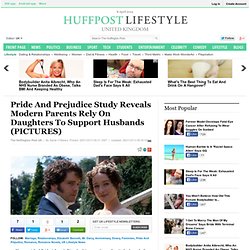 Bridget's desire to leave behind her chaotic, single existence and form a stable future filled with minibreaks, echoed the historic female preoccupation with securing domestic security by finding a man. Yet, on the 200-year anniversary of the publication of Austen's witty tale about the economics of romance, an interesting survey by Scottish Widows has revealed the new relationship advice Mr Bennet would now be giving his five daughters for the future. 11 Things That Jane Austen Said That Make Us Love Her. Janeites: The curious American cult of Jane Austen. 27 January 2013Last updated at 20:12 ET By Jon Kelly BBC News Magazine, Washington DC The film Austenland explores the world of Janeites Two centuries after her most famous work, Jane Austen inspires huge devotion in the US. 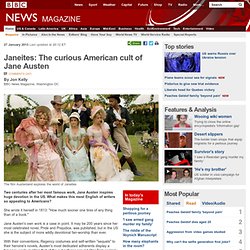 What makes this most English of writers so appealing to Americans? To kill, or not to kill? Many of us turn to Shakespeare’s plays and poems for pleasure. 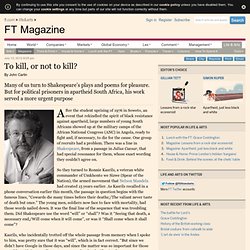 But for political prisoners in apartheid South Africa, his work served a more urgent purpose After the student uprising of 1976 in Soweto, an event that rekindled the spirit of black resistance against apartheid, large numbers of young South Africans showed up at the military camps of the African National Congress (ANC) in Angola, ready to fight and, if necessary, to die for the cause. One group of recruits had a problem. BBC Radio 4 - The Invention of Spain. 340 cipher solution. This is what I came up with: "I will make this very clear. My one reason I am killing. Breakthrough in world's oldest undeciphered writing. Pink Floyd - Echoes / Live at Pompeii ( full )

Chaucer Texts Online. Ancient Poem Praises Murderous Roman Emperor Nero. A just-deciphered ancient Greek poem discovered in Egypt, deifies Poppaea Sabina, the wife of the infamous Roman emperor Nero, showing her ascending to the stars. Based on the lettering styles and other factors, scholars think the poem was written nearly 200 years after Nero died (about 1,800 years ago), leaving them puzzled as to why someone so far away from Rome, would bother composing or copying it at such a late date.

In the poem, Poppaea ascends to heaven and becomes a goddess. The ancient goddess Aphrodite says to Poppaea, "my child, stop crying and hurry up: with all their heart Zeus' stars welcome you and establish you on the moon... "