Visit Poland: Wrocław and The Dwarfs. 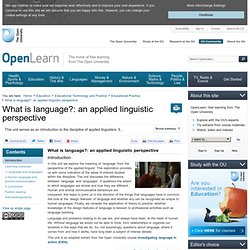 This exploration provides us with some indication of the areas of interest studied within the discipline. The unit discusses the difference between ‘language’ and ‘languages’. It questions the extent to which languages are similar and how they are different. Human and animal communicative behaviours are compared; this helps to point us in the direction of the things that languages have in common. We look at the ‘design features’ of language and whether any can be recognised as unique to human languages.

Language and problems relating to its use are, and always have been, at the heart of human life. This unit is an adapted extract from the Open University course Investigating language in action (E854)15 [Tip: hold Ctrl and click a link to open it in a new tab. The Psychology of Getting More Done (in Less Time) In today’s busy world, we’ve become a people obsessed with productivity and “work hacks.” 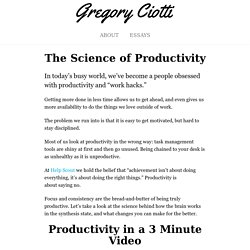 Getting more done in less time allows us to get ahead, and even gives us more availability to do the things we love outside of work. The problem we run into is that it is easy to get motivated, but hard to stay disciplined. Most of us look at productivity in the wrong way: task management tools are shiny at first and then go unused. Being chained to your desk is as unhealthy as it is unproductive. At Help Scout we hold the belief that “achievement isn’t about doing everything, it’s about doing the right things.” Focus and consistency are the bread-and-butter of being truly productive.

Productivity in a 3 Minute Video I collaborated with Mitchell Moffit of the ASAPscience team to create the above video. Click play to learn… Watch and enjoy. Once you’ve done that, if you’re still itching to know more just scroll down: a dozen studies and far more explanation await. Abandon All Willpower, Ye Who Enter Here. Why You Learn More Effectively by Writing Than Typing. How Handwriting Boosts the Brain. How-different-will-classrooms-of-the-future-be_502919b21b9d4.jpg (2385×1124) Bosses Behaving Badly. Barbara Pachter has seen it all. 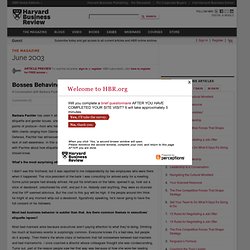 President of Pachter & Associates, a consultancy specializing in etiquette and gender issues, she’s coached executives around the world on the finer and grosser points of protocol—from who holds open the door for whom to how to tell the boss his fly is down. With clients ranging from DaimlerChrysler, IBM, and Pfizer to NASA and the Department of Defense, Pachter has witnessed all manner of etiquette blunder. The common thread: executives’ lack of self-awareness. In this conversation, edited here for length, HBR’s Gardiner Morse spoke with Pachter about how etiquette rules are evolving and the fundamentals that every executive should know. What’s the most surprising etiquette violation you’ve seen? I didn’t see this firsthand, but it was reported to me independently by two employees who were there when it happened.

Most bad business behavior is subtler than that. Most bad manners arise because executives aren’t paying attention to what they’re doing. US shutdown: 10 unexpected consequences. 4 October 2013Last updated at 04:15 ET By Tom Geoghegan BBC News, Washington A closed sign on national parks and monuments across the US is the most visible consequence of a budget wrangle that has caused large parts of the government to shut down. 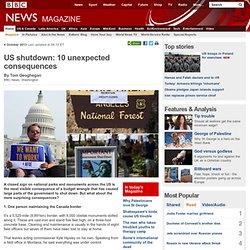 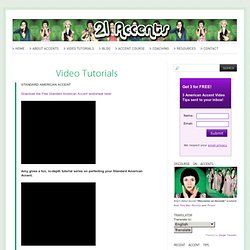