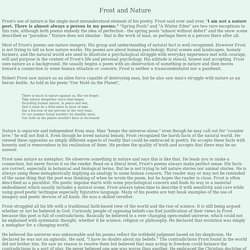 Frost said over and over, "I am not a nature poet. There is almost always a person in my poems. " "Spring Pools" and "A Winter Eden" are two rare exceptions to this rule, although both poems embody the idea of perfection - the spring pools "almost without defect" and the snow scene described as "paradise. " Poetry Foundation. American Transcendentalism. American transcendentalism was an important movement in philosophy and literature that flourished during the early to middle years of the nineteenth century (about 1836-1860). 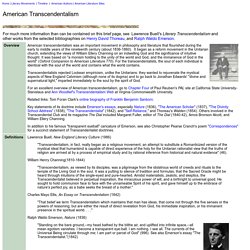 It began as a reform movement in the Unitarian church, extending the views of William Ellery Channing on an indwelling God and the significance of intuitive thought. It was based on "a monism holding to the unity of the world and God, and the immanence of God in the world" (Oxford Companion to American Literature 770). The Walden Woods Project – The Walden Woods Project preserves the land, literature and legacy of the quintessential American author, philosopher, and naturalist, Henry David Thoreau, to foster an ethic of environmental stewardship and social responsibilit. Conflict in Victorian Verse and Prose: Hardy and Others. Introduction The term "conflict," the driving force behind any plot, indicates the clash of wills, desires, goals, tastes, or physical forces that animates the plot of a literary text and generates suspense, thereby engaging the readers in the action of the text as they anticipate the outcome of the conflict. 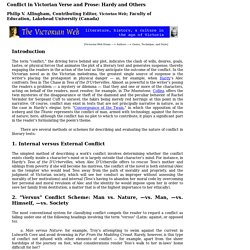 In the Victorian novel as in the Victorian melodrama, the greatest single source of suspense is the writer's placing the protagonist in physical danger — as, for example, when Hardy's Alec confronts Tess in The Chase in Tess of the D'Urbervilles. Almost as powerful is the writer's posing the readers a problem — a mystery or dilemma — that they and one or more of the characters, acting on behalf of the readers, must resolve; for example, in The Moonstone, Collins offers the twin mysteries of the disappearance or theft of the diamond and the peculiar behavior of Rachel Verinder for Sergeant Cuff to unravel, the fakirs being merely red herrings at this point in the narrative. 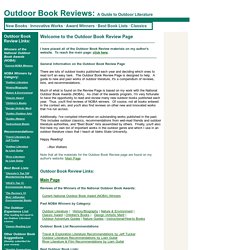 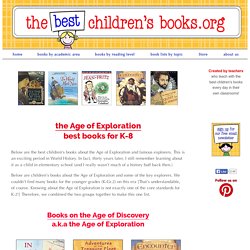 This is an exciting period in World History. In fact, thirty years later, I still remember learning about it as a child in elementary school (and I really wasn't much of a history buff back then.) Below are children's books about the Age of Exploration and some of the key explorers. We couldn't find many books for the younger grades (K-Gr.2) on this era [That's understandable, of course. The 100 Greatest Adventure Books of All Time. 1. 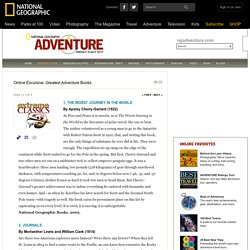 The Worst Journey in the World By Apsley Cherry-Garrard (1922) As War and Peace is to novels, so is The Worst Journey in the World to the literature of polar travel: the one to beat. The author volunteered as a young man to go to the Antarctic with Robert Falcon Scott in 1910; that, and writing this book, are the only things of substance he ever did in life. Outdoor Literature Reading List. Best Book List: The Outdoor Experience The following is a list of books that I use for an Outdoor Literature class that I teach at Idaho State University. 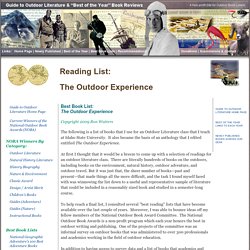 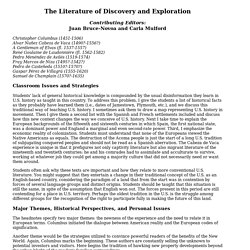 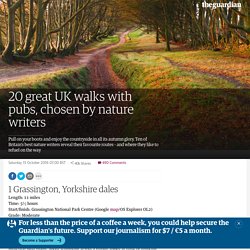 There’s something about the crumpled-duvet landscapes of emerald field and heathery fell, about encountering its sudden, Shire-like valleys threaded with muscular peat rivers, about stumbling across a ruined abbey at dusk or drinking well-earned beers by pub fires that forever sticks in the head and the heart. Read the Tree Leaves, With an Artist's Invented Tree Font. The phrase “about trees,” shown in the font Tree. 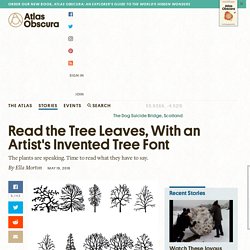 The book About Trees, now being reprinted after selling out its first small run last year is, as the title says, about trees. Like other books, it’s also printed on trees, in the form of paper. Unlike any other book, it’s printed in Trees, an arboreal font in which each letter corresponds to a different type of towering plant. Creator Katie Holten, an Irish artist, describes About Trees as a “recycling” of texts that, considered together, provoke much thought about the relationship between humans and nature.

The 256-page book contains tree-themed works by prominent authors and other luminaries, from Plato to Radiohead, via Jules Verne, Charles Darwin, and Zadie Smith. We're All a Little Ecosexual. "It's more about breaking down separations between humans and nature. " Photo: Getty Images/iStockphoto Together, Beth Stephens and Annie Sprinkle are perhaps the best-known advocates of ecosexuality, a sliding-scale term used to describe the various interactions of the environment and human sexuality. Stephens and Sprinkle didn’t coin the word—it was previously used to describe dating an environmentally conscious person—and the basic idea has been around for centuries in various cultures and religions.

In the past decade alone, they say, the number of people who identify as ecosexual has grown from less than 1,000 to more than 100,000. But the duo did create the Ecosex Manifesto, in 2011, which outlines both how much they love the earth and how to interact with it. Supplementary information: Man and Nature in English Literature. Note: supplementary information in italics. 1. The Chain of Being: Nature as a hierarchical system. In the Middle Ages the universe was seen as a perfectly ordered system of concentric circles with the Earth at its centre. Each circle corresponded to the orbit of the known planets, with the stars at the outer level. Modernism and Nature. Savoy Vase, Alvar Aalto (1898 1976), manufactured by Karhula Lasitehtaalla, Karhula, Finland, 1936. Museum no. C.226–1987 During the 1930s many designers and architects, especially the more avant-garde, turned away from mainstream Modernism.

Eschewing objectivity, geometry and machine imagery, they shifted their attention to Nature. Here they found organic, curvilinear forms and a more satisfying outlet for their emotional and psychological needs. Nature and the Romantic Poet - Arts and Humanities. Romanticism was an extensive artistic and intellectual movement, described by Isaiah Berlin as ‘the greatest single shift in the consciousness of the West that has occurred’[1].

Originating in late eighteenth-century Europe, it challenged the Age of Enlightenment’s scientific and rational, objective ideas, and instead promoted the power of individual imagination and subjective experience. Nature was a predominant Romantic theme in the light of the Industrial Revolution, which not only posed a threat to its preservation, but also prompted a rise in local countryside tourism to escape the expanding urban areas. Poets sought to demonstrate this through, as Carl Thompson observes, their ‘appreciation of landscape, and especially of wild or what was often termed “romantic” scenery’[2] in their work. Romanticism, Nature, Ecology. The connection between Romanticism and ecology has often been recognized in the critical literature on Romanticism and in the writings of ecologists and naturalists.

Recently Jonathan Bate, Karl Kroeber, Jim McKusick, Onno Oerlemans, and Kate Rigby have published important books on the subject,[1] and The Wordsworth Circle, Studies in Romanticism, and Romantic Circles Praxis Series have published special issues on the topic.[2] By and large, these books and the articles in the collections argue that we can trace the origins of our current ecological thinking to European Romanticism in general, and sometimes to British and American Romanticism in particular. A similar trend to link various strands of our current environmental thinking to Romantic ur-texts may be found in the works of environmental historians, geographers, and environmentalists, such as Neal Evernden, Max Oelschlager, I. G. Simmons, and Donald Worster, among others. Bate, Jonathan. Nature Poems.