"Technology adds an incredible advantage to fashion design". Fashion and technology: in the first part of a series focusing on designers who are introducing the fashion world to new technologies, Dezeen speaks to architect Julia Körner about how advances in 3D scanning, modelling and printing are creating a "revolution in customised fashion pieces within ready to wear" (+ interview + slideshow). 3D-printed garments have become a common sight on the Haute Couture catwalks of designers like Dutch fashion designer Iris van Herpen. 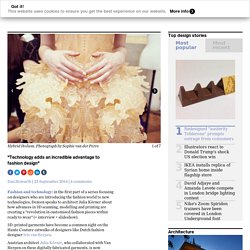 Austrian architect Julia Körner, who collaborated with Van Herpen on these digitally fabricated garments, is now working on transferring the technology used to create the elaborate garments into everyday clothing production as part of what she calls an "exciting moment in fashion design". 6 Technology Trends That Will Impact Fashion Industry. You're reading Entrepreneur India, an international franchise of Entrepreneur Media. 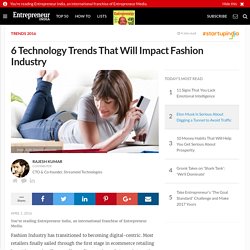 Fashion Industry has transitioned to becoming digital-centric. Most retailers finally sailed through the first stage in ecommerce retailing by setting up visually appealing online versions of stores, integrating payment gateways and offering efficient delivery logistics. Over the next two years, there are several areas where technology will help ease online discovery and conversions. Technology will make it easy for consumers to go from inspiration to purchase. Customers see a lovely handbag at a party and technology will help them find it. T H E U N S E E N. T H E U N S E E N is a material exploration house that blends science into materials; focused on seeing the unseen. 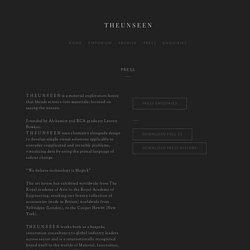 Founded by Alchemist and RCA graduate Lauren Bowker. T H E U N S E E N uses chemistry alongside design to develop simple visual solutions applicable to everyday complicated and invisible problems, visualizing data by using the primal language of colour change. “We believe technology is Magick” The art house has exhibited worldwide from The Royal academy of Arts to the Royal Academy of Engineering, stocking our luxury collection of accessories (made in Britain) worldwide from Selfridges (London), to the Cooper Hewitt (New York). TH E U N S E E N works both as a bespoke innovation consultancy to global industry leaders across sector and is a internationally recognized brand itself in the worlds of Material, Innovation, Art, Science, fashion and Design. Four brands storming the world of fashion and technology.

Once again the fashionistas are descending for London fashion week. 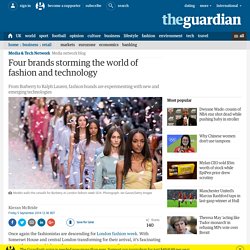 With Somerset House and central London transforming for their arrival, it’s fascinating to see the way in which we the consumer can now access the sometime previously rarified air of the fashion world. Fashion’s evolving – not just into more and more extreme sights on the catwalk – but behind the scenes too, as brands adapt to new consumer expectations around how, when and why they want to interact. How technology is forging a new generation of fashion shows.

When Christian Dior presented his first collection to the press nearly seven decades ago, it was his New Look designs that had the fashion world buzzing for their radical (if not scandalous) forms. 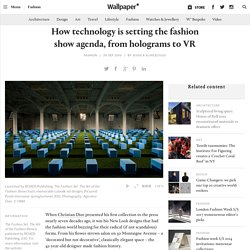 From his flower-strewn salon on 30 Montaigne Avenue – a ‘decorated but not decorative’, classically elegant space – the 42-year-old designer made fashion history. These days, in a world where social media rules, fashion brands are devoting the same painstaking craftsmanship into increasingly ambitious show sets as they do their collections – with budgets to match. Shows have become an essential extension of brands, with dazzling installations, bespoke soundtracks, and multi-sensory experiences deemed the new standard. From orchestras to neon basketball courts, fashion houses are embroiled in a game of one-upmanship designed to cater to a global tech-centric audience.

A New Device Could Make Memory Implants a Reality. Total Recall Memories are the faintest, most ethereal wisps of our neurophysiology — somehow, the firing of delicate synapses and the activation of neurons combine to produce the things we remember. 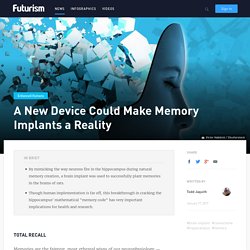 The sum of our memories make us who we are; they are us, in every way, and without them we cease to be. So it’s needless to say that there’s a pretty significant premium on discovering new ways to combat memory loss. Mind Control Device Demonstration - Tan Le. New pyjamas could prevent cot deaths / TTP2 / Space Engineering & Technology. New pyjamas could prevent cot deaths Mamagoose will help to prevent and understand SIDS 26 September 2001. 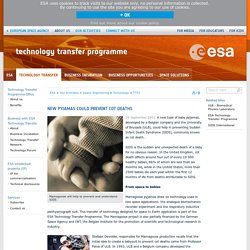 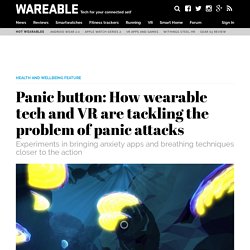 They can make you feel like you're going to die, like you're having a heart attack, as if you're losing your mind. They are also more common than you might think. According to the NHS, at least one in 10 British people experiences occasional panic attacks. So if you haven't had one yourself, you probably know someone who has.

This $40,000 Robotic Exoskeleton Lets the Paralyzed Walk. Paralyzed from the waist down after a BMX accident, Steven Sanchez rolled into SuitX’s Berkeley, California, office in a wheelchair. 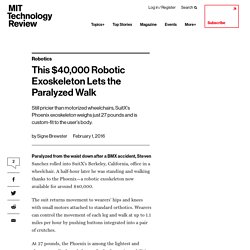 A half-hour later he was standing and walking thanks to the Phoenix—a robotic exoskeleton now available for around $40,000. The suit returns movement to wearers’ hips and knees with small motors attached to standard orthotics. This $40,000 Robotic Exoskeleton Lets the Paralyzed Walk. Assistive technology - Alzheimer's Society.

Assistive Technology has the potential to offer benefits to people with dementia and their carers in specific circumstances. 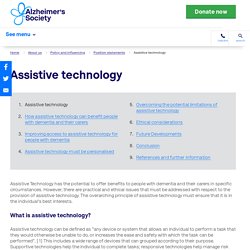 Examples of assistive technology include: A Next-Level Smartwatch That Detects Seizures. Advertisement Matteo Lai is certain he could build one of the best fitness trackers on the market. It’s just that he has no interest in making the next Fitbit. “The wearable space is so noisy,” says the CEO of Empatica, a company in Cambridge, Mass., focused on measuring human data. Technically, Lai is in the wearables business.

Bracelets and Devices for Epilepsy. Part 1 of 8 What is epilepsy? Epilepsy is a condition that affects a person’s brain activity. This can lead to seizures and other serious complications. Apple app update will help you track down lost AirPods. An update to Find My iPhone will let users track down their AirPod earphonesThey will also be able to play a sound through the earphones to help locate them Members of the public around the world will start to receive the update shortly The feature will be available on iPhone, iPad, or iPod Touch with the software iOS 10.3 or later By Abigail Beall For Mailonline Published: 18:36 GMT, 24 January 2017 | Updated: 23:52 GMT, 24 January 2017.

New app can tell when you're about to get the flu. An app that can warn you up to half a day in advance that you’re going to fall ill is being developed by scientists. It uses information from wearable health trackers which monitor heart rate and body temperature via the likes of an Apple Watch, to tell individuals they are about to suffer an illness such as the flu. The app uses information from a smartwatch to determine whether individuals are about to suffer from an illness, such as the flu. 'nature amplified' apparel by NIKE. Jul 19, 2013 NIKE's new 'nature amplified' apparel top image: NIKE aeroloft 800 vestall images courtesy NIKE as part of the NIKE‘s 2013 innovation summit the brand presented key pieces from its new range of apparel products, such as the NIKE aeroloft 800 vest, an ultra-light insulating layer composed of perforated down.