5 Uses of Magnets for Kids. Kids can have fun while learning about the varied and important uses of magnets in the world around them. Common uses of magnets include the compass, vending machines, refrigerator magnets and electric motors. Some types of trains even levitate above magnetized rails! Without magnets, the world would be a very different place. Compass A compass uses a magnet to direct its needle to the north pole. Mag-Lev Trains Magnetically levitated trains, known as mag-lev trains, use magnets under the cars to float above the magnetic tracks because the magnets are repelling each other. Vending Machines Coins are separated and sorted inside vending machines with magnets. Holding Things One of the most common uses of magnets is to hold things together.

Electric Motors. Uses-magnets-daily-life-8056272. 10 Uses for Magnets. In the 6th century B.C., Thales of Miletus, a Greek wise man, reasoned that a magnet's power of attraction was the result of science, not magic. 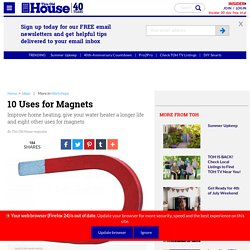 After that, it was only a matter of time (okay, a few millennia) before magnets turned up in TVs, turbines, computer hard drives, and on the fronts of fridges everywhere. Their stick-to-itiveness—in the form of iron horseshoes, shiny rare-earth bars, or vinyl-coated magnetic sheets—is also helpful for a host of household projects. Use magnets to: 1. Locate metal studs in a wall. 2. 3. 4. 11 Weird & Wonderful Uses for Magnets « The Secret Yumiverse. Other than sticking your crayon drawings onto your refrigerator door, magnets have a variety of unexpected and sometimes surprisingly practical uses, ranging from keeping your chip bags sealed to creating weird patterns on your nail beds using magnetic nail polish. 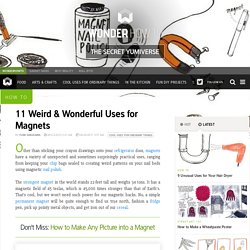 The strongest magnet in the world stands 22-feet tall and weighs 34 tons. It has a magnetic field of 45 teslas, which is 45,000 times stronger than that of Earth's. That's cool, but we won't need such power for our magnetic hacks. No, a simple permanent magnet will be quite enough to find us true north, fashion a fridge pen, pick up pointy metal objects, and get iron out of our cereal. 1Find True North with a Magnet So you need to find true north but you're without a compass and the sky and sun are covered with clouds. To go about finding north on Earth's axis, rub the pin across the magnet 50 times in the same direction. What Are Magnets Used For. Magnetism and Electromagnetism Tutorial. Bill Nye - Magnetism.

Facts For Kids, Science « Kinooze. Image Credit: Flickr User sparr0, via CC Have you ever played with magnets? 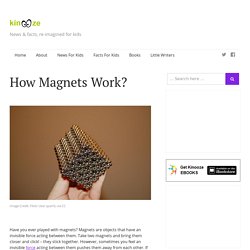 Magnets are objects that have an invisible force acting between them. Take two magnets and bring them closer and click! – they stick together. However, sometimes you feel an invisible force acting between them pushes them away from each other. The two ends of every magnet are called poles. Image Credit: Flickr User AJC1, via CC Reminds me of a joke. One magnet to the other – Are you attracted to me? Ha ha!! Every magnet has an area around it that is referred to as the magnetic field. Two magnets out of each other’s magnetic field will not attract each other. Why do magnets behave the way they do? Some people have a very powerful personality that other people get drawn towards instinctively.

Magnet and Magnetism. How Do Magnets Work? I'm sure you've heard the phrase 'opposites attract.' Magnets work pretty much the same way. 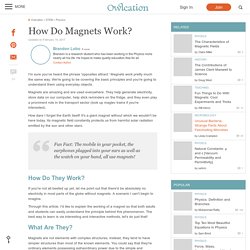 We're going to be covering the basic principles and you're going to understand them using everyday objects. Magnets are amazing and are used everywhere. They help generate electricity, store data on our computer, help stick reminders on the fridge, and they even play a prominent role in the transport sector (look up maglev trains if you're interested). How dare I forget the Earth itself! How Do They Work? If you're not all beefed up yet, let me point out that there'd be absolutely no electricity in most parts of the globe without magnets.

Through this article, I'd like to explain the working of a magnet so that both adults and students can easily understand the principle behind this phenomenon. What Are They? Magnets are not elements with complex structures, instead, they tend to have simpler structures than most of the known elements. Ferromagnetic Substances Understanding Dipoles. Curious Kids: How and why do magnets stick together?

This is an article from Curious Kids, a series for children. 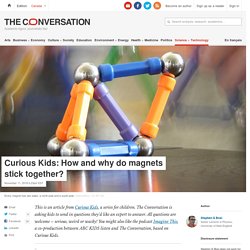 The Conversation is asking kids to send in questions they’d like an expert to answer. All questions are welcome – serious, weird or wacky! You might also like the podcast Imagine This, a co-production between ABC KIDS listen and The Conversation, based on Curious Kids. Hi my name is Dean and I am 7 years old. My question is: How and why do magnets stick together? Hi Dean! This is a good question and a bit tricky to answer, but I’ll try my best. Magnetism for kids - A simple introduction.