XAML. WPF. C# Office 365. Silverlight. LightSwitch. Azure. Visual Basic. ASP.NET. Xamarin. Telerik UI for WinForms. How entry level developers are being squeezed out of the job field, and what they can do about it. By all measures that I have seen, the job market and demand for developers is doing well. 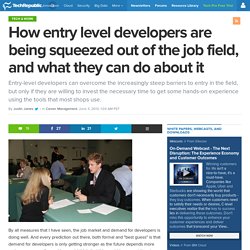 And every prediction out there, both formal and "best guess" is that demand for developers is only getting stronger as the future depends more and more upon software. You would think that this would be a great time to come onto the job market, but unfortunately this isn't so. It is increasingly difficult to get work as an entry-level developer, and without a major shift in how most software is developed, it will only get harder. The culprits here are primarily .NET and Java, though the increasingly complex nature of Web development in general isn't guiltless either.

The languages themselves are getting more complex over time. Look, I think LINQ is awesome, but the fact is, I had to read a fairly long, in-depth book to learn it. Part 1 - Introduction to Windows Forms. Windows Forms, Database-Driven App Tutorial (Part 1 / 5) Need a Windows Forms book? - Simon's Mu-zings. Visual Studio 2015 » Grey Matter. HardCopy Issue: 67 | Published: November 6, 2015 Microsoft’s platform is changing, and Visual Studio, the all-encompassing development tool, is changing with it. 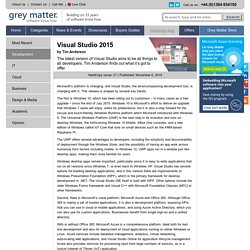 This release is shaped by several key trends. The first is Windows 10, which has been rolling out to customers – in many cases as a free upgrade – since the end of July 2015. Windows 10 is Microsoft’s effort to deliver an upgrade that Windows 7 users will enjoy, unlike its predecessor, but it is also a step forward for the secure and touch-friendly Windows Runtime platform which Microsoft introduced with Windows 8. The Universal Windows Platform (UWP) is the next step in its evolution and runs on desktop Windows, the forthcoming Windows 10 Mobile, XBox One consoles, and a new edition of Windows called IoT Core that runs on small devices such as the ARM-based Raspberry Pi. BUILD A WEBSITE #1 - Installing Visual Web Developer 2010. Latest Microsoft Office Developer Tools for Visual Studio 2015. We’re pleased to announce that Update 1 for the Microsoft Office Developer Tools for Visual Studio 2015 is ready for you to install! 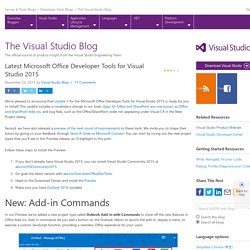 This update includes a vocabulary change in our tools, Apps for Office and SharePoint are now known as Office and SharePoint Add-ins, and bug fixes, such as the Office/SharePoint node not appearing under Visual C# in the New Project dialog. Second, we have also released a preview of the next round of improvements to these tools. We invite you to shape their future by giving us your feedback through Send-A-Smile or Microsoft Connect. You can start by trying out the new project types that you’ll see in this Preview release, as I’ll highlight in this post. Follow these steps to install the Preview: In our Preview, we’ve added a new project type called Outlook Add-in with Commands to show off the new features in Office Add-ins. Now let’s walk through a scenario to create an add-in that inserts custom text when writing emails. What is the difference between WinRT, UWP (Universal Windows Platform) and WPF? - Stop Byte. 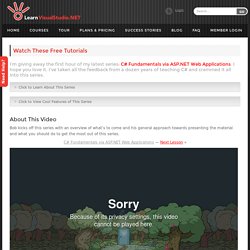 I hope you love it. I’ve taken all the feedback from a dozen years of teaching C# and crammed it all into this series. Click to Learn About This Series About This Series This series will teach you the fundamentals of the C# programming language and the .NET Framework. Click to View Cool Features of This Series. Free Online IDE and Terminal. The Official Rackspace Blog. I often get questions about writing software in .NET: Is it expensive? 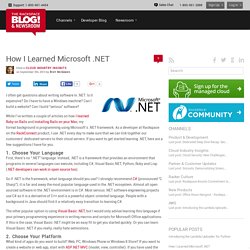 Do I have to have a Windows machine? Can I build a website? Can I build “serious” software? While I’ve written a couple of articles on how I learned Ruby on Rails and installing Rails on your Mac, my formal background is programming using Microsoft’s .NET framework. As a developer at Rackspace on the RackConnect product, I use .NET every day to make sure that we can link together our customers’ dedicated servers to their cloud servers. 1. First, there’s no “.NET” language. Visual Studio Code Tutorial for Beginners. Microsoft Visual Studio. Microsoft Visual Studio is an integrated development environment (IDE) from Microsoft. 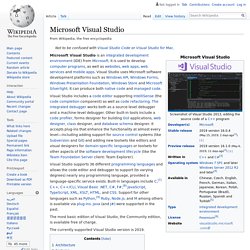 It is used to develop computer programs, as well as websites, web apps, web services and mobile apps. Visual Studio uses Microsoft software development platforms such as Windows API, Windows Forms, Windows Presentation Foundation, Windows Store and Microsoft Silverlight. It can produce both native code and managed code. The most basic edition of Visual Studio, the Community edition, is available free of charge.

What's the difference between Visual Studio Community and other, paid versions? How long will it take to learn ASP.NET & C# - .NET - The SitePoint Forums.