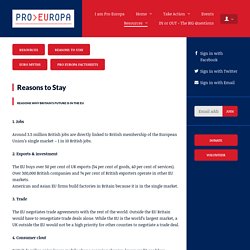 Jobs Around 3.5 million British jobs are directly linked to British membership of the European Union’s single market – 1 in 10 British jobs. 2. Exports & investment The EU buys over 50 per cent of UK exports (54 per cent of goods, 40 per cent of services).Over 300,000 British companies and 74 per cent of British exporters operate in other EU markets.American and Asian EU firms build factories in Britain because it is in the single market. 3.

What Did the Hippies Want? I wrote this essay at the request of curator Neil Kramer, with whom I co-founded the (now defunct) online Hippie Museum. 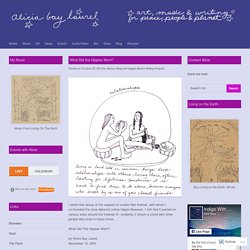 I still find it posted on various sites around the Internet Â– evidently it struck a chord with other people who lived in those times. What Did The Hippies Want? By Alicia Bay Laurel November 19, 2001 We wanted intimacyÂ– not a neighborhood where you didnÂ’t know anyone on the block, or you competed, kept up with the Joneses. The Life and Death of the Hippie: A Dance with the Devil and the Media - Inquiries Journal. The media has always had a strong propensity to influence our opinions and behaviors, creating and destroying public images for hundreds of years. 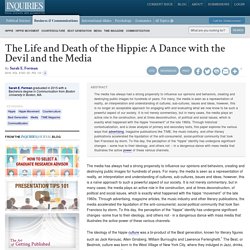 For many, the media is seen as a representation of reality, an interpretation and understanding of cultures, sub-cultures, issues and ideas, however, this is no longer an acceptable approach for engaging with and evaluating what we now know to be such a powerful aspect of our society. It is not merely commentary, but in many cases, the media plays an active role in the construction, and at times deconstruction, of political and social issues, which is exactly what happened with the hippie “movement” of the late 1960s.

The media has always had a strong propensity to influence our opinions and behaviors, creating and destroying public images for hundreds of years. 2.2. Impact on the society - Hippie Subculture. The hippie movement had a significant impact on the perspectives of American society in 60’ and 70’. 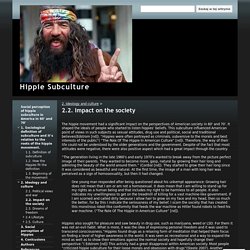 It shaped the ideals of people who started to listen hippies’ beliefs. This subculture influenced American point of views in such subjects as sexual attitudes, drug use and political, social and traditional believes(Edstrom [nd]). The great hippie hijack: how consumerism devoured the counterculture dream – Holly Williams. Might 2015 be the year the hippies finally won? 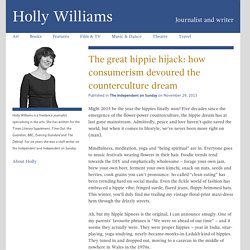 Five decades since the emergence of the flower-power counterculture, the hippie dream has at last gone mainstream. Admittedly, peace and love haven’t quite saved the world, but when it comes to lifestyle, we’ve never been more right on (man). Fashions of the 1960s - Mods, Hippies, and the Youth Culture. Hair The early 60's saw bouffant hairdos that were less exaggerated than in the late 50's. 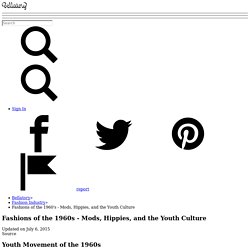 A soft, slightly pouffed bob, or shoulder length flip was teased out at the tip for volume. Even the Mods, with their sleek hairdos kept a bit of lift in the geometric cut bobs like the one worn by Mary Quant. A smooth sleekness gave way to long, straight hair, worn with or without bangs or in a center part. Wavy haired and curly haired young women had their hair straightened or ironed it flat at home. Hippie style encouraged a natural look that included long, straight hair as well as long, curly or wavy hair. Makeup. Hippies' proud legacy: peace, love, activism. June 21, 2007|By Larry Atkins What's so funny 'bout peace, love and understanding? 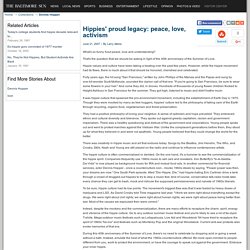 That's the question that we should be asking in light of the 40th anniversary of the Summer of Love. Hippie values and culture have been taking a beating over the past few years. However, while the hippie movement had its flaws, there is much about it that should be honored, cherished and celebrated. 1967: Pictures From a Pivotal Year. What’s a Hippie Grandma? I’d like your help here. 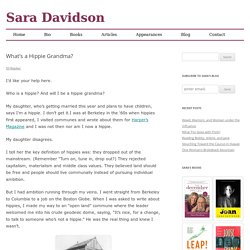 Who is a hippie? And will I be a hippie grandma? My daughter, who’s getting married this year and plans to have children, says I’m a hippie. I don’t get it.I was at Berkeley in the ‘60s when hippies first appeared, I visited communes and wrote about them for Harper’s Magazine and I was not then nor am I now a hippie. My daughter disagrees. Login to Mintel Reports - Mintel Group Ltd. Profile: The European Union. The European Union, or EU, describes itself as a family of democratic European countries, committed to working together for peace and prosperity. 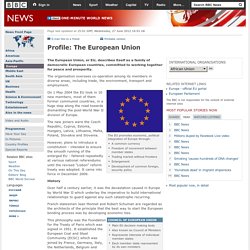 The organisation oversees co-operation among its members in diverse areas, including trade, the environment, transport and employment. On 1 May 2004 the EU took in 10 new members, most of them former communist countries, in a huge step along the road towards dismantling the post-World War II division of Europe. The new joiners were the Czech Republic, Cyprus, Estonia, Hungary, Latvia, Lithuania, Malta, Poland, Slovakia and Slovenia. However, plans to introduce a constitution - intended to ensure the smooth running of the enlarged EU - faltered repeatedly at various national referendums until the revised "Lisbon" reform treaty was adopted. It came into force in December 2009. History. Hippies Won the Culture War. By W. 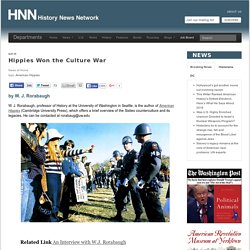 J. Rorabaugh W. J. The Hippie Counter Culture Movement (1960’s) – Mortal Journey. The 1960’s are defined by the hippie counter-culture craze that invaded the lives of every citizen in the United States and around the world. The 1960’s hippie counter culture movement involved a variety of social concerns and beliefs. The hippies’ primary tenet was that life was about being happy, not about what others thought you should be. Their “if it feels good, do it” attitudes included little forethought nor concern for the consequences of their actions.

EU referendum: Brexit letters from Glastonbury. What is the EU, why was it created and when was it formed? The Beat Generation. Like the French Impressionist artists of Paris, the Beat writers were a small group of close friends first, and a movement later. The term "Beat Generation" gradually came to represent an entire period in time, but the entire original Beat Generation in literature was small enough to have fit into a couple of cars (at times this nearly happened). WRAP THESIS Horne 1982. Mercer Kevin M 201205 BA. A “Beat” Generation: Influence and Knowledge from the Masters. Jack Kerouac once advised that one should, “blow as deep as [they] want – write as deeply, fish as far down as [they] want, satisfy [themselves] first, [and] then [their] reader cannot fail to receive telepathic shock and meaning – excitement by same laws operating in [their] own human mind […] [One should] write outwards swimming in sea of language to peripheral release and exhaustion…tap from [themselves] the song of [themselves] blow!

– now! – [their] way is your [their] way…” Kerouac was a major contributor to the Beat Generation as well as American Literature in general. He was a single piece to a puzzle otherwise known as the Beats. iWonder - Glastonbury: A helter-skelter ride from hippies to hip-hop. MY MYSTICAL WEEK: GETTING READY TO #TUNEINPEACEOUT - The Numinous. A week that’s been all about finding and using my voice, as we get ready to #tuneinpeaceout... The message, always! :: MONDAY :: OMFG finally did the Mayers Briggs personality test. OMFG mind totally blown. (And not just cos my personality “type”—Advocate—also includes MLK, Nelson Mandela, and Mother Theresa, lol.

#TuneInPeaceOut) MATERIAL GIRL, MYSTICAL WORLD: SATYA JEWELRY - The Numinous. Satya Jewelry is the ultimate high vibe jewelry line; it’s founder, Satya Scainetti, is the ultimate inspiration when it comes to working with your dharma… Satya Scainetti at home in Manhattan. Hippies and the Counterculture: Origins, Beliefs and Legacy.

Of Beatniks & Hippies. How Muddy "Glasto Effect" Contributed to Brexit. Glastonbury Music Festival Could Factor Into the Brexit Vote. Glastonbury Festival, the gigantic five-day music festival that takes place on Worthy Farm 135 miles southwest of London, is a sort of rite of summer for British teens and twenty-somethings. They make the pilgrimage to the bucolic setting every June for star-studded musical lineups—Adele and Coldplay are headlining this year—as those not lucky enough to score a ticket follow along to see just how muddy the 900-acre plot of English countryside gets. But this year, the festival’s 200,000 or so visitors are also being seen as something else: a field full of vital votes.

EU referendum: Brexit letters from Glastonbury. Young people are so bad at voting – I'm disappointed in my peers. There’s a Henry Asquith quote inscribed on a square I often walk by: “Youth would be an ideal state if it came a little later in life.” A little later in life. It’s a wonderful idea. Young people – if you're so upset by the outcome of the EU referendum, then why didn't you get out and vote? Swaths of young people in this country have been lamenting at the fact that our futures have been “ruined” by selfish older voters who probably won’t live to see the full extent of the damage they have caused. Yet, it has been estimated that only 36 per cent of people in the 18 – 24 year old category voted in the EU referendum. 64 per cent of young people did not bother to take themselves down to the polling station and cast their ballot.

Turnout in areas with a higher proportion of young residents was lower across the country. So, it is rather hypocritical for the young to chastise older Brits when less of us voted than those who did not. Ft. Premium Digital All the benefits of a standard Digital Subscription plus: Unlimited access to all content Instant Insights column for comment and analysis as news unfolds FT Confidential Research - in-depth China and Southeast Asia analysis ePaper - the digital replica of the printed newspaper Full access to LEX - our agenda setting daily commentary Exclusive emails, including a weekly email from our Editor, Lionel Barber Full access to EM Squared- news and analysis service on emerging markets Brexit Briefing - Your essential guide to the impact of the UK-EU split Standard Digital Access to FT award winning news on desktop, mobile and tablet Personalised email briefings by industry, journalist or sector Portfolio tools to help manage your investments FastFT - market-moving news and views, 24 hours a day Brexit Briefing - Your essential guide to the impact of the UK-EU split.

Utopia Quotes by Thomas More. Remembering Howard Zinn. Resist Newsletter, March/April 2010 It is not easy for me to write a few words about Howard Zinn, the great American activist and historian who passed away a few days ago. He was a very close friend for 45 years. EU Referendum: UK Set To Remain In The EU, According To On-The-Day YouGov Poll. British millennials like me are the real losers in the Brexit vote. By Lauren RazaviJune 24 Lauren Razavi is a feature writer specializing in business, technology and innovation stories. Jeremy Deller flies flag for Thomas More's Utopia, 500 years later. Birmingham City University - Sign In.

Brexit debate yields unexpected potential for positive political change. How big cities are adopting slow living. How voting 'none' in May could transform UK politics. A moment of reflection before the election: turn up and hold hands. Alexander Betts: Why Brexit happened. The Hippie Counter Culture Movement (1960’s) – Mortal Journey. Angélica Dass: The beauty of human skin in every color.

Brexit. How Primark, Justin Bieber and boring bands killed the subculture. A trend to dye for: This season eye catching swirls of colour see Hippie culture get a high-fashion makeover. 'Early-onset nostalgia,' Surge cola and the Mad Libs renaissance. How To Wear The Spring 2015 Boho Trend Without Being Culturally Appropriative. Cultural Appropriation Alert: Vanessa Hudgens Wears a Dreamcatcher in Her Hair. Gucci: Bringing Outsider Spirit to the Runway. From hipster to yuccie: The transformation of a privileged generation. How today's flower child lives, works and breaks social expectations.

Inside the world of the modern 'neo hippy' who seek bliss through transformational festials and meditation unlike the drugged up flower children of the 1960s. Hippie Modernism: The Struggle for Utopia.