Is It Normal If I Can't Have a Vaginal Orgasm? The problematic notion that vaginal orgasm is the norm for assigned women's experience of sexual pleasure can be traced back to Sigmund Freud, at least in part. 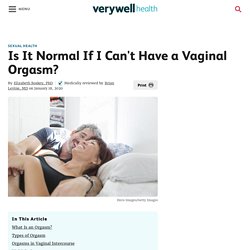 Freud believed that orgasming from vaginal stimulation alone (i.e. having a vaginal orgasm) was more mature than orgasming from clitoral stimulation. He believed this because he thought that the clitoris was a male organ, due to its structural similarity to a penis. Needing or wanting to stimulate these "male" parts for pleasure made women less feminine, and thus less mature. Today, we know that Freud's beliefs about women's sexual pleasure were based on flawed reasoning and heterosexist assumptions. Types of Orgasms and How to Achieve Them.

Is there really a vaginal orgasm? - Health & Wellbeing. By Cathy Johnson A quest to experience 'vaginal orgasms' can cause women needless anxiety, sex therapists say. 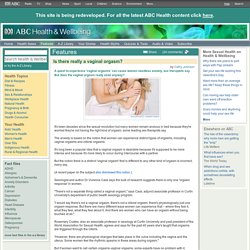 But does the vaginal orgasm really exist anyway? [Image source: iStockPhoto | IuriiKryvenko] It's been decades since the sexual revolution but many women remain anxious in bed because they're worried they're not having the right kind of orgasm, some leading sex therapists say. Mystical Cervical Orgasm– selfcervix. ...and mystical it is! 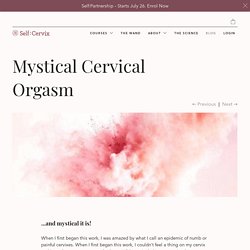 When I first began this work, I was amazed by what I call an epidemic of numb or painful cervixes. When I first began this work, I couldn't feel a thing on my cervix and I speak to many women who haven’t felt cervical pleasure - quite the opposite - they associate the cervix with the uncomfortable feeling of having a pap smear. It’s enough to put people off exploring the cervix. Why are they numb? Well, for many reasons ranging from medical trauma, penetrating too soon, shame or just a lack of awareness. Real Orgasms And Transcendent Pleasure: How Women Are Reigniting Desire.

Hanna Barczyk for NPR How can more women allow themselves to experience sexual pleasure? 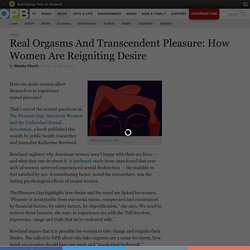 Rowland explores why American women aren’t happy with their sex lives — and what they can do about it. A landmark study from 1999 found that over 40% of women surveyed experienced sexual dysfunction — the inability to feel satisfied by sex. A contributing factor, noted the researchers, was the lasting psychological effects of sexual trauma. The Pleasure Gap highlights how desire and the mind are linked for women. Rowland argues that it is possible for women to take charge and reignite their libidos. This interview has been edited for length and clarity. Naming the Feeling of Orgasm – Good Clean Love. Mastering the Mystery of Orgasm – Week 1 What is an orgasm and what does it feel like? 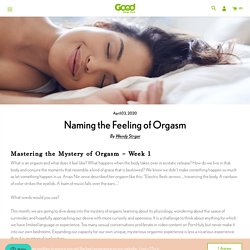 What happens when the body takes over in ecstatic release?

We need to talk about the orgasm gap — and how to fix it. Stocksy The world is supposed to be improving for women. 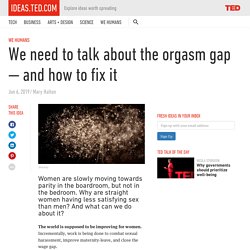 Incrementally, work is being done to combat sexual harassment, improve maternity-leave, and close the wage gap. But what about the pleasure gap? While it may sound more like innuendo than issue, the research says otherwise: when it comes to sexual pleasure, straight women are getting less of it than … well, anyone. In a 2017 survey of sexual behavior among 52,000 adults in the US, just 65 percent of heterosexual women reported that they usually or always orgasmed during sexual intimacy. This trend isn’t new. It also identified that 85 percent of men claimed their partner had an orgasm. The same study found that women were five times more likely than men to report some degree of pain during sex.

The Psychology of Stress, Orgasm, and Creativity. “The more closely we analyze what we consider ‘sexy,’” philosopher Alain de Botton argued in his meditation on sex, “the more clearly we will understand that eroticism is the feeling of excitement we experience at finding another human being who shares our values and our sense of the meaning of existence.” 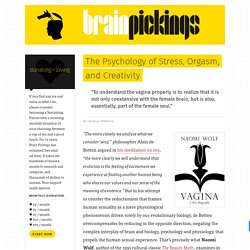 But in his attempt to counter the reductionism that frames human sexuality as a mere physiological phenomenon driven solely by our evolutionary biology, de Botton overcompensates by reducing in the opposite direction, negating the complex interplay of brain and biology, psychology and physiology, that propels the human sexual experience. That’s precisely what Naomi Wolf, author of the 1991 cultural classic The Beauty Myth, examines in Vagina: A New Biography (public library) — a fascinating exploration of the science behind the vastly misunderstood mind-body connection between brain and genitalia, consciousness and sexuality, the poetic and the scientific. 2 Full Energy Orgasm Videos. Kimberly Johnson. Mind-blowing sex-health-pert or sex-healer, as I like to call her, Kimberly Johnson is back with the insight that every woman on the planet needs to read in order to de-program. 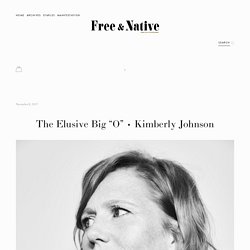 And, if you missed her last article, you must read that as well! A sweet young woman walks into my office flashing a bright, straight smile. She sits down on the table across from me, leans ways in, gasps a quick inhale, and tells me the secret she’s been storing up to tell me for months, if not years, all in one breath. Cool Study Examines the Nuanced Ways Women Orgasm. How to tell if you're having an orgasm - Because it's not always obvious. The Creative G-Spot: Unlocking Creative Power and Expression. This Is The Main Reason Humans Crave Orgasms · The Mind Unleashed. “The pleasure of living and the pleasure of the orgasm are identical.

Extreme orgasm anxiety forms the basis of the general fear of life.” ~Wilhelm Reich. The First Female Orgasm in film history, Ekstase (Machatý, 1933) with Hedy Lamarr. Orgasms Library with Real Sounds. OMGYes.com - women’s pleasure demystified. Can You Orgasm Your Way to Enlightenment? Nicole Daedone was at a Buddhist gathering when a monk made an unusual proposition: that he rub the upper left quadrant of her clitoris as part of a meditation ritual. 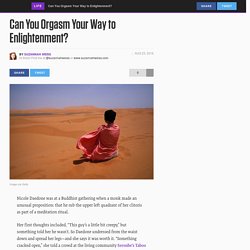 Her first thoughts included, “This guy’s a little bit creepy,” but something told her he wasn’t. So Daedone undressed from the waist down and spread her legs—and she says it was worth it. “Something cracked open,” she told a crowd at the living community Serenbe’s Taboo Weekend. “I was feeling a universal connection, but I was experiencing it through a connection to another human being.” She remembers realizing, “This is the feeling behind all the machinations of sexuality. After that, she says she was suddenly going about life with a heightened level of awareness, as if there were antennae all over her body. OneTaste holds workshops around the U.S. that teach people about orgasmic meditation. Jeff Mease, a 54-year-old restaurateur in Bloomington, Indiana, first learned about OM from a TED Talk by Daedone.