The economics of prohibition - Google Books. 1920's Prohibition. During Prohibition, the manufacture, transportation, import, export, and sale of alcoholic beverages were restricted or illegal. 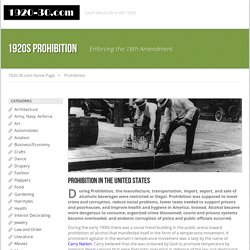 Prohibition was supposed to lower crime and corruption, reduce social problems, lower taxes needed to support prisons and poorhouses, and improve health and hygiene in America. Instead, Alcohol became more dangerous to consume; organized crime blossomed; courts and prisons systems became overloaded; and endemic corruption of police and public officials occurred. What Was the Volstead Act? The Volstead Act. Standards Correlations This lesson correlates to the National History Standards. 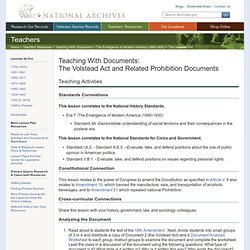 Era 7 -The Emergence of Modern America (1890-1930) Standard 3A -Demonstrate understanding of social tensions and their consequences in the postwar era. This lesson correlates to the National Standards for Civics and Government. Standard I.A.3. - Standard III.E.5. Organized Crime - American Mafia - York, Families, Mob, Family, Bosses, and Prison. Prohibition officially became law on January 17, 1920, as the states ratified (voted approval) of the Eighteenth Amendment to the U.S Constitution, banning the manufacture, sale, and distribution of alcoholic beverages in the United States. 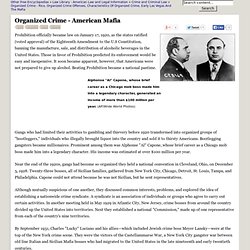 Those in favor of Prohibition predicted its enforcement would be easy and inexpensive. It soon became apparent, however, that Americans were not prepared to give up alcohol. Beating Prohibition became a national pastime. Alphonse "Al" Capone, whose brief career as a Chicago mob boss made him into a legendary character, generated an income of more than $100 million per year. Gangs who had limited their activities to gambling and thievery before 1920 transformed into organized groups of "bootleggers," individuals who illegally brought liquor into the country and sold it to thirsty Americans. Prohibition and Depression Era Gangsters and Outlaws. Prohibition. What Was Prohibition? Prohibition Era Timeline - Timeline of Prohibition Era. The Prohibition Era in the United States has a storied past beginning with various temperance movements in the 1830's and finally culminating with the passage of the 18th amendment. 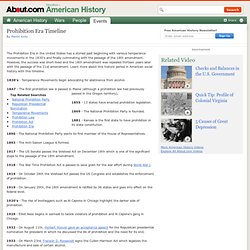 However, the success was short-lived and the 18th amendment was repealed thirteen years later with the passage of the 21st amendment. Learn more about this historic period in American social history with this timeline. 1830's - Temperance Movements begin advocating for abstinence from alcohol. 1847 - The first prohibition law is passed in Maine (although a prohibition law had previously passed in the Oregon territory). 1855 - 13 states have enacted prohibition legislation. Journalism Interview Techniques. Journalism: The key elements of an interview - by Kurt D. Moore. Kurt D. 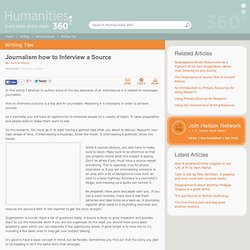 Moore's image for: "Journalism how to Interview a Source" Caption: Location: Image by: In this article I attempt to outline some of the key elements of an interview as it is related to newspaper journalism. How to interview a source is a key skill for journalists. As a journalist you will have an opportunity to interview people on a variety of topics. Journalism: The key elements of an interview - by P. Payne. Any journalism article has to begin with information gathering, with interviews being an integral part of the process. 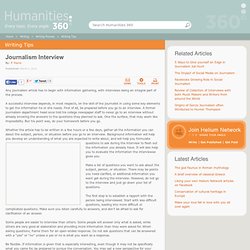 A successful interview depends, in most respects, on the skill of the journalist in using some key elements to get the information he or she needs. First of all, be prepared before you go to an interview. A former journalism department head once told his college newspaper staff to never go to an interview without already knowing the answers to the questions they planned to ask. One the surface, that may seem like impossibility. But his point was, do your homework before you go. Al Capone. Alphonse Gabriel "Al" Capone (/æl kəˈpoʊn/; January 17, 1899 – January 25, 1947) was an American gangster who led a Prohibition-era crime syndicate. 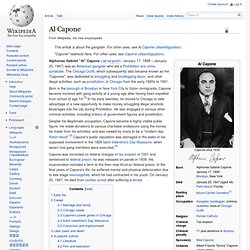 The Chicago Outfit, which subsequently also became known as the "Capones", was dedicated to smuggling and bootlegging liquor, and other illegal activities, such as prostitution, in Chicago from the early 1920s to 1931. Born in the borough of Brooklyn in New York City to Italian immigrants, Capone became involved with gang activity at a young age after having been expelled from school at age 14.[2] In his early twenties, he moved to Chicago to take advantage of a new opportunity to make money smuggling illegal alcoholic beverages into the city during Prohibition.

He also engaged in various other criminal activities, including bribery of government figures and prostitution. Despite his illegitimate occupation, Capone became a highly visible public figure. Early life Al Capone's son Albert Francis "Sonny" Capone with Al Capone's mother, Teresa. The Eighteenth Amendment and the National Prohibition Act. On December 18, 1917, the joint resolution was adopted by both houses with the required constitutional majority and was transmitted to the states for their consideration. On January 29, 1919, the Secretary of State, by proclamation, announced that on January 16th thirty-six states had ratified the amendment and therefore it had become a part of the Constitution. It was subsequently ratified by ten additional states. Al Capone. By Jennifer Rosenberg Updated October 18, 2015. 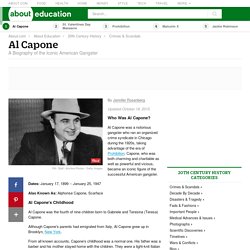 Who Was Al Capone? EFL Tasks : Crime Prevention WebQuest. Introduction One of the most controversial subjects in most communities is crime prevention--not if it's a good thing or not, most everyone wants to prevent crime, but how to go about it. 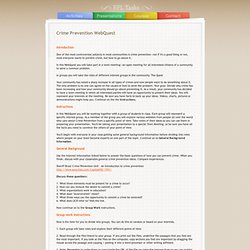 In this WebQuest you will take part in a town meeting--an open meeting for all interested citizens of a community to solve a common problem. In groups you will take the roles of different interest groups in the community. The Quest Your community has noted a sharp increase in all types of crimes and now people want to do something about it. Instructions In this WebQuest you will be working together with a group of students in class. You'll begin with everyone in your class getting some general background information before dividing into roles where people on your team become experts on one part of the topic.

General Background Use the Internet information linked below to answer the basic questions of how you can prevent crime. Sheriff Brass' Crime Prevention Unit - An introduction to crime. Advanced Place(mats): GATSBY: Webquest. In a group, you will have forty minutes to find information regarding the 1920s. 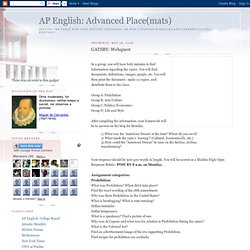 You will find documents, definitions, images, people, etc. You will then print the document - make 12 copies, and distribute them to the class. Group A: ProhibitionGroup B: Arts/CultureGroup C: Politics/EconomicsGroup D: Life and Style After compiling the information, your homework will be to answer on the blog for Monday. 1) What was the 'American Dream' at the time? Your response should be 300-500 words in length.