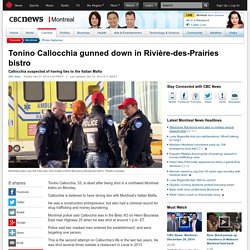 Callocchia is believed to have strong ties with Montreal’s Italian Mafia. He was a construction entrepreneur, but also had a criminal record for drug trafficking and money laundering. Montreal police said Callocchia was in the Bisto XO on Henri Bourassa East near Highway 25 when he was shot at around 1 p.m. ET. Police said two masked men entered the establishment, and were targeting one person. This is the second attempt on Callocchia’s life in the last two years. One of his associates, Roger Valiquette, was gunned down and killed later that year, also in Laval. The Rizzuto War: La Cosa Nostra. Mafia News:News. Friends of Ours: Montreal Mafia. Italian and American police have arrested dozens of suspected mobsters on both sides of the Atlantic for their alleged roles in a joint drug smuggling plot between New York's Gambino family and Italy's Ursino clan from the 'Ndrangheta or Calabrian Mafia. 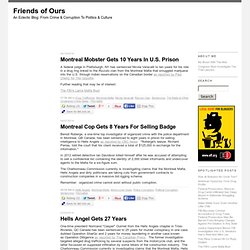 The Mexican cartels would ship cocaine loads with packed fish or fruit from Guyana ports, and "the ‘Ndrangheta guaranteed smooth import and export from Italy thanks to a corrupt port official in Gioia Tauro, Calabria" as reported by John Marzulli for the Daily News. "The 'Ndrangheta determined to move deadly narcotics across international boundaries, attempting to build a bridge of criminality and corruption to stretch from South America to Italy and back to New York," said assistant U.S. attorney Marshall Miller as reported by Philip Pullella for Reuters.

This blog long has called for the U.S. Drug trafficking always has been the mother's milk for the Italian Mafia. Further reading that may be of interest: UPDATE: Police arrests 6 men in slaying of ex-mob. Hamilton Spectator MONTREAL Police say they’ve made a major dent in Montreal’s turbulent underworld with a half-dozen arrests in the slaying of a powerful Mob boss who once led a New York City crime family. 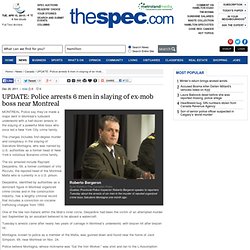 The charges includes first-degree murder and conspiracy in the slaying of Salvatore Montagna, who was named by U.S. authorities as a former head of New York’s notorious Bonanno crime family. Reputed Montreal mob boss killed. TORONTO - The Bambino Boss is dead. 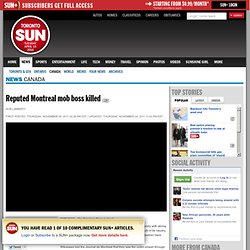 Salvatore Montagna, 40, the acting boss of the Bonanno mob family with strong southern Ontario ties, was killed by gunfire in the Montreal suburb of Ile Vaudry, near Repentigny, just before 10 a.m. Thursday. The Surete du Quebec have taken over the case. Witnesses told the Journal de Montreal that they saw the victim smash through a window and then run towards a nearby river. Arriving police pulled the victim out of the water and tried to resuscitate him, witnesses said. Montagne’s murder follows the slaying of one his supporters, Lorenzo LoPresti. LoPresti, 40, was found murdered in an apparent gangland style hit on his high-rise St. Or it could be a simple case of revenge. Rick Porrello's AmericanMafia.com - 26 Mafia Families and Their Cities. 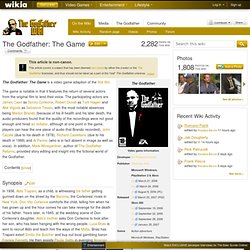 The game is notable in that it features the return of several actors from the original film to lend their voice. The participating actors are James Caan as Sonny Corleone, Robert Duvall as Tom Hagen and Abe Vigoda as Salvatore Tessio, with the most notable absences being Marlon Brando (because of his ill health and his later death, the audio producers found that the quality of the recordings were not good enough and hired an imitator, although at one point in the game, players can hear the one piece of audio that Brando recorded), John Cazale (due to his death in 1978), Richard Castellano (due to his death in 1988) and Al Pacino (who is in fact absent in image as well as voice).

The body of an alleged Mafia boss, who U.S. authorities said once headed New York's notorious Bonanno crime family, has been fished out of a river near Montreal. 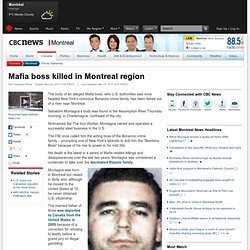 4 charged with murder of Mafia boss. - Raynald Desjardins was arrested Tuesday along with five other men. - Raynald Desjardins and three others arrested in connection with the death of Mafia boss Salvatore Montagna have been charged with first-degree murder and conspiracy. Three of the accused made an appearance in a Joliette courtroom Wednesday, one day after the arrest of six men allegedly connected to Montagna’s death.