Sparging - BrewWiki. Sparging, also called lautering is a step at the end of the mashing process where hot water is run through the grain bed to extract a sweet liquid called wort. 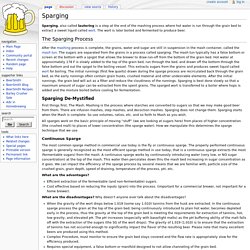 The wort is later boiled and fermented to produce beer. The Sparging Process After the mashing process is complete, the grains, water and sugar are still in suspension in the mash container, called the mash tun. The sugars are separated from the grains in a process called sparging. The mash tun typically has a false bottom or screen at the bottom with a spigot that allows the brewer to draw run-off from the bottom of the grain bed.

What is Beer Haze and How Can You Fix It? By John Moorhead, AHA Project Coordinator/National Homebrew Competition Director Your friend just poured you a fresh homebrew, and it came up cloudy. 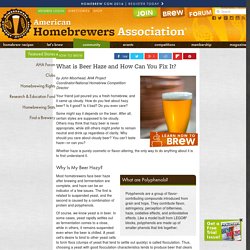 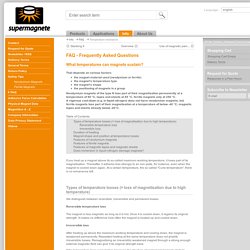 Reversible temperature loss The magnet is less magnetic as long as it is hot. Once it is cooled down, it regains its original strength. It makes no difference how often the magnet is heated up and cooled down. Irreversible loss After heating up above the maximum working temperature and cooling down, the magnet is weakened permanently. If the temperature rises even higher, however, the structure of permanent magnets starts to change. I-MANES.COM: imanes de neodimio y ferrita el iman del Biomagnetismo Médico y Par Biomagnetico - ¿Que son los gauss? Acrílicos Mesch SA. ¿Cómo almacenas la cerveza? - Aspectos de la maduración y el envejecimiento. 13 marzo, 2014. 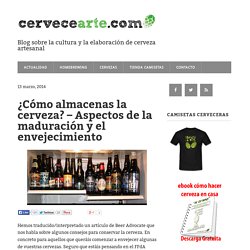 Malt and its Impact on Beer with Dr Charlie Bamforth - BeerSmith Podcast #105. Dr Charlie Bamforth, Distinguished Professor of Brewing Science from the University of California at Davis joins me this week to discuss malted barley, its alternatives and the huge impact malt has on beer. 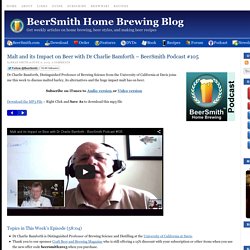 Subscribe on iTunes to Audio version or Video version Download the MP3 File – Right Click and Save As to download this mp3 file Topics in This Week’s Episode (58:04) Thanks to Dr Charlie Bamforth for appearing on the show and also to you for listening! iTunes Announcements: I launched a new video channel for the BeerSmith podcast on iTunes, so subscribe now! Thoughts on the Podcast? Leave me a comment below or visit our discussion forum to leave a comment in the podcast section there. Subscribe to the Podcast on iTunes or BeerSmith Radio. RIMS and HERMS Brewing: Advanced Homebrewing. Are you an advanced homebrewer seeking stable mash temperatures? 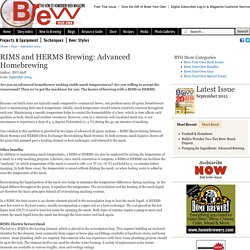 Are you willing to accept the runaround? Then we've got the machines for you. The basics of brewing with a RIMS or HERMS. Because our batch sizes are typically small compared to commercial brews, one problem many all-grain homebrewers have is maintaining their mash temperature. Ideally, mash temperature should remain relatively constant throughout each rest. Brewery Overview - 3 BBL Brewery - Enegren Brewing Co. Your own flavor standards, for a price. If you want to play along at home, you have 4 options for making your own flavor standards. 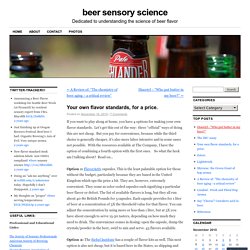 Let’s get this out of the way: three “official” ways of doing this are not cheap. But you pay for convenience, because while the third choice is generally cheaper, it’s also more labor intensive and in some cases not possible. With the resources available at The Company, I have the option of combining a fourth option with the first ones. So what the heck am I talking about? Read on… Option 1: FlavorActiv capsules. Option 2: The Siebel Institute has a couple of flavor kits as well. Option 3: Essentially, the grocery store. BJCP Flavor Kits. Logo with wings. Beer bottles stock photo 5505756. Taller-Manejo-Levaduras-Cerveceras-JAM-Cordoba-2014-1.

GoBeer #2. Home Brewing Beer Blog by BeerSmith. Porter is a English beer style that has become very popular in the United States. 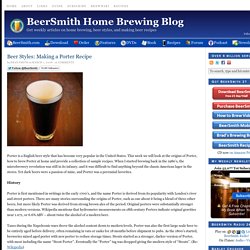 This week we will look at the origins of Porter, how to brew Porter at home and provide a collection of sample recipes. When I started brewing back in the 1980’s, the microbrewery revolution was still in its infancy, and it was difficult to find anything beyond the classic American lager in the stores. Yet dark beers were a passion of mine, and Porter was a perennial favorites. History Porter is first mentioned in writings in the early 1700’s, and the name Porter is derived from its popularity with London’s river and street porters. In another interesting side note, Porter’s popularity was so high that it was stored in huge vats in the late 1700’s, and there was an arms race of sorts between major breweries to see who could build the largest vas. Designing a Porter Recipe Designing Porter recipes can be a lot of fun as the Porter style includes room for experimentation. 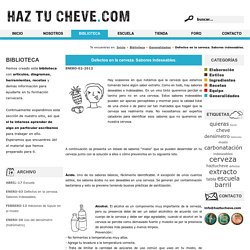 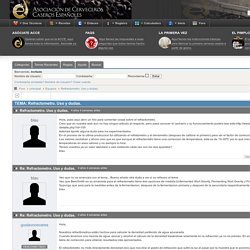 Beer sites. Has my beer stopped fermenting? This is a common question that crops up amongst new brewers waiting expectantly on their first or second batch of beer. Fortunately it’s an easy question to answer -and a good opportunity to learn what happens during fermentation as well as a bit about using hydrometers. Read on! Firstly it’s a good idea to know what to expect of a fermenting batch of beer. Most of us know that there should be some vigorous bubbling from the airlock (much to the amusement of family members), and a thick head of yeast on top of the beer. This will slow down and eventually subside after a few days, signifying that the time for bottling is soon approaching. Stock Footage - Beer Commercial. Beer Commercial Video Preview Share Facebook Google Plus Twitter Pinterest Description Generic beer commercial to promote your fresh drink.

Mundo Cerveza. Revista MASH - Ciencia Cervecera. Building a Mash Tun has Never Been So Easy - American Homebrewers Association. Unless you’re using the brew in a bag technique, a mash tun is an essential piece of equipment when advancing to all-grain brewing. Mash tuns come in all shapes, sizes and materials, and the ideal vessel for you will depend on your current procedures and future goals as a homebrewer. Mash tuns can be purchased from a homebrew shop, or easily made at home with limited skill and tools. In this tutorial, we’ll cover how to build a mash tun for batch sparge brewing (~5 gallon batches), an approachable means of all-grain brewing.