Bet You Didn't Know: Halloween. Shakespeare. About Tudor Explorers for Kids. The golden age of exploration began in the 15th century and lasted more than 200 years. 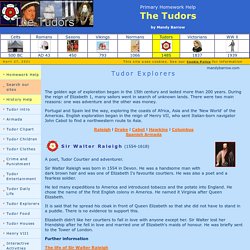 During the reign of Elizabeth 1, many sailors went in search of unknown lands. There were two main reasons: one was adventure and the other was money. Portugal and Spain led the way, exploring the coasts of Africa, Asia and the 'New World' of the Americas. English exploration began in the reign of Henry VII, who sent Italian-born navigator John Cabot to find a northwestern route to Asia. Raleigh l Drake l Cabot l Hawkins l Columbus Spanish Armada A poet, Tudor Courtier and adventurer. Sir Walter Raleigh was born in 1554 in Devon. He led many expeditions to America and introduced tobacco and the potato into England. It is said that he spread his cloak in front of Queen Elizabeth so that she did not have to stand in a puddle. Elizabeth didn't like her courtiers to fall in love with anyone except her. 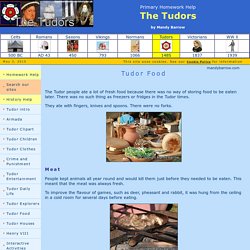 There was no such thing as freezers or fridges in the Tudor times. They ate with fingers, knives and spoons. There were no forks. People kept animals all year round and would kill them just before they needed to be eaten. This meant that the meat was always fresh. To improve the flavour of games, such as deer, pheasant and rabbit, it was hung from the ceiling in a cold room for several days before eating. Three-quarters (75%) of the rich Tudor diet was made up of meat such as oxen, deer, calves, pigs, badger or wild boar. 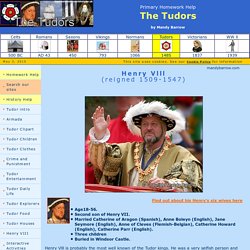 Second son of Henry VII. Married Catherine of Aragon (Spanish), Anne Boleyn (English), Jane Seymore (English), Anne of Cleves (Flemish-Belgian), Catherine Howard (English), Catherine Parr (English). Three children Buried in Windsor Castle. Henry Vlll is probably the most well known of the Tudor kings. Henry Vlll was born at Greenwich Palace, London on 28 June 1491 and was the second son of Henry Vll and Elizabeth of York (daughter of Edward lV). When did Henry become king? He succeeded to the throne after his father's death on 21 April 1509. Henry built fine palaces, and fought wars against France and Scotland. Appearance Tall and thickset, with blue-grey eyes, short auburn hair and a beard. Henry Vlll was handsome in his youth, but became bloated and fat (he had a 54-inch waist when he was 50).

He dressed lavishly, wearing a gold collar with a diamond as big as a walnut and many jewelled rings. Religion Sport / Hobbies Home Family Life. The Dissolution of the Monasteries. In the reign of Henry VIII the Pope was the head of all the Christian Church. 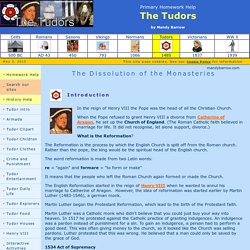 When the Pope refused to grant Henry VIII a divorce from Catherine of Aragon, he set up the Church of England. (The Roman Catholic faith believed in marriage for life. It did not recognise, let alone support, divorce.) The Poor in Tudor times. Life for the poor in Tudor times was harsh. 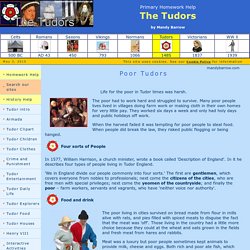 The poor had to work hard and struggled to survive. Many poor people lives lived in villages doing farm work or making cloth in their own homes for very little pay. They worked six days a week and only had holy days and public holidays off work. When the harvest failed it was tempting for poor people to steal food. When people did break the law, they risked public flogging or being hanged. Four sorts of People In 1577, William Harrison, a church minister, wrote a book called 'Description of England'. 'We in England divide our people commonly into four sorts.' Home Page. Homelife | Tudor Food Poor Tudors | Rich Tudors l Entertainment Tudor Shops In Tudor towns there were bakers, butchers, fishmongers, brewer, cooks, weavers, tailors and robe makers, washerwomen, shoemakers, building workers and carpenters, smiths and metal workers. 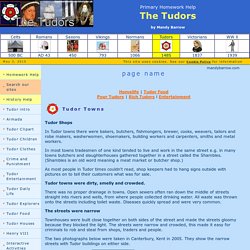 In most towns tradesmen of one kind tended to live and work in the same street e.g. in many towns butchers and slaughterhouses gathered together in a street called the Shambles. (Shambles is an old word meaning a meat market or butcher shop.) As most people in Tudor times couldn't read, shop keepers had to hang signs outside with pictures on to tell their customers what was for sale. Why did Henry VIII have six wives? Henry divorced two of his wives (Catherine of Aragon and Anne of Cleves), he had two of his wives executed (Anne Boleyn and Catherine Howard) and one of his wives (Jane Seymour) died shortly after childbirth. 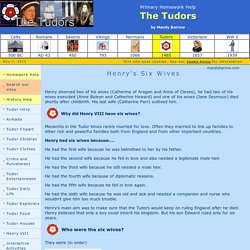 His last wife (Catherine Parr) outlived him. Why did Henry VIII have six wives? Monarchs in the Tudor times rarely married for love. Often they married to link up families to other rich and powerful families both from England and from other important countries. Henry had six wives because.... He had the first wife because he was betrothed to her by his father.

Why did Henry VIII have six wives? Battle of Bosworth - War of the Roses. The Wars of the Roses were a series of civil wars fought in medieval England from 1455 to 1487. 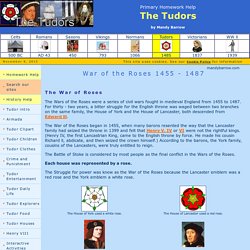 For thirty - two years, a bitter struggle for the English throne was waged between two branches on the same family, the House of York and the House of Lancaster, both descended from Edward lll. The War of the Roses began in 1455, when many barons resented the way that the Lancaster family had seized the throne in 1399 and felt that Henry V, IV or VI were not the rightful kings. (Henry IV, the first Lancastrian King, came to the English throne by force. He made his cousin Richard ll, abdicate, and then seized the crown himself.) According to the barons, the York family, cousins of the Lancasters, were truly entitled to reign. The Tudors and the Reformation.