Welcome to Forbes. The Life Expectancy of a Social Network. I could have easily titled this post “Are Facebook’s Days Numbered?” 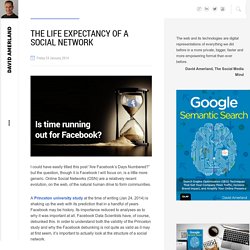 But the question, though it is Facebook I will focus on, is a little more generic. Online Social Networks (OSN) are a relatively recent evolution, on the web, of the natural human drive to form communities. 5 New Social-Media Platforms Worth a Look. When businesses launch social media campaigns, they generally focus on the major platforms. 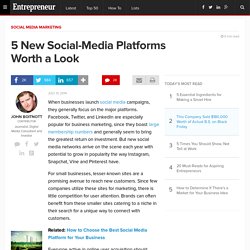 Facebook, Twitter, and LinkedIn are especially popular for business marketing, since they boast large membership numbers and generally seem to bring the greatest return on investment. But new social media networks arrive on the scene each year with potential to grow in popularity the way Instagram, Snapchat, Vine and Pinterest have. For small businesses, lesser-known sites are a promising avenue to reach new customers. Since few companies utilize these sites for marketing, there is little competition for user attention. Brands can often benefit from these smaller sites catering to a niche in their search for a unique way to connect with customers. Related: How to Choose the Best Social Media Platform for Your Business. Storehouse for iPhone. What is Social Media? - Social Media Defined.

Social Media is the future of communication, a countless array of internet based tools and platforms that increase and enhance the sharing of information. 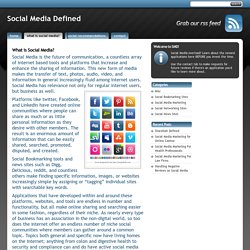 This new form of media makes the transfer of text, photos, audio, video, and information in general increasingly fluid among internet users. Social Media has relevance not only for regular internet users, but business as well. Platforms like twitter, Facebook, and Linkedin have created online communities where people can share as much or as little personal information as they desire with other members. The result is an enormous amount of information that can be easily shared, searched, promoted, disputed, and created. Social Bookmarking tools and news sites such as Digg, Delicious, reddit, and countless others make finding specific information, images, or websites increasingly simple by assigning or “tagging” individual sites with searchable key words. Relevant Articles:

Welcome to Forbes. The Dirty Business of Buying Instagram Followers - In Depth. Every blogger wants to be the next Man Repeller or Susie Bubble— but would you buy your way to get there? 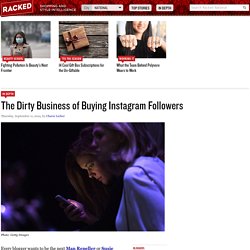 The act of paying for followers has been a relatively quiet part of the social media conversation for a few years now. Brands like Pepsi and Mercedes-Benz have been accused of inorganically beefing up their numbers, as have public figures like former presidential candidate Newt Gingrich and hip-hop mogul Sean Combs.

Recently, buying followers has become so commonplace in the blogging world that those on the inside have started calling out their comrades on the dubious practice. Missguided targets £100m sales - New Articles - The Independent. Missguided has reported a 90 per cent jump in turnover and is eyeing sales of £100m a year. 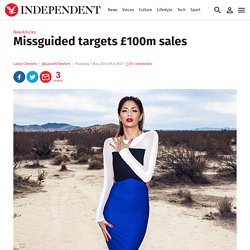 The online fashion retailer, which sells a range designed by former Pussycat Dolls singer and X Factor judge Nicole Scherzinger, said sales reached £55m for the year to March 2014. It achieved profit of £3.1m on £29m of sales in the previous year but could not reveal its current profit. The Manchester-based website, founded five years ago by Nitin Passi, said it receives 8 million visits a month.

Passi, who founded the website after working for his father’s clothing supply business, now employs 450 people. Missguided describes the business as fast fashion due to its speed in reacting to trends and styles. The group is expanding overseas and has launched a local language site in France, and operates in Australia and the US. Get The Job: MD Fashion Etail - Manchester Fashion Network. NAME: NITIN PASSIAGE: 28POSITION: Managing Director and Founder of MissguidedDEGREE: BA (Hons) Business Management (2:1) The Fashion Network: What do you personally look for in a new recruit and what skills are vital to a person looking to work in your company? 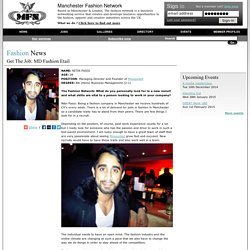 10,000 new entrepreneurs supported by Start Up Loans. Social Networking Reaches Nearly One in Four Around the World. According to a new eMarketer report, “Worldwide Social Network Users: 2013 Forecast and Comparative Estimates,” nearly one in four people worldwide will use social networks in 2013. 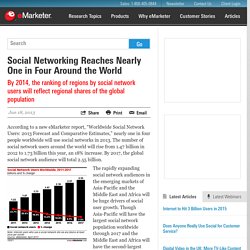 The number of social network users around the world will rise from 1.47 billion in 2012 to 1.73 billion this year, an 18% increase. By 2017, the global social network audience will total 2.55 billion. The rapidly expanding social network audiences in the emerging markets of Asia-Pacific and the Middle East and Africa will be huge drivers of social user growth. Though Asia-Pacific will have the largest social network population worldwide through 2017 and the Middle East and Africa will have the second-largest audience starting next year, their population penetration rates are among the lowest. Out of the countries included in the forecast, eMarketer expects the fastest increases to come from the social network user populations of India, Indonesia, Mexico, China and Brazil. Previous Article. How to use social media to build online communities for housing residents. As head of communities for Yarlington, I wanted to find a way to involve all residents and not to allow barriers, such as mental health, physical disability or location, to impede our communication with them. 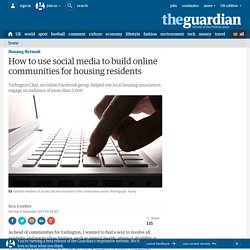 We developed a Facebook group called Yarlington Chat, with the aim of creating an online community. Like many housing associations, Yarlington had a small core group of involved residents, but the majority were from the older, retired sector. We wanted to engage younger, more diverse tenants to become part of our resident focus groups. Initially we were met with complaints and an almost hostile membership. Those who had never engaged were using the forum to vent their frustrations. The Top 7 Social Media Marketing Trends That Will Dominate 2015. The History of Social Media. Long before it became the commercialized mass information and entertainment juggernaut it is today, long before it was accessible to the general public, and certainly many years before Al Gore claimed he “took the initiative in creating” it, the Internet – and its predecessors – were a focal point for social interactivity. 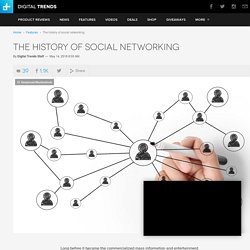 Granted, computer networking was initially envisioned in the heyday of The Beatles as a military-centric command and control scheme. But as it expanded beyond just a privileged few hubs and nodes, so too did the idea that connected computers might also make a great forum for discussing mutual topics of interest, and perhaps even meeting or renewing acquaintances with other humans. Cutting-edge Social Media Approaches to Business Education: Teaching with ... Charles Wankel is Professor of Management at St. 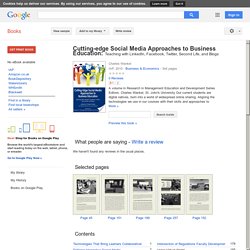 John's University, New York.He holds a doctorate from New York University, where he was admitted to the Beta Gamma Sigma national honor society for business disciplines. Columbia University's American Assembly identified him as one of the nation's top experts on Total Quality Management. He received the Outstanding Service in Management Education & Development Award at both the 2004 and 2005 meetings of the Academy of Management (AOM). AOM also presented its Best Paper in Management Education Award to him in 1991, and he has been selected to serve as an officer of AOM divisions every year for more than a decade.Along with Robert DeFillippi, he has been editing a multi-volume series for AOM on management education issues: the Research in Management Education & Development Series.

IEEE Xplore Abstract - Predicting the Future with Social Media. Six-Social-Media-Trends-for-2011. Page. 18 Digital Marketing Trends for 2014 You May Not Have Heard About. What Social Media should my business use? Do you use social media because you feel you should, rather than because you think it adds value to your business? Not every business should be active on every social network, or at least a large majority of the time you should focus your efforts on social media channels that suit you and your business. What social media should I use? First things first, what social media channels should you be using? I’m going to jump right in on this one. Without a doubt you should be on LinkedIn as should your employees. You should probably be using Twitter too. Birmingham City University - Sign In. Login to Mintel Oxygen - Mintel Group Ltd.

Videos on S.M and business

Academic journals. How to Use Social Media to Build Your Brand. Social media is one of the most powerful branding tools available for your business. It's even replaced paid advertising... Instagram Is The Fastest-Growing Social Site Globally, Mobile Devices Rule Over PCs For Access. Pinterest may have passed Twitter in popularity in the U.S. according to new figures out last month from Pew, but globally the social network to watch may be Facebook-owned Instagram. According to research published today by the GlobalWebIndex, Instagram is growing the fastest of all social media sites worldwide, increasing its active user base by 23% in the last six months.

But on an overall basis, it’s still behind the likes of Facebook, YouTube, Google+, Twitter and LinkedIn — which come respectively in at positions 1-5 of the world’s most popular social platforms in terms of penetration. And who’s active usage is falling? Facebook, YouTube, the two Russian social networks Odnoklassniki and Vkontakte… and MySpace.

Powerful Branding Techniques through Social Media. Social media is powering the world in ways many have never imagined. We can see new connections being formed out of seemingly thin air. With more profile integration than ever before, it’s important to understand how to manage your digital personality.