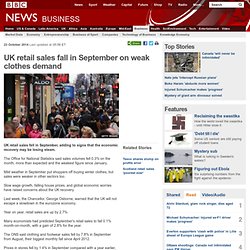 The Office for National Statistics said sales volumes fell 0.3% on the month, more than expected and the weakest figure since January. Mild weather in September put shoppers off buying winter clothes, but sales were weaker in other sectors too. Slow wage growth, falling house prices, and global economic worries have raised concerns about the UK recovery. BP and GDF Suez discover new North Sea oil field. 23 October 2014Last updated at 05:47 ET Oil firms BP and GDF Suez have announced the discovery of a new field in the UK Central North Sea. 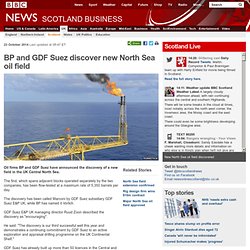 The find, which spans adjacent blocks operated separately by the two companies, has been flow-tested at a maximum rate of 5,350 barrels per day. Pension plan for regular job movers. 23 October 2014Last updated at 07:08 ET Pensions Minister Steve Webb says the rules need to reflect changing work trends Thousands of people who move jobs regularly will no longer be pushed into cashing in or moving their workplace pension, under government plans. 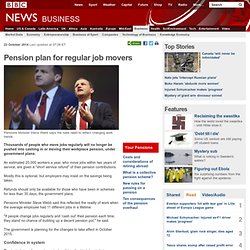 An estimated 20,000 workers a year, who move jobs within two years of service, are given a "short service refund" of their pension contributions. Mostly this is optional, but employers may insist on the savings being taken. Refunds should only be available for those who have been in schemes for less than 30 days, the government plans. Pensions Minister Steve Webb said this reflected the reality of work when the average employee had 11 different jobs in a lifetime. "If people change jobs regularly and 'cash out' their pension each time, they stand no chance of building up a decent pension pot," he said. Lorry tax windfall bigger than expected.

23 October 2014Last updated at 08:51 ET By Richard Westcott BBC Transport Correspondent A new tax on foreign heavy goods lorries (HGV) coming to the UK could rake in twice as much as the government expected, Treasury figures suggest. 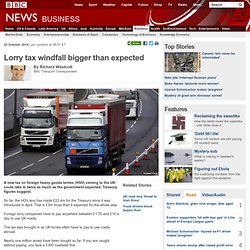 So far, the HGV levy has made £23.4m for the Treasury since it was introduced in April. That is £3m more than it expected for the whole year. Foreign lorry companies have to pay anywhere between £1.70 and £10 a day to use UK roads. The tax was brought in as UK lorries often have to pay to use roads abroad. Nearly one million levies have been bought so far. The top five countries buying the most levies are Poland, Romania, Spain, Hungary and the Czech Republic.

But don't be fooled into thinking they drive the most lorries in the UK - it just means they buy the most daily tickets. In the grand scheme of things, £23m won't buy you a lot of new roads. Follow Richard on @BBCwestcott. Ebola outbreak: Britain sending 750 soldiers and medics to Western Africa - Health News - Health & Families - The Independent. Military personnel including medics and soldiers will be sent to Sierra Leone, one of the three countries that have borne the brunt of the outbreak. 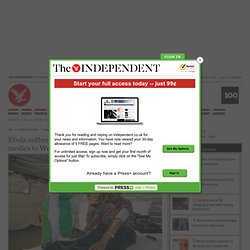 The announcement came amid a growing appreciation that the West had so far failed to grasp the scale of the crisis. The US Secretary of State, John Kerry, made an impassioned appeal for wealthy nations to do more to combat the outbreak. “We need people to step up now,” he said. “Now is the time for action, not words. And frankly, there is not a moment to waste in this effort.” Shoppers lose appetite for big supermarkets. However, Tesco's shares have never reached such heights since and last week Buffett made a rare and stark admission, saying: "I made a mistake on Tesco. 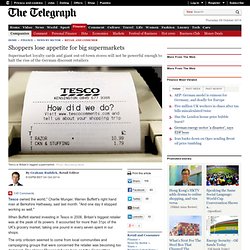 " But the "Sage of Omaha" is not the only well-known investor to be nursing wounds from the implosion of Britain's supermarkets. Qatar Holding, one of the world's biggest sovereign wealth funds, is sitting on paper losses of more than £1.5bn from its stake in Sainsbury's. So far in 2014, the food retailers are leading the FTSE 100 downwards. Tesco is down 47pc, Morrisons has lost 39pc, and Sainsbury's has fallen 38pc. The supermarket industry appears to be undergoing its own version of the banking crisis. Bryan Roberts, retail insights director at Kantar Retail, said: "Tesco doesn't just compete with Sainsbury's, Asda, Aldi and so on.

"Never before has there been such a plethora of choice, and never before have shoppers been so willing to exercise that choice. " This increase in choice has combined with a willingness to use it. Momentum slows in housing market, says Rics. 8 October 2014Last updated at 19:45 ET Prices are still expected to rise, but not at the rate seen earlier in the year Momentum in the UK housing market has faded with house price growth slowing to the same level as 16 months ago, surveyors say. 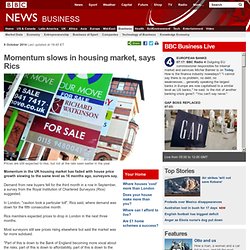 Demand from new buyers fell for the third month in a row in September, a survey from the Royal Institution of Chartered Surveyors (Rics) suggested. Dairy farmers protest over milk price cuts.