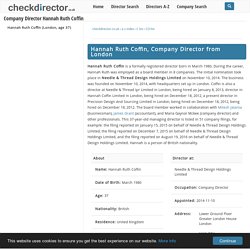 A Conversation With: Hannah Coffin of Needle & Thread - Neiman Marcus. NM Social June 24, 2016 From floral dungarees to floor-length gowns — the 2016 Needle & Thread Pre-Fall collection is nothing short of a Victorian dream. 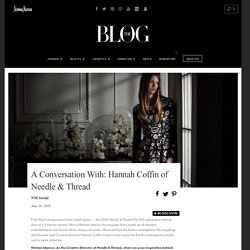 New to Neiman Marcus, this exquisite line is made up of detailed embellishments and laced collars, along with subtle influences from the Eastern hemisphere. We caught up with Founder and Creative Director Hannah Coffin to learn more about this British contemporary brand and its latest collection. Neiman Marcus: As the Creative Director of Needle & Thread, what was your inspiration behind the 2016 Pre-Fall collection? 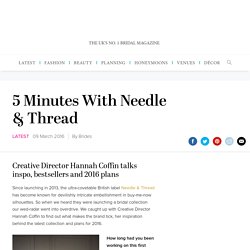 We knew our client was already choosing Needle & Thread for her special moments, such as her graduation, prom or even her best friend's wedding. How many pieces are currently available and what will this increase to in 2016? What is already proving to be hugely popular? The response to our bridal collection has been just amazing. Marigay McKee joins Needle & Thread board. Marigay McKee McKee was formerly president of Saks Fifth Avenue and chief merchant at Harrods. 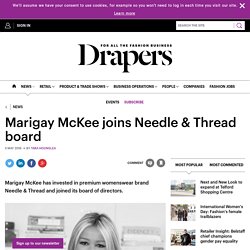 She left Saks in 2014 and set up MM Luxe Consulting. This is her first fashion investment. Needle & Thread plots US wholesale push. Speaking to Drapers following news of Marigay Mckee’s investment into the label, Coffin said the brand was targeting both independents and department stores in the US, a key market for the brand. 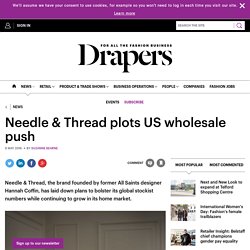 Needle & Thread appointed sales agency Goods & Services in September last year to help push the label in the States, where it already has built up a strong portfolio of 24 stockists including Nordstrom, Neiman Marcus and Revolve Clothing. The brand is also in the early stages of exploring other territories. “We’re looking at Asia,” said Coffin. “We’re just working [on which locations] at the moment.” In Asia, Needle & Thread is stocked in six Lane Crawford stores in locations such as Hong Kong, Shanghai and Chengdu, and is sold via the department store’s website.

On product, Coffin said its bridalwear range had performed well since its launch late last year. Thanks to strong growth, Coffin said the 20-strong womenswear team was looking to bring in new hires across most parts of the business. The Drapers Interview: Hannah Coffin on growing Needle & Thread into a global brand.

Evolution of Sex and Gender. TF. TF Politics. "Mobile to overtake fixed Internet access by 2014" was the huge headline summarising the bold prediction from 2008 by Mary Meeker, an analyst at Kleiner Perkins Caufield Byers who reviews technology trends annually in May. 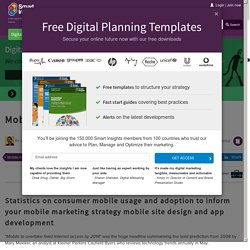 The mobile statistics that the team at Smart Insights curate in the regular updates to this article are grouped under these headings for key questions marketers need to answer about mobile to help them compete: Q1. Time spent using mobile mediaQ2. Percentage of consumers using mobile devicesQ3. How many website visits are on mobile vs desktop devices? The United States and United Kingdom are the main countries covered for which there are many reports. Well, we're now past the mobile Tipping Point shown in the chart below as this 2017 mobile usage report from comScore shows, based on percent of mobile minutes spent online.

So it's no longer a case of asking whether mobile marketing important, we know it is! Download our Free Digital Strategy Guide. Q1. Q2. Q3. Q4. Q5. Q6.