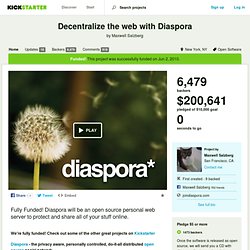 Check out some of the other great projects on Kickstarter Diaspora - the privacy aware, personally controlled, do-it-all distributed open source social network We are four talented young programmers from NYU’s Courant Institute trying to raise money so we can spend the summer building Diaspora; an open source personal web server that will put individuals in control of their data.

What is it? Enter your Diaspora “seed,” a personal web server that stores all of your information and shares it with your friends. For a little more detailed explanation, checkout this blog post. What is the project about? We believe that privacy and connectedness do not have to be mutually exclusive. Why are we building it? This February, Eben Moglen, Columbia law professor and author of the latest GPL, gave a talk on Internet privacy. But why is centralization so much more convenient, even in an age where relatively powerful computers are ubiquitous? Why do we need money? Our Promise. Blog Diaspora Foundation. Diaspora Pod uptime - Find your new social home. Diaspora (software) The project was founded by Dan Grippi, Maxwell Salzberg, Raphael Sofaer and Ilya Zhitomirskiy, students at New York University's Courant Institute of Mathematical Sciences. 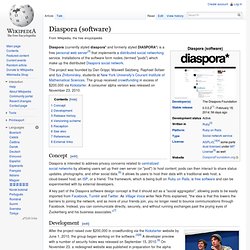 The group received crowdfunding in excess of $200,000 via Kickstarter. A consumer alpha version was released on November 23, 2010. Diaspora is intended to address privacy concerns related to centralized social networks by allowing users set up their own server (or "pod") to host content; pods can then interact to share status updates, photographs, and other social data.[6] It allows its users to host their data with a traditional web host, a cloud-based host, an ISP, or a friend. The framework, which is being built on Ruby on Rails, is free software and can be experimented with by external developers. A key part of the Diaspora software design concept is that it should act as a "social aggregator", allowing posts to be easily imported from Facebook, Tumblr and Twitter. Getting Started. News & Articles. PODS. Co-Founder Dies Nov-12-2011. Hart said Zhitomirskiy's case is still at the active investigation stage by her office and that more information will be available when the case is closed. 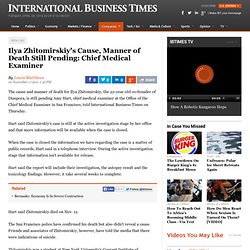 When the case is closed the information we have regarding the case is a matter of public records, Hart said in a telephone interview. During the active investigation stage that information isn't available for release. Hart said the report will include their investigation, the autopsy result and the toxicology findings. However, it take several weeks to complete. Hart said Zhitomirskiy died on Nov. 12. The San Francisco police have confirmed his death but also didn't reveal a cause. Zhitomirskiy was a student at New York University's Courant Institute of Mathematical Sciences in 2010 when he and three other undergraduates decided to create a Web-based community that would give users control over the information they shared.