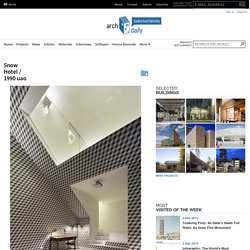 Detail It is a common sense that detailing takes its place at the later phase of process, and this is especially true for an architectural design. However, on the other hand, I think it is possible for detail to be the beginning of the process. The more so, if the process is for interior design. The detail is not limited to properly joining and finishing the materials. Floor, Wall and Ceiling Floor, wall and ceiling of the room are such common elements for architecture just like ground, column and roof. The material that were usually used on floor is now applied on wall or closet (a, b, c, f, h), some part of the wall is connected to ceiling (corridor), and floor and ceiling is reflecting each other like a mirror (e, l, lobby). 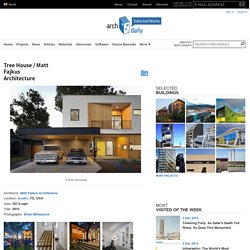 Balanced shade, dappled sunlight, and tree canopy views are the basis of the 518 Sacramento Drive house design. The entry is on center with the lot’s primary Live Oak tree, and each interior space has a unique relationship to this central element. Composed of crisply-detailed, considered materials, surfaces and finishes, the home is a balance of sophistication and restraint. 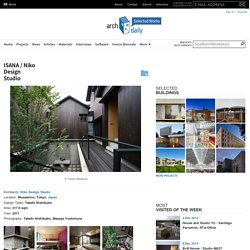 Runner's House on Architizer. Selgascano: el B auditorium in cartagena. Mar 26, 2012 selgascano: el B auditorium in cartagena ‘el ‘B” by selgascano, cartagena, spain image © iwan baan all images courtesy of selgascano recently completed, the auditorium and performing center ‘el ‘B” designed by madrid-based practice selgascano is placed along the docks of the harbor city of cartagena, spain. spanning the 1 kilometer long alfonso dock, a 20 meter void between the building and water serves as a promenade, maintaining the artificial waterfront of the port. the translucent exterior of the linear volume stretches 210 meters and projects the orthogonal edges found in the man-made environment. linear facade faces harbor along dock image © iwan baan. 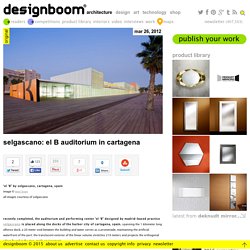 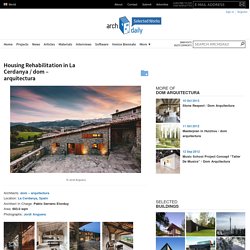 Wood warmth The project is located in a small village in La Cerdanya. Located on the north valley side and facing south, the dense rural core is formed by about 20 houses, is surrounded by fields and meadows where agriculture and farming are the main activities. Step Into the Multicolored Universe of the Pantone Hotel with these Eye-Watering Images. The Pantone Hotel, a seven-story hotel in Brussels with decor inspired by the famous Pantone color system, opened for business in 2010, but these candy-colored images of its multi-hued rooms were new to us. 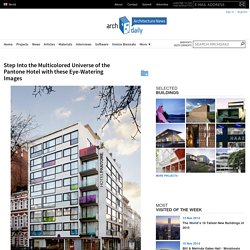 Designed by interior designer Michel Penneman and architect Olivier Hannaert, and photographed by Sven Laurent, the Pantone Hotel serves up 59 rooms in a wide variety of color schemes, perfected by Pantone’s authoritative color matching system. It is the apotheosis of the company’s transition into manufacturing lifestyle products, with the “Pantone Universe” range containing everything from mugs to cufflinks, all colored to an exact specification with their identifying code. 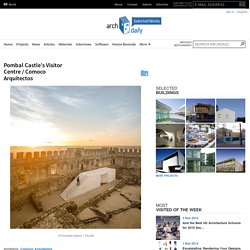 The castle of the Portuguese city of Pombal testifies to the power of time as the main contributor for the transformation of the built environment. The top of a hill overlooking the valley of the Arunca river has been occupied since the time of the Roman empire, and since then performed multiple roles and configured very many spatial and social practices. Studio Gang Reimagines Beloit Powerhouse as Campus Hub. Wisconsin’s Beloit College has commissioned Studio Gang Architects to reimagine a decommissioned coal-burning power plant as a “lively” student recreation and meeting center. 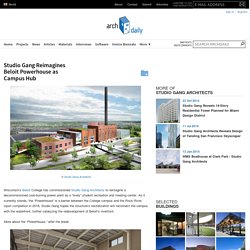 As it currently stands, the “Powerhouse” is a barrier between the College campus and the Rock River. Upon completion in 2018, Studio Gang hopes the structure’s revitalization will reconnect the campus with the waterfront, further catalyzing the redevelopment of Beloit’s riverfront. More about the “Powerhouse,” after the break. “The design retains architectural features of the original industrial structure while incorporating new sustainable practices,” described Studio Gang in a press release. 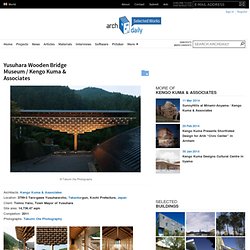 The museum technically bridges communications in this area. It functions not only as a passage between the two facilities but also as an accommodation and workshop, ideal location for artist-in-residence programs. In this project, we challenged a structural system which composes of small parts, referring to cantilever structure often employed in traditional architecture in Japan and China. It is a great example of sustainable design, as you can achieve a big cantilever even without large-sized materials. 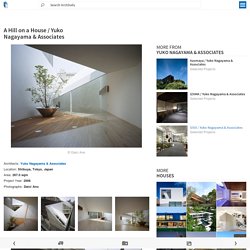 This is an urban house surrounded by tall buildings on all sides except for the northeast facing a street. The issue was how to bring light into the interior, to open the enclosed volume and to develop scenery within it while avoiding looks from the neighborhood. There rises a white illuminated “hill” in the house. Its slope tilting to the southwest receives and reflects sun light onto the interior.

In the Seoul metropolitan area there is a satellite city called Anyang, a small, in Korean context, suburban town with 700.000 inhabitants. The city had decided to invite several international architects and artists to participate the design of a new park. The project, called Anyang Public Art Park, relates to the concept of art and architecture parks in Japan, the largest of which is Echigo Tsumari Art Triennial area in Niigata. Following the Korean life rhythm and style the timetable was very tight. Seaview House / Jackson Clements Burrows Architects.

Architects: Jackson Clements Burrows Architects Design Team: Jon Clements, Graham Burrows, Tim Jackson Chris Botterill Area: 310.0 sqm Year: 2009 Photographs: Shannon McGrath This house is located in old Barwon Heads on a street which accommodates an eclectic mix of post war beach houses dominated by single storey weatherboard dwellings. Contemporary architectural houses are now weaving their way into the surrounding streets, a reflection of a shifting property market. In this case, the clients were looking to replace their deteriorating beach shack which the family had owned for many years. The house was to fulfil a modest brief for a beach retreat and subsequently it would become their permanent dwelling. The clients have spent many years of their life in Barwon Heads and they were seeking a house which would effortlessly integrate within the existing streetscape whilst adapting to the changing character of the town. Cloverdale749 / Lorcan O’Herlihy Architects. Architects: Lorcan O’Herlihy Architects Location: Los Angeles, CA, USA Architect In Charge: Lorcan O’Herlihy Area: 10500.0 ft2 Year: 2014 Photographs: Lawrence Anderson Project Team: Donnie Schmidt (PD), Alex Morassut (PM), Dana Lydon (on site CA) From the architect.

Cloverdale749 is located around the block from the historically significant Miracle Mile hub comprising the Los Angeles County Museum of Art, the A+D Architecture and Design Museum, and other noteworthy cultural destinations. Adhering to a strategy to maximize land use and capitalize on zoning, the building’s 10,500 square feet push against floor area and density limitations determined by the lot’s size and location. In essence, this project is a volume that cannot expand further. The project’s façade is a study in juxtaposing simplicity with complexity, celebrating the structure’s volume with a choreographed display of permeable layers. Hupomone Ranch on Architizer.

Koya No Sumika / mA-style Architects. Architects: mA-style Architects Location: Yaizu, Shizuoka Prefecture, Japan Architect In Charge: Atsushi Kawamoto, Mayumi Kawamoto Area: 778 sqm Year: 2013 Photographs: Kai Nakamura From the architect. This is an extension plan for a young couple’s house next to the main house. The main house is a one story Japanese style house with about 200m2, which is commonly seen in rural areas. It is a big house with many rooms and mainly consists of large spaces for people to gather and to provide hospitality. However, the young couple desired feelings of ease and spaces that ensure quiet and comfortable times.