Blind Chance Chapter 1: Attack!, a mass effect fanfic. April 27, 2169 - The Citadel Presidium It was a bad Saturday for Sigren Shepard. 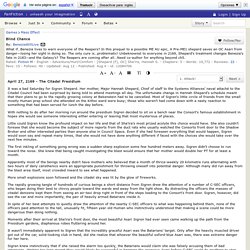 Her mother, Major Hannah Shepard, Chief of staff to the Systems Alliances' naval attaché to the Citadel Council had been surprised by being told to attend meetings all day. The unfortunate change in Hannah Shepard's schedule meant that their plans to go to the rapidly growing colony at Bekenstein had to be cancelled. Most of Sigren's little circle of friends from the small mostly Human prep school she attended on the Kithoi ward were busy; those who weren't had come down with a nasty reaction to something that had been served for lunch the day before. With nothing to do after her morning run around the presidium Sigren decided to sit on a bench near the Consort's famous establishment in hopes she would see someone interesting either entering or leaving that most mysterious of places.

Little could Sigren know the profound impact on her life and that of Sha'ira's most prized acolyte this choice would have. A Rather Unexpected Meeting, a mass effect fanfic. Disclaimer: I don't own Mass Effect This is my first attempt at fanfiction, I've been meaning to do something like this for a while, but I've never really proper inspiration to write a story like this until now and I will try update this as long as that inspiration lasts. 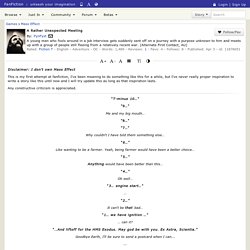 Any constructive criticism is appreciated. "T-minus 10…" Me and my big mouth… Guides for the Young Chapter 1: The Great Discovery, a mass effect fanfic. Title: Guides for the YoungAuthor: NHunterGenre: General, AdventureRating: TWarnings: AU; Possible violence and strong language; Crazy author... 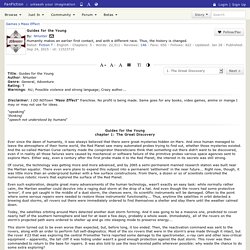 Disclaimer: I DO NOTown "Mass Effect" franchise. No profit is being made. Same goes for any books, video games, anime or manga I may or may not use for ideas. "speaking"'thinking'"speech not understood by humans" Guides for the Youngchapter 1: The Great Discovery Ever since the dawn of humanity, it was always believed that there were great mysteries hidden on Mars. Of course, the technology was getting more and more advanced, and by 2065 a semi-permanent manned research station was built near the Martian equator. Even such exploration, despite great many advancements of the human technology, wasn't exactly an easy task: while normally rather calm, the Martian weather could devolve into a raging dust storm at the drop of a hat. Today, the satellites orbiting around Mars detected another dust storm forming. "Whoa!

" "What is it, Alex? " "Be serious. " Lights and Shadows Chapter 1: Willpower, a mass effect fanfic. A/N: Over at tumblr, I reblogged a list of 49 prompts that I thought would be really fun to write. 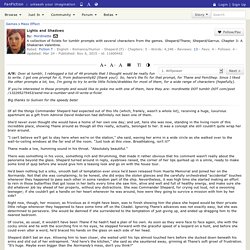 I got one prompt for it, from jediserenity82 (thank you!). So, here's the fic for that prompt, for Thane and FemShep. Since I liked the other prompts a lot, too, I'm going to try to write little ficlets/drabbles for most of them, for a wide range of characters (hopefully). If you're interested in those prompts and would like to poke me with one of them, here they are: mordinette DOT tumblr DOT com/post/132295275453/send-me-a-number-and-ill-write-a-ficlet. Be My Valentine, a mass effect fanfic. A/N: I wrote this as a gift for TinderWulf over at AO3, but I thought that maybe a few readers would enjoy reading a femShep/Sparatus story here as well. 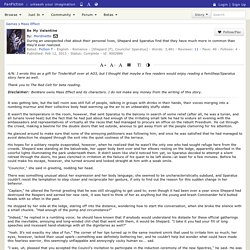 Thank you to The Red Celt for beta reading. Disclaimer: BioWare owns Mass Effect and its characters. I do not make any money from the writing of this story. It was getting late, but the ball room was still full of people, talking in groups with drinks in their hands, their voices merging into a numbing murmur and their collective body heat warming up the air to an unbearably stuffy state. It wasn't the temperature in the room, however, that sent Sparatus to the balcony in search of some relief (after all, he was a turian, and all turians loved heat) but the fact that he had just about had enough of the irritating small talk he had to endure all evening with the ambassadors and representatives of virtually all the races that had managed to procure an office on the rebuilt Presidium.

"Councilor," she said in greeting, nodding her head. Anything for You Chapter 1: Sun, a mass effect fanfic. A/N: This is a fill for a prompt on the ME k-meme that asked for small, loving gestures between Shepard and Garrus in their domestic life. 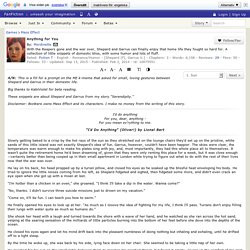 Big thanks to KabiViolet for beta reading. These snippets are about Shepard and Garrus from my story "Serendipity. " Kiss, a mass effect fanfic. A/N: I wrote this short one-shot for a prompt by jediserenity82 at tumblr, and I thought I'd share it here, too. 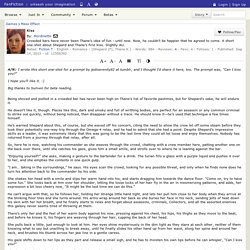 The prompt was, "Can I kiss you? " I hope you'll like it. :) Big thanks to Suilven for beta reading. Being shoved and jostled in a crowded bar has never been high on Thane's list of favorite pastimes, but for Shepard's sake, he will endure it. He doesn't like it, though. He's warned Shepard about this, of course, but she waved off his concern, citing the need to allow the crew let off some steam before they took their potentially one-way trip through the Omega-4 relay, and he had to admit that she had a point. So, here he is now, watching his commander as she weaves through the crowd, chatting with a crew member here, patting another one on the back over there, until she catches his gaze, gives him a small smile, and strolls over to where he is leaning against the bar.

"Enjoying yourself? " "I am… taking in the surroundings," he says. Resilience, a mass effect fanfic. A/N: I wrote this for a "What If" ask on Tumblr for jediserenity82. 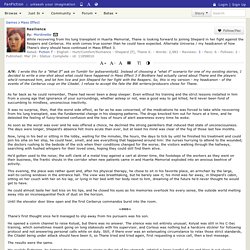 Instead of choosing a "what if" scenario for one of my existing stories, I decided to write a one-shot about what could have happened in Mass Effect 3 if BioWare had actually cared about Thane and the players who'd romanced him, and let him live and join Shepard for her fight with the Reapers. So, this is my version - my headcanon - of the events of the Cerberus coup on the Citadel. I refuse to accept the fate the BW writers/producers chose for Thane.

Mass Effect 3: What Could Have Happened? Chapter 1: Prologue: Earth, a mass effect fanfic. Part One Prologue: Earth (Opening Sequence) (Screen Fades In) (Young man stands before a screen depicting Earth) (Marines run all over the place, working at their stations) Anderson: How bad is it? 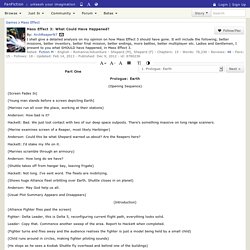 Serendipity Chapter 1: Back to Life, a mass effect fanfic. A/N: This was a fill for a prompt on the ME kink meme. 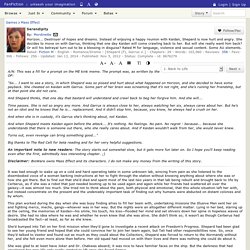 The prompt was, as written by the OP: "So... I want to see a story, in which Shepard was so pissed and hurt about what happened on Horizon, and she decided to have some payback. She cheated on Kaidan with Garrus. The Only Right Choice Chapter 1: I-01: Patience, a mass effect fanfic. Summary: Shepard was a total noob during the first play through. She made terrible choices, skipped quests, and she didn't buy any DLCs. Hopefully she would do a better job saving the galaxy at new game plus. Book I - Chapter 1: Patience The apparition of the dead boy scowled at the wounded Spectre in irritation. "You don't have a choice.

Commander Jane Shepard took in a ragged breath, staring the self-proclaimed Catalyst wearily. The AI pressed again. Shepard hung her head in despair. "Re-play. Shepard snapped her head up. The ancient AI explained, "I can add your energy to the Crucible's. "Yes! The ghostly figure of a boy grew taller, and morphed into the shape of her beloved Liara. Shepard grinned even as pain wracked her body when she sped up and took a running leap at the brilliant blue column of light. Mass Effect 3: Return of the Nuke, a mass effect fanfic. Disclaimer: Blah blah blah, don't own Mass Effect. A/N: Was playing ME3 for research purposes for the other stories. Watched the Reapers invade Earth again. Found it utterly hilarious they called it "armor" because Shepard one handed the chestplate from the N7 set. STG Investigative Report : The Odd Couple, a mass effect fanfic. STG Report on the Odd Couple : Senior Agent Vinaris to the STG Master As requested, I've put together an initial briefing document covering everything we currently know regarding the Odd Couple.

The name is somewhat obscure, appearantly sourcing from some human pre-spaceflight audiovideo entertainment show the Illusive Man was fond of. (The Illusive Man has a penchant for naming things after both human mythology and popular culture, appearantly – something the Systems Alliance has also shown an affectation for. Baffling.) As with all reports, by necessity, this document is not all inclusive with details, but instead provides high-order information that can be queried in depth at a later time.

Synthesized Chapter 1, a mass effect fanfic. Author's Note: This story has an extremely simple premise. The premise is: what if the Alliance didn't realize eezo was naturally occurring until after they were already capable of synthesizing it? Timeline 2016: SpaceX launches 7 crew to the ISS with the Dragon v2 capsule. Both the capsule and launch vehicle are completely re-usable. 2017: General Fusion perfects Magnetized Target Fusion for electricity generation. Arms Race Chapter 1, a mass effect fanfic.

Author's Note: This story is being primarily written to both get rid of a few plot bunnies bouncing around in my head, and cure a case of selective writer's block I can't seem to get rid of. The premise is simple, this humanity is having a major internal cold war, leading to a truly absurd arms buildup. Their military-industrial complexes are similarly filled with power-gaming min-maxing antimatter-loving sociopaths. The final nail in the coffin is that this humanity is roughly 200 years "ahead of schedule". Also, I don't own mass effect (DISCLAIMER DISCLAIMER). human derived power blocs - Offspring of Stars (A society of post-scarcity gene-modded cybernetic transhumanists and their AI friends.

Just Another Job, a mass effect fanfic. The sun was hot. Foreign Affairs, a mass effect fanfic. Just an idea, what exactly did Shepard get up to in the time between his fame-inducing exploits and his position on the Normandy? And what is it about him that makes asari swoon in his presence? Note: I am still not sure which Shep would ship…but this is a possible reason. Skyllian Blitz Chapter 1: Vacation, a mass effect fanfic. Akuze, a mass effect fanfic. Greetings, V-rcingetorix here. I just wanted to say hello, and tell you that classes went well. Well, as good as organic chemistry and anatomy can…. Anyway, this is something I was able to finish writing, as per requested.

This chapter is OPTIONAL, designed to be used instead of the Blitz chapter for an Origins. I should warn you that it is a bit darker than my previous writings, to be more in keeping of the "Sole Survivor Origins" idea in Mass Effect. Akuze is a member of an elite group: the terrifyingly rare "garden worlds" list. Akuze, is in the twenty-five percent of barely habitable worlds. Shepard had visited all types of planets, but he hated Akuze the most, at least to date. Limbo Chapter 1: All Lost Things, a mass effect fanfic. Endurance, a mass effect fanfic.