When the Tides Come In In which the sky is falling, an one piece fanfic. AN: This is set after canon, and half the time I'm just making up stuff on the spot. 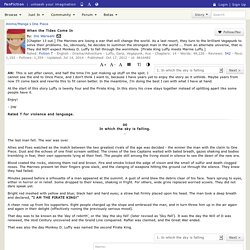 I cannot see the end to Once Piece, and I don't think I want to, because I have years yet to enjoy the story as it unfolds. Maybe years from now I'll come back and rewrite this to fit canon better. In the meantime, I'm doing the best I can with what I have at hand. At the start of this story Luffy is twenty four and the Pirate King. In this story his crew stays together instead of splitting apart like some people have it. Enjoy! Rated T for violence and language. 00In which the sky is falling.. The last man fell. Allies and Foes watched as the match between the two greatest rivals of the age was decided - the winner the man with the claim to One Piece. Blood coated the rocks, staining them red and brown. Minutes passed before a silhouette of a man appeared at the summit. Bright red meshed with yellow and blue; black hair and hard eyes; a straw hat firmly placed upon his head. Dwellers of the Holly Trees, a harry potter fanfic. Dwellers of the Holly Trees "So, my aunt? 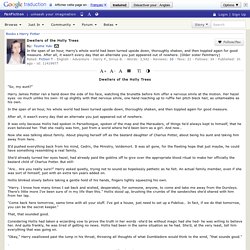 " Harry James Potter ran a hand down the side of his face, watching the brunette before him offer a nervous smile at the motion. Her hazel eyes -so much unlike his own- lit up slightly with that nervous smile, one hand reaching up to ruffle her pitch black hair, as untameable as his own. In the span of an hour, his whole world had been turned upside down, thoroughly shaken, and then toppled again for good measure. After all, it wasn't every day that an alternate you just appeared out of nowhere. It was only because Hollis had spoken in Parseltongue, spoken of the map and the Marauders, of things he'd always kept to himself, that he even believed her.

Now she was talking about family. It'd pushed everything back from his mind, Cedric, the Ministry, Voldemort. She'd already turned her eyes hazel, had already paid the goblins off to give over the appropriate blood ritual to make her officially the bastard child of Charlus Potter. Harry Potter and the Distaff Side Chapter 1, a harry potter fanfic. A/N: I own none of this. 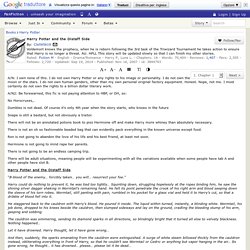 I do not own Harry Potter or any rights to his image or personality. I do not own the moon or the stars. I do not own human genders, other than my own personal original factory equipment. Honest. Nope, not me. A/N2: Be forewarned, this fic is not paying attention to HBP, or DH, so: No Horocruxes,. Dumbles is not dead. Snape is still a bastard, but not obviously a traitor. There will not be an annotated potions book to piss Hermione off and make Harry more whiney than absolutely necessary. There is not an oh so fashionable beaded bag that can evidently pack everything in the known universe except food. Ron is not going to abandon the love of his life and his best friend, at least not soon. Hermione is not going to mind rape her parents. There is not going to be an endless camping trip. There will be adult situations, meaning people will be experimenting with all the variations available when some people have tab A and other people have slot B. 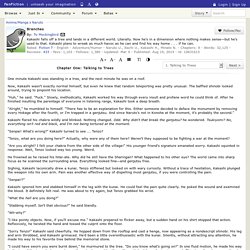 Now, Kakashi wasn't exactly normal himself, but even he knew that random teleporting was pretty unusual. The baffled shinobi looked around, trying to pinpoint his location. "Huh," he said. "Fuck. " "Alright," he mumbled to himself. Kakashi flared his chakra wildly and blinked. "Senpai! "Tenzo, what are you doing here? " "Are you alright? He frowned as he raised his hitai-ate. Sighing, Kakashi laconically drew a kunai. "Senpai!? " Kakashi ignored him and stabbed himself in the leg with the kunai. "What the hell are you doing? " "Stabbing myself. "Wh-why? " "I like pointy objects. "Sorry Tenzo! " "I could have sworn you were burnt down," he murmured to the tree.

Kakashi's first word upon waking up was a ridiculously undramatic "Ouch. " Twigs Chapter 1: The List, a naruto fanfic. The List Parallel to Chapter One: Talking to Trees Confused? 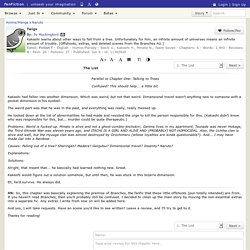 This should help... a little bit. Kakashi had fallen into another dimension. Which was weird, but not that weird. The weird part was that he was in the past, and everything was really, really messed up. He looked down at the list of abnormalities he had made and resisted the urge to kill the person responsible for this. Problems: World is fucked-up.

Causes: Falling out of a tree? Explanations: Solutions: Alright, that meant that... he basically had learned nothing new.