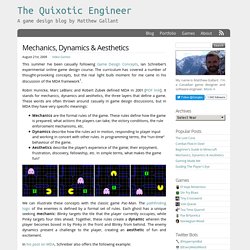 The curriculum has covered a number of thought-provoking concepts, but the real light bulb moment for me came in his discussion of the MDA framework1. Robin Hunicke, Marc LeBlanc and Robert Zubek defined MDA in 2001 [PDF link]. It stands for mechanics, dynamics and aesthetics, the three layers that define a game. These words are often thrown around casually in game design discussions, but in MDA they have very specific meanings: Mechanics are the formal rules of the game. We can illustrate these concepts with the classic game Pac-Man. In his post on MDA, Schreiber also offers the following example: In a First-Person Shooter video game, a common mechanic is for players to have “spawn points” – dedicated places on the map where they re-appear after getting killed. 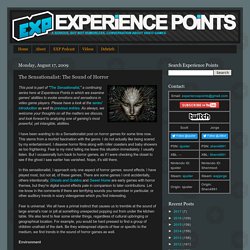 Please have a look at the series' introduction as well its previous entries. As always, we welcome your thoughts on all the matters we discuss, and look forward to analyzing one of gaming's most powerful, yet intangible, abilities. I have been wanting to do a Sensationalist post on horror games for some time now. This stems from a morbid fascination with the genre. I do not actually like being scared by my entertainment. In this sensationalist, I approach only one aspect of horror games: sound effects. Fear is universal. Bloxorz,Free Online Strategy Game,Play Computer Puzzle Maze Games,Bloxorz Kids Flash Game,Children's PC Fun. Play this Online Strategy Game - Bloxorz: This is a quality strategy / puzzle game which provides hours of fun passing the 33 stages. 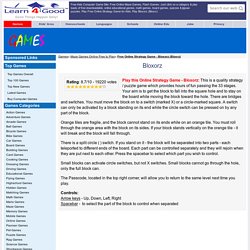 Your aim is to get the block to fall into the square hole and to stay on the board while moving the block toward the hole. There are bridges and switches. You must move the block on to a switch (marked X) or a circle-marked square. A switch can only be activated by a block standing on its end while the circle switch can be pressed on by any part of the block. Orange tiles are fragile, and the block cannot stand on its ends while on an orange tile. There is a split circle ( ) switch. Small blocks can activate circle switches, but not X switches. The Passcode, located in the top right corner, will allow you to return to the same level next time you play.

Controls: Arrow keys - Up, Down, Left, Right Spacebar - to select the part of the block to control when separated. Understanding Pac-Man Ghost Behavior. Posted on December 2, 2010 It only seems right for me to begin this blog with the topic that inspired me to start it in the first place. 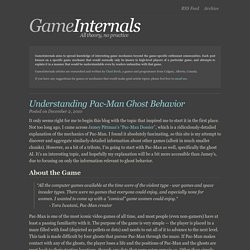 Not too long ago, I came across Jamey Pittman’s “Pac-Man Dossier”, which is a ridiculously-detailed explanation of the mechanics of Pac-Man. I found it absolutely fascinating, so this site is my attempt to discover and aggregate similarly-detailed information about other games (albeit in much smaller chunks). However, as a bit of a tribute, I’m going to start with Pac-Man as well, specifically the ghost AI. Code.tutsplus. Game Design Tools for Collaboration. Game Design Tools for Collaboration By Damien Djaouti Can a tool for modeling game design make it easier for designers to work with engineers? 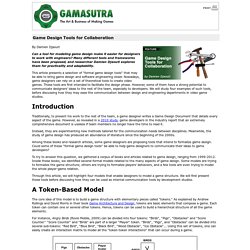 Many different tools and frameworks have been proposed, and researcher Damien Djaouti explores them for practicality and adaptability. Finite-State Machines: Theory and Implementation. A finite-state machine is a model used to represent and control execution flow. 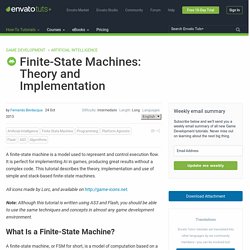 It is perfect for implementing AI in games, producing great results without a complex code. This tutorial describes the theory, implementation and use of simple and stack-based finite-state machines. All icons made by Lorc, and available on Note: Although this tutorial is written using AS3 and Flash, you should be able to use the same techniques and concepts in almost any game development environment. A finite-state machine, or FSM for short, is a model of computation based on a hypothetical machine made of one or more states. FSMs are commonly used to organize and represent an execution flow, which is useful to implement AI in games. An FSM can be represented by a graph, where the nodes are the states and the edges are the transitions.

The implementation of a FSM begins with the states and transitions it will have. An FSM can be implemented and encapsulated in a single class, named FSM for instance.