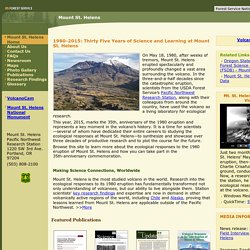 Helens erupted spectacularly and profoundly changed a vast area surrounding the volcano. In the three-and-a-half decades since the catastrophic eruption, scientists from the USDA Forest Service’s Pacific Northwest Research Station, along with their colleagues from around the country, have used the volcano as a living laboratory for ecological research. This year, 2015, marks the 35th, anniversary of the 1980 eruption and represents a key moment in the volcano’s history. It is a time for scientists—several of whom have dedicated their entire careers to studying the ecological responses at Mount St. Helens—to synthesize and showcase over three decades of productive research and to plot the course for the future.

Browse this site to learn more about the ecological responses to the 1980 eruption of Mount St. Making Science Connections, Worldwide Mount St. 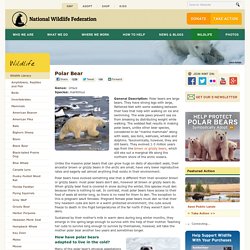 They have strong legs with large, flattened feet with some webbing between their toes that help with walking on ice and swimming. The wide paws prevent sea ice from breaking by distributing weight while walking. The webbed feet results in making polar bears, unlike other bear species, considered to be “marine mammals” along with seals, sea lions, walruses, whales and dolphins. Polar Bear. Basic Facts About Polar Bears. Polar bears are the largest land carnivores in the world, rivaled only by the Kodiak brown bears of southwestern Alaska. 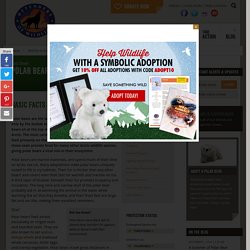 Polar bears sit at the top of the food chain in the biologically rich Arctic. The most carnivorous of the bear species, polar bears feed primarily on the fat of ice-dependent seals. The remains of these seals provide food for many other Arctic wildlife species, giving polar bears a vital role in their ecosystem. Polar bears are marine mammals, and spend much of their time on Arctic sea ice. Many adaptations make polar bears uniquely suited to life in icy habitats.

Did You Know? Polar bears have black skin to absorb heat, but their fur appears white to blend in with their environment. Diet Polar bears feed almost exclusively on ringed seals and bearded seals. Population The World Conservation Union (IUCN) estimates that there are between 20,000-25,000 polar bears in the world. Range & Habitat. Polar Bear Fact Village. Tiny Eskimo village becomes 'polar bear capital of United States' As Trump struggles to get his Mexican border wall off the ground, another group of immigrants are making themselves at home at the opposite end of the country, in America’s 49th state – with no one to stop them. 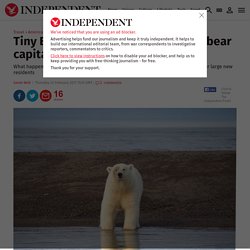 Thirty years ago, polar bears were rarely spotted on Alaska’s Arctic coast. But in recent years, they have been coming ashore in such high numbers that a whole new tourism industry has exploded around the phenomenon. As a result, the tiny Iñupiat Eskimo village of Kaktovik on Barter Island – just off Alaska’s frigid north coast – is fast becoming the polar bear capital of the United States. The overwhelming evidence points towards climate change as the key driver behind polar bears now seeking solace on mainland Alaska, due to the Arctic icepack retreating further and further each summer.

Ryan Wilson, a marine biologist with the US Fish and Wildlife Service’s polar bear programme, tells me that a reduction in sea ice affects the bears’ access to prey. Travel essentials. Name & Evolution - Polar Bears International. From brown bear to Arctic wonder Estimates of when polar bears started splitting from brown bears continue to change as geneticists learn more about the polar bear's genome. 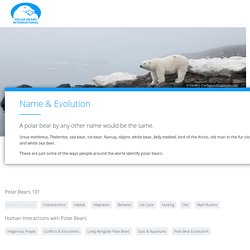 Recent findings suggest that polar bears evolved from a common ancestor of the brown bear between 350,000-6 million years ago. After beginning to branch off, the polar bear's ancestors went through a series of evolutionary changes in order to survive in the Arctic. How have they adapted? As time went on and the bears moved North, they became superbly adapted to a life of hunting seals and surviving extreme cold. From top to bottom, their bodies are perfectly coordinated with the seasonal shifts in the Arctic. Polar Bears International. Polar bears Sample.