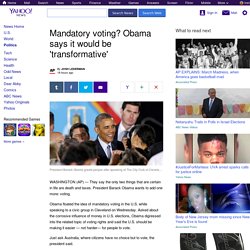 President Barack Obama wants to add one more: voting. Obama floated the idea of mandatory voting in the U.S. while speaking to a civic group in Cleveland on Wednesday. Asked about the corrosive influence of money in U.S. elections, Obama digressed into the related topic of voting rights and said the U.S. should be making it easier — not harder— for people to vote. Just ask Australia, where citizens have no choice but to vote, the president said. "If everybody voted, then it would completely change the political map in this country," Obama said, calling it potentially transformative.

Disproportionately, Americans who skip the polls on Election Day are younger, lower-income and more likely to be immigrants or minorities, Obama said. Statistically speaking, Obama is correct. Critical Condition. Jump to: OVERVIEW This lesson plan is designed to be used with the film Critical Condition, which tells the stories of four uninsured Americans as they battle illness over a two-year period. 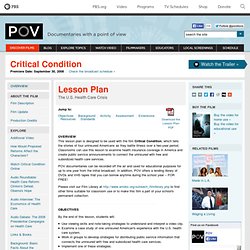 Classrooms can use this lesson to examine health insurance coverage in America and create public service announcements to connect the uninsured with free and subsidized health care services. POV documentaries can be recorded off the air and used for educational purposes for up to one year from the initial broadcast. In addition, POV offers a lending library of DVDs and VHS tapes that you can borrow anytime during the school year -- FOR FREE! Please visit our Film Library at to find other films suitable for classroom use or to make this film a part of your school's permanent collection. Lesson Plans: Teaching Six Big Ideas in the Constitution. Constitution of the United States. 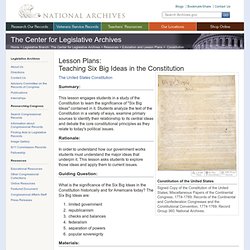 Obama Has Support For Syria Strikes, But Are They Legal? : Parallels. President Obama addresses the 69th session of the U.N. 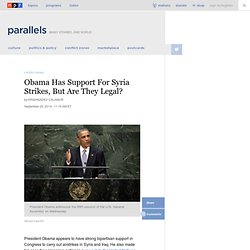 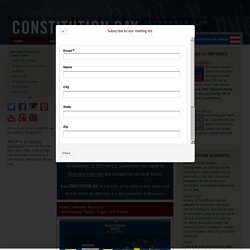 Congress Fiercely Divided Over Completely Blank Bill That Says And Does Nothing. WASHINGTON—A blank piece of legislation that says nothing, does nothing, and contains no text whatsoever has been the source of heated debate in Washington this week, and has sharply divided Congress along partisan lines, Beltway sources confirmed Thursday. 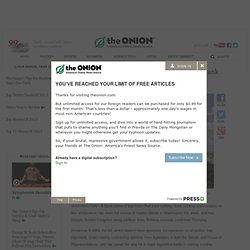 Known as S.0000, the bill, which doesn’t have sponsors, co-sponsors, or an author, has reportedly drawn starkly contrasting opinions from legislators in both the Senate and House of Representatives, and has paved the way for a major legislative battle in coming months. The search for civic virtues: The unkindness of strangers. Only lawyers now can argue before Supreme Court. WASHINGTON (AP) — You must be a lawyer to argue before the Supreme Court. 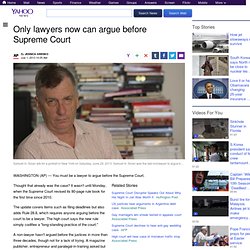 Thought that already was the case? It wasn't until Monday, when the Supreme Court revised its 80-page rule book for the first time since 2010. The update covers items such as filing deadlines but also adds Rule 28.8, which requires anyone arguing before the court to be a lawyer. Secretary Of Interior Takes Presidential Oath Of Office. WASHINGTON—Secretary of the Interior Sally Jewell was sworn in today as the 45th president of the United States, reciting the oath of office in a brief ceremony at the White House and expressing her continued disbelief that the president, vice president, House speaker, president pro tempore of the Senate, Secretary of State, Secretary of the Treasury, Secretary of Defense, and attorney general were all in that hot-air balloon together. 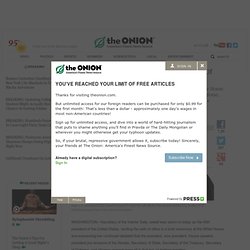 Speaking to citizens in a short inaugural address, Jewell, a 57-year-old Seattle businesswoman who was confirmed as Interior Secretary less than three weeks ago, acknowledged the challenges ahead for the nation and noted how “really quite strange” it was that Barack Obama, Joe Biden, John Boehner, Patrick Leahy, John Kerry, Jacob Lew, Chuck Hagel, and Eric Holder mutually agreed to take the day off and rent a hot-air balloon for the afternoon. “I mean, how many hot-air balloon crashes are there a year?” She continued. Socialist Constitution of the Democratic People's Republic of Korea (Full Text) 1998. DPRK's Socialist Constitution (Full Text) Amended and supplemented socialist constitution of the DPRK, adopted on Sept. 5, 1998 by the first session of the 1th Supreme People's Assembly. 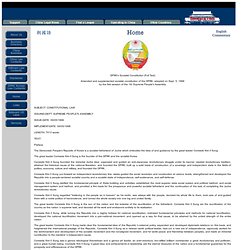 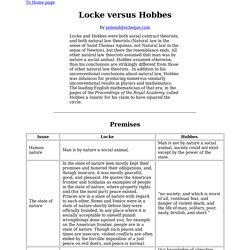