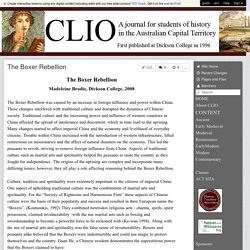 These changes interfered with traditional culture and disrupted the dynamics of Chinese society. Traditional culture and the increasing power and influence of western countries in China affected the spread of intolerance and discontent, which in time lead to the uprising. Many changes started to affect imperial China and the economy and livelihood of everyday citizens. Chapter 7: What Color Was Joan of Arc's Hair?: Developing Critical Literacy through Historical Thinking Skills on JSTOR. Skip to Main Content If you need an accessible version of this item please contact JSTOR User Support Chapter 7: What Color Was Joan of Arc's Hair? 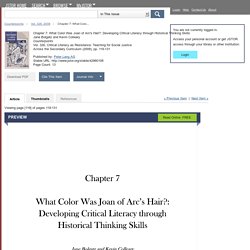 : Developing Critical Literacy through Historical Thinking Skills Jane Bolgatz and Kevin Colleary Counterpoints Vol. 326, Critical Literacy as Resistance: Teaching for Social Justice Across the Secondary Curriculum (2008), pp. 119-131. Chapter 7: What Color Was Joan of Arc's Hair?: Developing Critical Literacy through Historical Thinking Skills on JSTOR. Internet History Sourcebooks. HERE we are at the gates, the double triple gates, deep as tunnels, and formed of the most powerful masonry---gates surmounted by deadly dungeons, each one five stories high, with strange curved roofs---extravagant dungeons, colossal black things above a black inclosing wall. 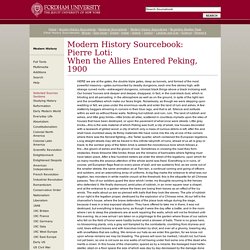 Our horses' hooves sink deeper and deeper, disappear, in fact, in the coal-black dust, which is blinding and all-pervading, in the atmosphere as well as on the ground, in spite of the light rain and the snowflakes which make our faces tingle. Noiselessly, as though we were stepping upon wadding or felt, we pass under the enormous vaults and enter the land of ruin and ashes. A few slatternly beggars shivering in corners in their blue rags, and that is all. Silence and solitude within as well as without these walls. Internet History Sourcebooks. WHEN the letters of the various ministers had been committed to my care, I returned to Su Wang Fu, saying to myself, "How shall I ever be able to take these letters to Tientsin? 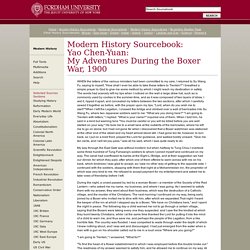 " I breathed a simple prayer to God to give me some method by which I might reach my destination in safety. Death blow to corrupt doctrines : a plain statement of facts published by the gentry and people : YA Pamphlet Collection (Library of Congress) DLC. Internet History Sourcebooks. Fei Ch'i-hao was a Chinese Christian. 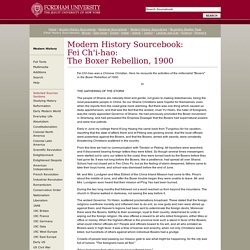 Here he recounts the activities of the millenialist "Boxers" in the Boxer Rebellion of 1900. 02 Clark 2008. CHAPTER XI  THE ATTEMPT OF MATTEO RICCI TO LINK. When introduced into another country or nation a foreign culture is confronted by the problem of how to treat that cultural tradition. 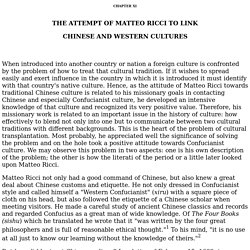 If it wishes to spread easily and exert influence in the country in which it is introduced it must identify with that country's native culture. Hence, as the attitude of Matteo Ricci towards traditional Chinese culture is related to his missionary goals in contacting Chinese and especially Confucianist culture, he developed an intensive knowledge of that culture and recognized its very positive value. Therefore, his missionary work is related to an important issue in the history of culture: how effectively to blend not only into one but to communicate between two cultural traditions with different backgrounds. 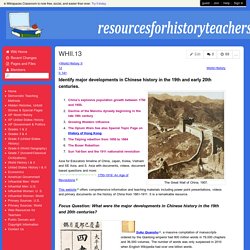 Asia with documents, videos, document based questions and more: 1750-1919: An Age of RevolutionsThis website offers comprehensive information and teaching materials including power point presentations, videos and primary documents on the history of China from 1861-1911. It is a remarkable resource. Go to WHI.23 for background on Chinese history before 1800. 1. Boxer Rebellion Letter Witness Analysis. Name ________________________ Class ________________________ Examine the document(s) and any teacher hints included in this activity. 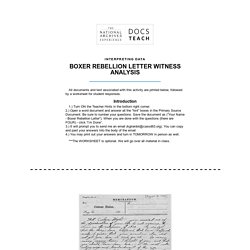 Think about how each document and hint relates to the larger questions being asked. If instructed, use the space below each image to comment on the document. Bxr1. A Chinese Account of the Boxer Rebellion [Excerpted from George Lynch, The War of the Civilizations, Being the Record of a "Foreign Devil's" Experiences with the Allies in China. 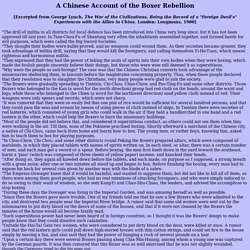 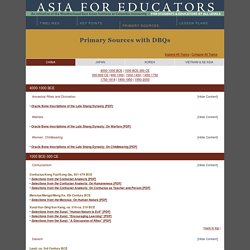 In 1792 Great Britain sent a diplomat, Lord George Macartney (1737-1806), to present its demands to the Qianlong emperor (r. 1736-1796). This unit includes an introductory note to teachers with suggestions for teaching about Macartney's mission; a student reading discussing European contact and trade with China prior to and on the eve of Macartney's mission to China; and the primary-source reading Two Edicts from the Qianlong Emperor, which were the Qianlong emperor's responses to the Macartney mission. The Missionary Enterprise in China. Internet History Sourcebooks. Women in World History: PRIMARY SOURCES. This article was published in a Protestant missionary journal, based in Canton, that operated from 1832 until 1851. Its readership included both the foreigners living in Canton and home religious communities in Britain and the United States. It is worthwhile noting that the title of the article places the author in the position of knowledgeable observer, thereby rendering his comments both “factual” and honest.

The author maintains a sympathetic attitude towards Chinese women, citing their beauty and charm, yet paints them as victims of insensitive males and an oppressive culture, presuming an invisible sorrow shared by all women in China. American Experience . America 1900 . The Film &amp; More. US officials thought that American missionaries were very important for American interests, not just for missionary interest, but overall American interest in China. And the reason was that, for example, once American missionaries were able to get into interior provinces of China, it opened these provinces up to American business people, and consequently American diplomatic officials on the scene nicely call the American missionaries the pioneers for American trade and business, because once they opened up an area, then the other Americans could come along behind and sell goods.

The American missionaries did something else. They essentially exemplified an American lifestyle. They used American products. They were people who believed that American products were the best products. The Opium War - Lost in Compensation l HISTORY OF CHINA. Opium Wars. Boxer Rebellion. 3 Minute History. Cnn millennium 9 5 china the opium wars in the 19th century 1800s. Using Graphic Novels in Education: Boxers & Saints. Welcome to Using Graphic Novels in Education, an ongoing feature from CBLDF that is designed to allay confusion around the content of banned books and to help parents and teachers raise readers.

In this column, we examine books that have been targeted by censors and provide teaching and discussion suggestions for the use of such books in classrooms. “What is China but a people and their stories” – Gene Yang, Boxers p. 312 This month, we take a closer look at Boxers & Saints by Gene Luen Yang (First Second Books, 2013). Boxers & Saints (First Second Books, 2013) was recently placed on the short list for the 2013 National Book Award for Young Peoples Literature — the second time a graphic novel has been nominated. Peking Opera Mask Lesson Plan. Peking Opera Mask Lesson Plan 1. Lesson Overview A Lesson for Prospect Open Room, Students Ages 7 to 10, Grades 3 & 4 Designed by Loren Fawcett, Education Assistant, Allen Memorial Art Museum Theme/Subject Peking opera (also known as Beijing Opera) has a history of over 200 years.