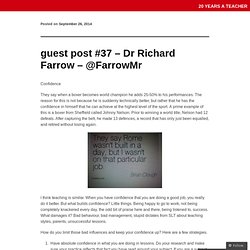 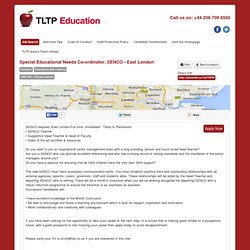 Just Trying To Be Better Than Yesterday. Advice for young teachers « Alex Wood.Education Consultant and Genealogist. Wood.education Coming Soon. Challenge, Support and All That Jazz.: That Ofsted Meeting. The Power of the Positive Phone Call Home. Four British institutions ranked in top five of world's universities.

Cambridge University was ranked second-equal with Imperial, behind only the Massachusetts Institute of Technology. 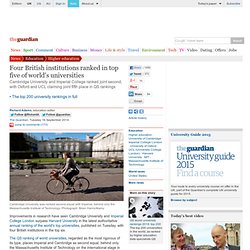 Photograph: Brian Harris/Alamy Improvements in research have seen Cambridge University and Imperial College London surpass Harvard University in the latest authoritative annual ranking of the world's top universities, published on Tuesday, with four British institutions in the top six. The QS ranking of world universities, regarded as the most rigorous of its type, places Imperial and Cambridge as second equal, behind only the Massachusetts Institute of Technology on the international stage in 2014, thanks to a year of impressive citations measured by QS's survey of academic output. Harvard dropped from second to fourth overall. It was followed by Oxford and University College London in joint fifth place, with Stanford, Caltech, Princeton and Yale of the US filling out the rest of the top 10. Updated Sept 2014: School Governors and the CEIAG Statutory Duty.

I’ve posted previously about the guidance School Governors received from the DfE on their role in implementing the CEIAG Statutory Duty. 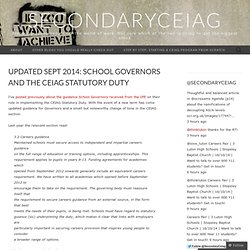 With the event of a new term has come updated guidance for Governors and a small but noteworthy change of tone in the CEIAG section. Last year the relevant section read: 3.2 Careers guidance Maintained schools must secure access to independent and impartial careers guidance on the full range of education or training options, including apprenticeships. A SENCO's new best friend. Cost of kitting out kids for school hits £240 per child – totalling £2.5bn. Parents will fork out an average of £240 to kit out each of their children with essentials such as clothes, books, stationery and other key items to equip them for the new school term in September – adding up to a staggering £2.5bn across the UK – research has claimed. 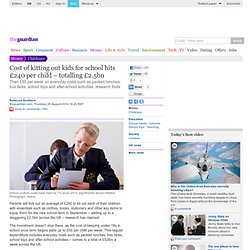 The investment doesn’t stop there, as the cost of keeping under-18s in school once term begins adds up to £50 per child per week. This regular expenditure includes everyday costs such as packed lunches, bus fares, school trips and after-school activities – comes to a total of £526m a week across the UK. The research, by Santander Credit Cards, is published as parents across the country face the costly task of preparing their youngsters for the new school year. Advice for a new secondary school teacher. A year ago, I wrote a post called “How to Teach”. 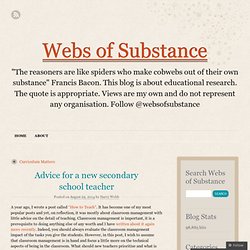 It has become one of my most popular posts and yet, on reflection, it was mostly about classroom management with little advice on the detail of teaching. Classroom management is important, it is a prerequisite to doing anything else of any worth and I have written about it again more recently. Indeed, you should always evaluate the classroom management impact of the tasks you give the students. MixBit. Witter / ? Gove urges teachers to call off strike. Kids whose time is less structured are better able to meet their own goals. Children who spend more time in less structured activities—from playing outside to reading books to visiting the zoo—are better able to set their own goals and take actions to meet those goals without prodding from adults, according to a new study by the University of Colorado Boulder. 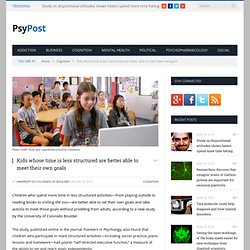 The study, published online in the journal Frontiers in Psychology, also found that children who participate in more structured activities—including soccer practice, piano lessons and homework—had poorer “self-directed executive function,” a measure of the ability to set and reach goals independently. “Executive function is extremely important for children,” said CU-Boulder psychology and neuroscience Professor Yuko Munakata, senior author of the new study. Police fear rise in domestic violence during World Cup. Police are issuing personal warnings to men and women with a record of domestic violence in the runup to England's first World Cup game, acting on evidence that abuse against wives, girlfriends and partners spikes dramatically in the aftermath of matches – whether the team wins or loses. 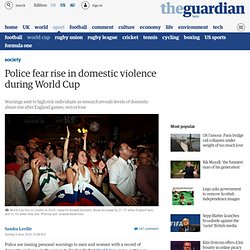 The most detailed research into the links between the football World Cup and domestic abuse rates has revealed that in one force area in England and Wales, violent incidents increased by 38% when England lost – but also rose by 26% when they won. The research, by Lancaster University criminologist Dr Stuart Kirby, a former police officer, monitored police reports of domestic violence during the last three World Cups in 2002, 2006 and 2010. Separate national research examining the 2010 World Cup echoed the Kirby findings – with domestic abuse reports up 27.7% when the England team won a game, and 31.5% when they lost. The research is being used by some police forces to try to prevent attacks. Football transfer rumours: QPR to sign Rio Ferdinand and Frank Lampard?

As the hangovers fade, as the perma-grins slip away from their faces, as the astonished joy gives way to depressing, cold logic, QPR fans must be very quietly panicking. 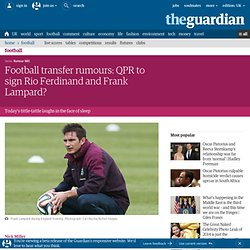 Does Ofsted have selective judgement? What the data says about selective schools and Ofsted A few weeks ago, Ian Widdows replied to my Swarm blogpost asking if the Swarm could highlight Secondary Modern schools as a group, and Grammar Schools as a group. 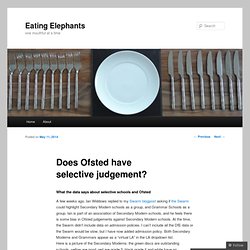 Ian is part of an association of Secondary Modern schools, and he feels there is some bias in Ofsted judgements against Secondary Modern schools. At the time, the Swarm didn’t include data on admission policies. Calling teachers Sir and Miss 'depressing and sexist' 14 May 2014Last updated at 01:20 ET Calling teachers "Sir" or "Miss" is depressing, sexist and gives women in schools a lower status than their male counterparts, an academic has said. Prof Jennifer Coates told the Times Educational Supplement "Sir is a knight... but Miss is ridiculous - it doesn't match Sir at all". Introducing @SENBlogger. #SENBlogger. On Monday evening I was involved in a Twitter conversation with several SEN educators. We were discussing how to ensure that pupils on very low P Levels understand their learning objectives.

There was a fair number of us involved in the dialogue until it almost became impossible to tweet. It occurred to me that I had read a blog post on this topic a while ago. What have I learned from writing about Ofsted? Seven reflections. The Greenwich Free School Ofsted inspection happened in February. Step one: Bez promises 'true revolution' as he launches bid for parliament. An evidence based teaching profession shouldn’t deal in absolutes. Really interesting blog article by James Richardson on the EEF website – where he makes a number of excellent points about evidence in education.

An evidence based teaching profession shouldn’t deal in absolutes. Knowing what makes a good Chair of Governors matters; with thanks to Mary Myatt. North Koreans complain to London hairdresser about Kim Jong-un poster. Seeking an arresting image to promote a special offer, a hairdressers in west London attracted more than just extra customers when it used a large poster of the North Korean leader, Kim Jong-un, in its window. New curriculum is all about results. It’s not long until September when the new primary curriculum is launched. Primary school places allocated as pupil numbers rise. 16 April 2014Last updated at 11:26 ET By Hannah Richardson BBC News education reporter.