Congress' Plan to Exterminate Every Last Tea Partier. I love the Tea Party members of Congress. 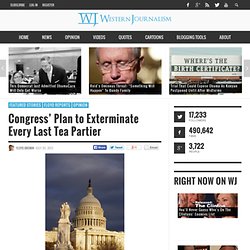 They’re courageous, principled, and, at times, innovative in their use of legislative rules to make major statements about policy. It’s too bad they face a wily foe who poses as their friend. You see, the GOP leadership in Congress is committed to Tea Party failure, especially concerning Obamacare. Obama's Ties To The Muslim Brotherhood. We hear the phrase bandied about that our government has been “infiltrated by the Muslim Brotherhood.” 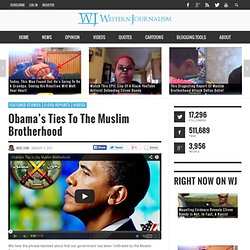 That those who have openly called for the destruction of the United States are embedded in our government. It sounds like something out of a spy novel. But they say truth is stranger than fiction. Huma Abedin, Secretary of State Hillary Clinton’s Deputy Chief of Staff, privy to top secret information, has deep ties to the Muslim Brotherhood. 100 Reasons Obama Could Be Impeached. On the heels of questions as to whether President Obama could be indicted on war crimes, some are wondering if he might also be impeached for his massive failures as President. 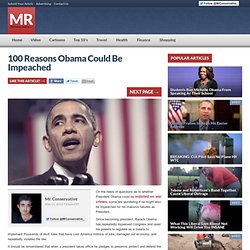 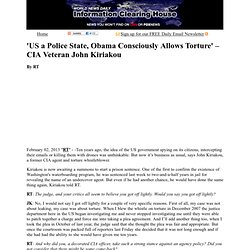 But now it’s business as usual, says John Kiriakou, a former CIA agent and torture whistleblower. Kiriakou is now awaiting a summons to start a prison sentence. Here Are All The Children Murdered By Drone Strikes At The Hands Of Obama. Visualizing the illegal drone bombardmentSteve WatsonPrisonplanet.com Jan 24, 2013 The president likes children right? 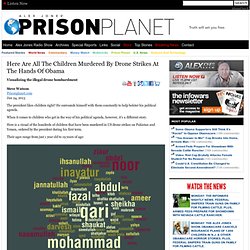 Obama Armed Libyan Rebels That Murdered U.S. Troops. Barack Obama’s answer to the public clamoring for information about the attack on the Benghazi consulate and CIA safe house was the so-called “Benghazi Accountability Report,” released on December 17. 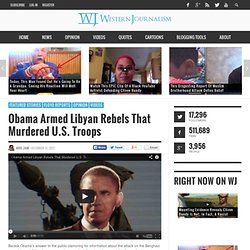 This “accountability” report didn’t actually find anyone accountable. The one person supposedly at fault for lax security at the consulate, Assistant Secretary of State Eric Boswell, who supposedly resigned, didn’t actually resign. He was just given a different desk. Barack Obama, as was expected, simply rearranged the deck chairs on the Titanic. The Accountability Report doesn’t actually address the whole business about the Obama administration blaming an anti-Muslim YouTube video for two weeks, or why Obama failed to send anyone to help the Americans under attack except a seven-man CIA team eight hours after the attack began which, as expected, was too little, too late.

The Obama Strategy of straddle, jump, and ride like hell. Obama’s “strategy” is akin to a circus rider astride two horses – one with currency manipulator George Soros, whom he has further enriched with the Gulf oil spill fiasco evicting rigs to Brazil offshore along with a billion taxpayer dollars to drill in Soros-controlled leases. 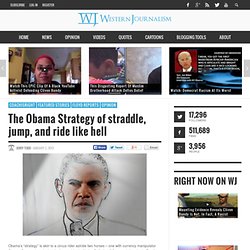 (Note: only Republican people of wealth are the evil rich. 16 tons of gold Soros is just an international patriot the French would like to get their claws in.) The other horse is obviously his love of Sharia Law. The Threat A "Living Constitution" Poses to America. How can we have rule of law when judges can amend our founding document at their whim? 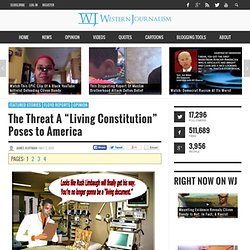 Retired Marine Brandon Raub Arrested For Facebook Posts Criticizing The Government. Intelligence insider: Obama administration agenda to “kill U.S Dollar” Netanyahu: 'This Is a Bad Deal. A very unusual statement from the Israel prime minister on the eve of a possible nuclear detail between the U.S. and Iran: 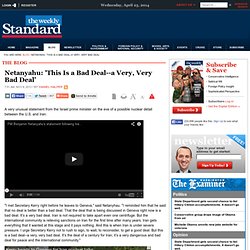 One Hundred Articles of Impeachment against Obama  By PETER PATON Resolved, That Barak Hussein Obama, President of the United States, is impeached for high crimes and misdemeanors and that the following articles of impeachment be exhibited to the United States Senate: There is a growing groundswell within American Republican and Tea Party ranks that impeachment proceedings should be initiated against President Obama on a whole list of violations of the Constitution and the War Powers Act Congressmen Allen West of Florida (R-Florida) and Darrell Issa (R- California) have consistently and loudly criticized the president for overstepping the political mark and bypassing Congress’s approval on a whole range of dubious policies and issues:and the recent Obama attack on the Supreme Court of Justice and the Russian ” Open Mic ” gaffe on National Security, leads to one question: Is Barack Obama making his own case for impeachment? 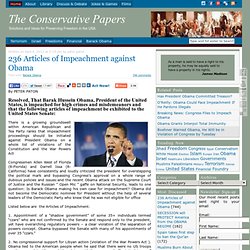 Listed below are the Articles of Impeachment. 1. 2. 3. 4. 5. 6. 7. 8. 9. 10. 11. 12. 15. Top generals: Obama is ‘purging the military’ Text smaller Text bigger WASHINGTON – Retired Army Maj. Gen. Patrick Brady, recipient of the U.S. military’s highest decoration, the Medal of Honor, as well as other top retired officers, say President Obama’s agenda is decimating the morale of the U.S. ranks to the point members no longer feel prepared to fight or have the desire to win. “There is no doubt he (Obama) is intent on emasculating the military and will fire anyone who disagrees with him” over such issues as “homosexuals, women in foxholes, the Obama sequester,” Brady told WND.

“They are purging everyone, and if you want to keep your job, just keep your mouth shut,” one source told WND. Not only are military service members being demoralized and the ranks’ overall readiness being reduced by the Obama administration’s purge of key leaders, colonels – those lined up in rank to replace outgoing generals – are quietly taking their careers in other directions. Retired Army Lt. In one case, U.S. Army Major Gen. Army Major Gen. Obama wants Marines to wear ‘girly’ hats. A change to the Marine Corps’ uniform hats could take the hard-nosed Leathernecks from the Halls of Montezuma to the shops of Christopher Street. Thanks to a plan by President Obama to create a “unisex” look for the Corps, officials are on the verge of swapping out the Marines’ iconic caps – known as “covers” — with a new version that some have derided as so “girly” that they would make the French blush.

“We don’t even have enough funding to buy bullets, and the DoD is pushing to spend $8 million on covers that look like women’s hats!” One senior Marine source fumed to The Post. DEAR LEADER IS DESTROYING OUR MILITARY ONE DAY AT A TIME! Nothing gets me hotter under the collar than Barack Hussein Obama sticking his nose in our military with his demands for changes! He does this using different factions to achieve his agenda…and he’s been successful so far. Despicable to say the very least, no matter how you look at it. The enemy within is winning folks…and something must be done to stop them! There will be one main story below…but folks, there will be other links highlighted afterwards that are must reads as well. Obama administration, Congress quietly let school security funds lapse.

Beneath the expressions of grief, sorrow and disbelief over the Connecticut school massacre lies an uneasy truth in Washington: over the last few years the Obama administration and Congress quietly let federal funding for several key school security programs lapse in the name of budget savings. Government officials told the Washington Guardian on Friday night that two Justice Department programs that had provided more than $200 million to schools for training, security equipment and police resources over the last decade weren't renewed in 2011 and 2012, and that a separate program that provided $800 million to put police officers inside the schools was ended a few years earlier. Meanwhile, the administration eliminated funding in 2011-12 for a separate Education Department program that gave money to schools to prepare for mass tragedies, the officials said.

“President Obama has made a unique and meaningful contribution to strengthening the state of Israel and the security of its people,” it said in a statement. Media Blackout ? Obama's Supreme Court Hearing Decision Tuesday 2/19/13.