Chocolate Raspberry Ice Cream Pie at DuckDuckGo. Fastest Cheesecake Recipes. This cheesecake can be topped with any flavor of canned pie filling for a finishing touch; or try fresh raspberries. 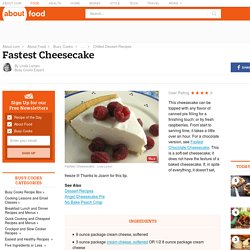 From start to serving time, it takes a little over an hour. For a chocolate version, see Fastest Chocolate Cheesecake. This is a soft-set cheesecake; it does not have the texture of a baked cheesecake. If, in spite of everything, it doesn't set, freeze it! Sweetened Condensed Milk Custard. Ingredients Given the request of a great friend, that living in England, follows this recipe typically Brazilian. 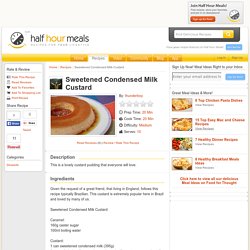 This custard is extremely popular here in Brazil and loved by many of us. Easy Pavlova Recipe. Detail. Lemon Chewy Crisps Recipe. Current-obsession-the-raw-chocolate-mousse-made-114071056980. Orange And Ricotta Crackle Cookies. I have been drowning in food for the past five weeks. 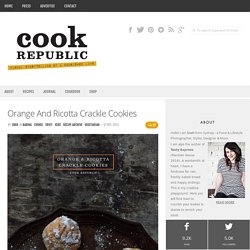 I am almost in the home stretch of writing a cookbook as far as recipe development, testing, writing and shooting is concerned. Chocolate Chip Cookies Recipe - Classic Baking Recipes. When she has the kitchen all to herself, Phyllis Grant of Dash and Bella cooks beautiful iterations of what solo meals were always meant to be: exactly what you want, when and where you want them. 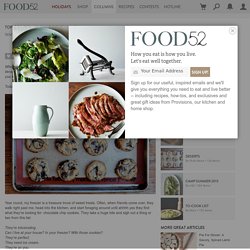 The Food Lab: The Science of the Best Chocolate Chip Cookies. [Photographs: J. 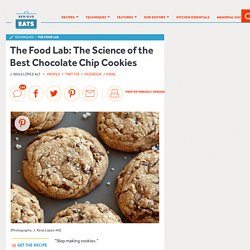 Kenji Lopez-Alt] "Stop making cookies. " I'm sorry, what was that dear? "I said, stop making cookies. " That's odd, I thought to myself. Then, as I glanced around the apartment, wiping chocolate-specked hands against my apron, running a finger across the countertop and tracing a line into the dusting of white powder that coated every surface in the kitchen, eyeing the dozens of bags of failed experimental cookies that blocked the television, opening the refrigerator door to discover that more than half of its contents were batches of uncooked cookie dough in various stages of rest, I thought, maybe she does have a point.

Ranger Cookies Recipe. Swedish Chocolate Cake Recipe. Izy Hossack is the 18-year-old author of the new cookbook Top With Cinnamon (Hardie Grant), which is based on her popular blog of the same name. 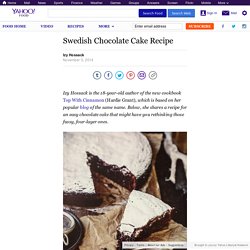 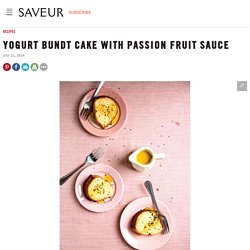 </span><span pearltreesdevid="PTD454">saveur</span><span pearltreesdevid="PTD456">. Lime yogurt cake with blackberry sauce. Seeing as I can’t get enough of those I Don’t Need A Special Occasion To Make Cake Cakes and also those Of Course You Can Stop By At The Last Minute (psst, ’cause I’d already made some cake) Cakes, I am clearly long overdue to make a classic French yogurt cake. 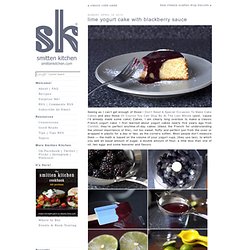 I first learned about yogurt cakes nearly five years ago from Clotilde; they’re perfect anytime-of-day cakes (bless the French for understanding the utmost importance of this), not too sweet, fluffy and perfect just from the oven or wrapped in plastic for a day or two, as the corners soften. Most people don’t measure them — the math is based on the volume of your yogurt cups (they use two), to which you add an equal amount of sugar, a double amount of flour, a little less than one of oil, two eggs and some leavener and flavors. Those flavors are usually gentle things, like a bit of lemon zest, or vanilla, a splash of rum or maybe a handful of berries. Ranger Cookie Recipe. Mike and I love going on long rambling walks that go nowhere in particular. 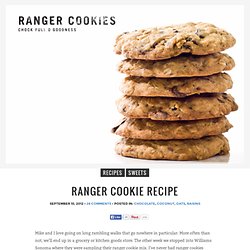 More often than not, we’ll end up in a grocery or kitchen goods store. The other week we stopped into Williams Sonoma where they were sampling their ranger cookie mix. I’ve never had ranger cookies before but how could I say no to oats, chocolate, raisins and coconut? These cookies go by a plethora of names (cowboy cookies, kitchen sink cookies, everything cookies) but they’re completely new to me. Basically, they’re a raisin oatmeal cookie with extra add-ins. Chocolate Mousse. Microwave Caramel Sauce. Microwave Caramel Sauce Ever since I learned how to make homemade caramel sauce as an alternative to buying the store-bought stuff, I’ve never looked back. 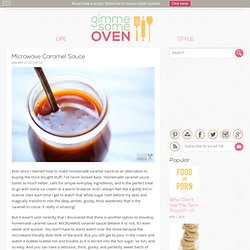 Chez Panisse Almond Tart Recipe. ROCKY ROAD CRUNCH BARS. Almond Cloud Cookies. Easy No Bake Raw Vegan Cheesecake Recipe (FOOD Bites) Trifle. Directions Slice the chocolate pound cake and make jam sandwiches with the cherry jam, and layer the bottom of a large wide trifle bowl. Pour over the cherry brandy so that the cake soaks it up, and then top with the drained cherries.

Cover with plastic wrap and leave to macerate while you make the custard. Melt the chocolate on low to medium heat in the microwave, checking after 2 minutes, though it will probably need 4 minutes. Or you can place it in a bowl over a pan of simmering water. In a saucepan warm the milk and cream. Whisk like mad, which will avert possible crisis. Beyond flourless chocolate cake and macaroons: chewy almond cookies. So Monday is the first day of Passover. I’m sure you’ve got your seder meal all planned. Except maybe the dessert. Hmmm, what’ll it be this year? Same old, same old? Jack Monroe's frozen yoghurt recipe. Jack Monroe's frozen yoghurt. Photograph: Graham Turner for the Guardian I first made these berry desserts with foraged blackberries and a few things from the fridge, but any berries will do. You can often get bags of mixed frozen berries far cheaper than their fresh counterparts, which are perfect for this simple dessert. (Makes 4 ramekins or lolly moulds) 34p a portion100g white chocolate, 30p100g mixed frozen berries, 33p150g soft cream cheese, 40p300g low fat natural yoghurt, 33p Break up the chocolate and melt it gently in a mixing bowl over a pan containing a couple of inches of boiling water.