Revealed: Bono And The Edge Of U2 Are Dropbox Investors. In the annals of celebrities investing in tech startups, this one’s looking especially smart. 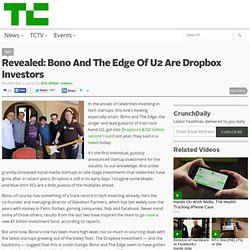 Bono and The Edge, the singer and lead guitarist of Irish rock band U2, got into Dropbox’s $250 million second round last year, they said in a tweet today. It’s the first individual, publicly announced startup investment for the vocalist, to our knowledge. And unlike grandly-conceived social media startups or late-stage investments that celebrities have gone after in recent years, Dropbox is still in its early days. I imagine some khakis-and-blue-shirt VCs are a little jealous of the multiples ahead. Elevation Partners. Lady Gaga, Tech Investor. Lady Gaga at Twitter headquarters For a girl whose father was worried about her getting a real job, Lady Gaga’s showing dear old dad there’s no cause for concern. Since reportedly going broke for the early portion of her pop star career, Lady Gaga’s taken on the title of Polaroid creative director, unofficial (and unwanted) ice cream muse, and Farmville promoter among other things. 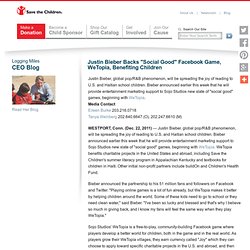 Bieber announced earlier this week that he will provide entertainment marketing support to Sojo Studios new slate of "social good" games, beginning with WeTopia. Media Contact Eileen Burke 203.216.0718Tanya Weinberg 202.640.6647 (O), 202.247.6610 (M) WESTPORT, Conn. (Dec. 22, 2011) — Justin Bieber, global pop/R&B phenomenon, will be spreading the joy of reading to U.S. and Haitian school children. Bieber announced the partnership to his 51 million fans and followers on Facebook and Twitter. Sojo Studios' WeTopia is a free-to-play, community-building Facebook game where players develop a better world for children, both in the game and in the real world. Learn more about Save the Children's role in the game and watch a fun video on how to play About Save the Children. MC Hammer. Early life and education[edit] Stanley Kirk Burrell was born on March 30, 1962 in Oakland, California. 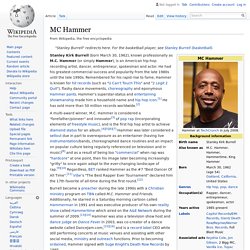 His father was a professional poker player and gambling casino manager (at Oaks Card Club's cardroom), as well as warehouse supervisor.[20] He grew up poor with his mother (a secretary) and eight siblings in a small apartment in East Oakland. The future rapper recalled that six children were crammed into a three-bedroom housing project apartment. The Burrells would also frequent thoroughbred horse races, eventually becoming owners and winners of several prestigious graded stakes.[20] Wiredoo: MC Hammer Announces A New Search Engine. “If you want to swing the bat, why not swing for the fences?” Will Ferrell. Early life Ferrell was born in Irvine, California,[2] the son of Betty Kay (née Overman; born 1940), a teacher who taught at Old Mill School elementary school and Santa Ana College,[4] and Roy Lee Ferrell, Jr. 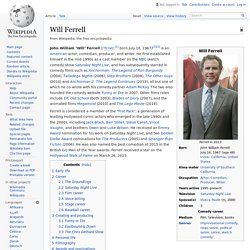 (born 1941), a musician with The Righteous Brothers.[5] His parents were both natives of Roanoke Rapids, North Carolina, and moved to California in 1964.[6][7] Ferrell's ancestry includes English, German, and Irish.[8][9][10] He has a younger brother named Patrick.[11] When he was eight years old, his parents divorced. Ferrell said of the divorce: "I was the type of kid who would say, 'Hey, look at the bright side! Justin Timberlake.

Shoestring Startups – Australian Startup & Small Business News, Profiles & How Tos. Of late there have been quite a few celebrities investing in tech startups and startups in general – including our own Hugh Jackman, who has recently co-founded a new incubator and coffee and tea company that supports and grows developing countries. 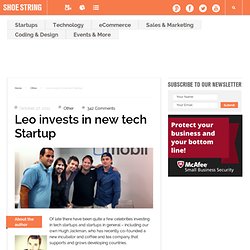 Leo was recently involved in a 4 million dollar seed round along with other pretty high profile investors for a new visual social media platform called Mobli. DiCaprio will take on an advisory position at Mobli. So what does Mobli do? People can take both pictures and videos and the application will automatically tag each media with a location or major event in the vicinity.

You can also write tags that other users can search for, allowing you to gain specific followers that match your interest. Ashton Kutcher. Kutcher currently stars as Walden Schmidt on the CBS sitcom Two and a Half Men, since Charlie Sheen's firing from the show in 2011. 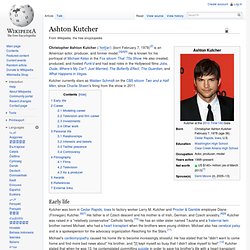 Early life. Shoestring Startups – Australian Startup & Small Business News, Profiles & How Tos. We see them on the big screen, are part of there million plus fan bases on social media and sing their number one hit tunes [badly] in the shower. But did you know that some of our favourite celebrities are also very savvy investors in the tech startup scene? We have compiled together our top 10 list of Celeb Tech Investors. You never know maybe one of this guys could be the perfect match for that capital you are looking for at the moment!