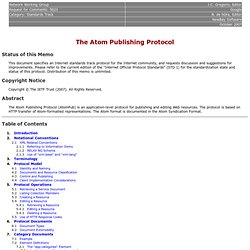 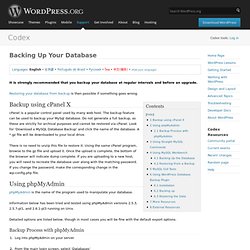 Restoring your database from backup is then possible if something goes wrong. Backup using cPanel X cPanel is a popular control panel used by many web host. There is no need to unzip this file to restore it. Using phpMyAdmin phpMyAdmin is the name of the program used to manipulate your database. Installer WordPress 3.0 en local avec MAMP. Support » MAMP - importing existing WordPress. COCOMO. The Constructive Cost Model (COCOMO) is an algorithmic software cost estimation model developed by Barry W. 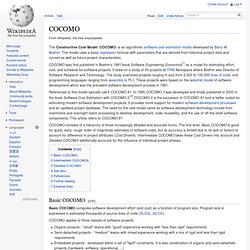 Boehm. The model uses a basic regression formula with parameters that are derived from historical project data and current as well as future project characteristics. COCOMO was first published in Boehm's 1981 book Software Engineering Economics[1] as a model for estimating effort, cost, and schedule for software projects. CSSE Website. Function point. Function Points project estimation. Fundamentals & Introduction of Function Point Analysis. Software systems, unless they are thoroughly understood, can be like an ice berg. 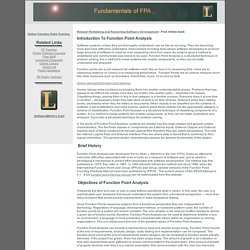 They are becoming more and more difficult to understand. Improvement of coding tools allows software developers to produce large amounts of software to meet an ever expanding need from users. As systems grow a method to understand and communicate size needs to be used. Function Point Analysis is a structured technique of problem solving. It is a method to break systems into smaller components, so they can be better understood and analyzed. Function points are a unit measure for software much like an hour is to measuring time, miles are to measuring distance or Celsius is to measuring temperature. Online self paced function point training. Human beings solve problems by breaking them into smaller understandable pieces. In the world of Function Point Analysis, systems are divided into five large classes and general system characteristics.

A 'traditional' male might enjoy the ironically not so exotic egg-and-bacon pie if his wife served it to him; a quiche-eater, or Sensitive New Age Guy is alleged to make the dish himself, call it by its French name quiche, and serve it to his female life partner to demonstrate his empathy with the Women's Movement. Presumably, he would also wash up afterwards. These are also implied examples of 'women's work', and an attempt to taint the male character by association with such knowledge and activities.

Sequels[edit] Real Programmer. The term Real Programmer is computer programmers' folklore to describe the archetypical "hardcore" programmer who eschews the modern languages and tools of the day in favour of more direct and efficient solutions – closer to the hardware. The alleged defining features of a "Real Programmer" are extremely subjective, differing with time and place, in the fashion of the "no true Scotsman" fallacy. The archetypal Real Programmer is Mel Kaye of the Royal McBee Computer Corporation who is immortalised in The Story of Mel, one of the most famous pieces of hacker folklore. As the story famously puts it, "He wrote in machine code – in 'raw, unadorned, inscrutable hexadecimal numbers. 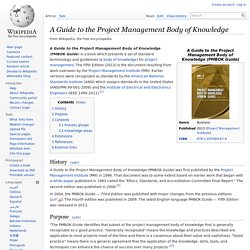 The Fifth Edition (2013) is the document resulting from work overseen by the Project Management Institute (PMI). Earlier versions were recognized as standards by the American National Standards Institute (ANSI) which assigns standards in the United States (ANSI/PMI 99-001-2008) and the Institute of Electrical and Electronics Engineers (IEEE 1490-2011).[1] History[edit] Ultra-mobile PC. An ultra-mobile PC[1] (ultra-mobile personal computer or UMPC) is a small form factor version of a pen computer, a class of laptop whose specifications were launched by Microsoft and Intel in spring 2006. 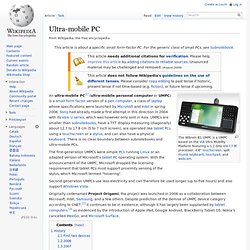 Sony had already made a first attempt in this direction in 2004 with its Vaio U series, which was however only sold in Asia. UMPCs are smaller than subnotebooks, have a TFT display measuring (diagonally) about 12.7 to 17.8 cm (5 to 7 inch screen), are operated like tablet PCs using a touchscreen or a stylus, and can also have a physical keyboard. There is no clear boundary between subnotebooks and ultra-mobile PCs. The first-generation UMPCs were simple PCs running Linux or an adapted version of Microsoft's tablet PC operating system. With the announcement of the UMPC, Microsoft dropped the licensing requirement that tablet PCs must support proximity sensing of the stylus, which Microsoft termed "hovering". Share Buttons, Share Plugin, Share Analytics, Media Solutions.

Home — Playframework. Play Framework. History[edit] Play was created by software developer Guillaume Bort, while working at Zenexity.[3] Although the early releases are no longer available online, there is evidence of Play existing as far back as May 2007.[4] In 2007 pre-release versions of the project were available to download from Zenexity's website.[5] Play 1.1 was released in November 2010 after a move from Launchpad to GitHub. 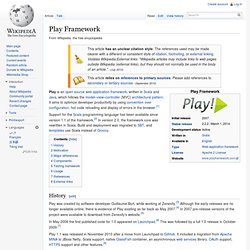 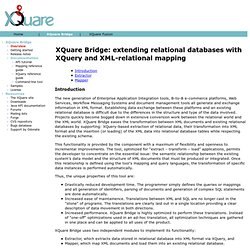 Establishing data exchange between these platforms and an existing relational database is difficult due to the differences in the structure and type of the data involved.