10 Ways to Raise Your Positive Vibrations! ( Use this!) The 12 Universal Laws That Governs Our Lives! (Create Your Life!) The Doctrine of Discovery and U.S. Expansion. "No person shall be…deprived of life, liberty, or property, without due process of law…" This idea, which is a bedrock of American democracy, is from the Fifth Amendment to the U.S. 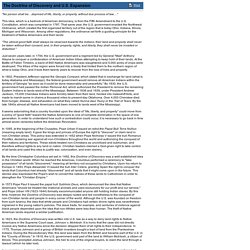 Constitution, which was completed in 1787. That same year, the U.S. government enacted the Northwest Ordinance, which created the first organized territory out of the region that is today Ohio, Indiana, Illinois, Michigan and Wisconsin. Among other regulations, the ordinance set forth a guiding principle for the treatment of Native Americans and their lands: "The utmost good faith shall always be observed towards the Indians; their land and property shall never be taken without their consent; and, in their property, rights, and liberty, they shall never be invaded or disturbed. " Just seven years later, in 1794, the U.S. government sent a regiment led by General "Mad" Anthony Wayne to conquer a confederation of American Indian tribes attempting to keep hold of their lands.

Questions: Nuns to pope: Revoke 15th-century doctrine that allows Christians to seize native land. (RNS) In November, Sister Maureen Fiedler hand-delivered a letter to Pope Francis’ ambassador in Washington, D.C., urging the pontiff to renounce a series of 15th-century church documents that justify the colonization and oppression of indigenous peoples. 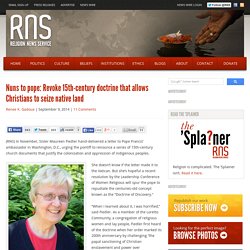 Show caption In November, Sister Maureen Fiedler hand-delivered a letter to Pope Francis’ ambassador in Washington, D.C., urging the pontiff to renounce a 15th-century church document that justifies the colonization and oppression of indigenous peoples. Photo courtesy of Jean M. Schildz, The Loretto Community This image is available for Web and print publication. Discovery doctrine. Chief Justice John Marshall The 1823 case was the result of collusive lawsuits where land speculators worked together to make claims to achieve a desired result.[1][2] John Marshall explained the Court's reasoning. 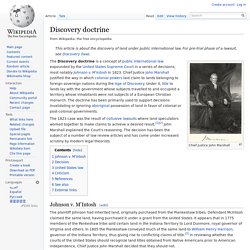 The decision has been the subject of a number of law review articles and has come under increased scrutiny by modern legal theorists. Johnson v. M'Intosh[edit] The plaintiff Johnson had inherited land, originally purchased from the Piankeshaw tribes. Decision[edit] Marshall found that ownership of land comes into existence by virtue of discovery of that land, a rule that had been observed by all European countries with settlements in the New World. Marshall noted: United States law[edit] Five Hundred Years of Injustice. The Legacy of Fifteenth Century Religious Prejudice by Steve Newcomb. 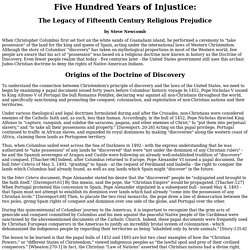 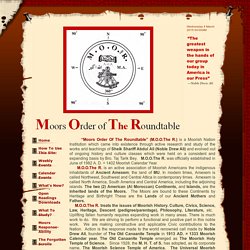 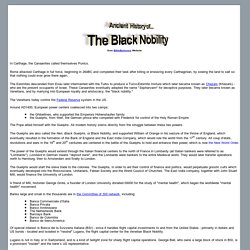 Rome attacked Carthage in full force, beginning in 264BC and completed their task after killing or enslaving every Carthaginian, by sowing the land to salt so that nothing could ever grow there again. The Edomites descended from Esau later intermarried with the Turks to produce a Turco-Edomite mixture which later became known as Chazars (Khazars) - who are the present occupants of Israel. These Canaanites eventually adopted the name "Sepharvaim" for deceptive purposes. They later became known as Venetians, and by marrying into European royalty and aristocracy, the "black nobility. " The Venetians today control the Federal Reserve system in the US. Around AD1400, European power centers coalesced into two camps: SECRET TREATY OF VERONA. 64th CONGRESS, 1st SESSION Page 6781 25 April 1916. 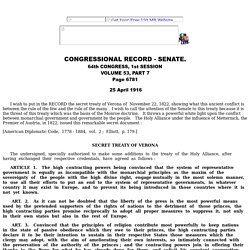 Writs Of Freedom. Continue further on this Page for other Writs, articles and information, of which there are many, already prepared and provided free on this page, for your Study and for your use. 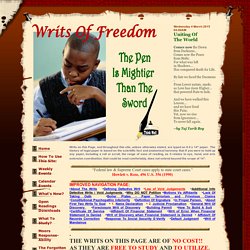 We take this opportunity to remind you all again that the Writs on the ‘Writs of Freedom’ page are intended to serve as beacon lights and examples of expressing the Law. The Writs don’t necessarily make you ‘Free’. It is your own Comprehension, Mental Status and ability to express the facts that set you free. Birdman Bryant: THE STORY OF THE BUCK ACT. The Moorish National Republic - Moorish Nation Public Records. 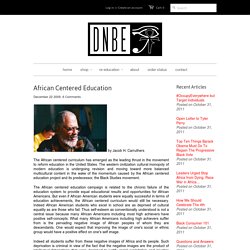