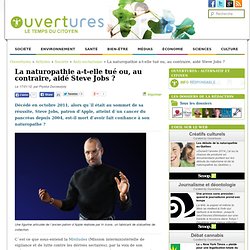 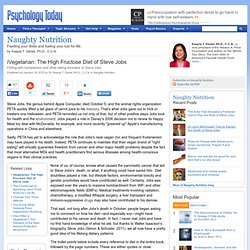 That's what Jobs gave out to trick or treaters one Halloween, and PETA reminded us not only of that, but of other positive steps Jobs took for health and the environment. Jobs played a role in Disney's 2006 decision not to renew its Happy Meal toy deal with McDonalds, for example, and more recently "greened up" Apple's manufacturing operations in China and elsewhere. Sadly, PETA has yet to acknowledge the role that Jobs's near vegan diet and frequent fruitarianism may have played in his death. Indeed, PETA continues to maintain that their vegan brand of "right eating" will virtually guarantee freedom from cancer and other major health problems despite the fact that most alternative MDs and health practitioners find serious illnesses among health-conscious vegans in their clinical practices. That's it.

Why Did Steve Jobs Die? John A. McDougall. John A. 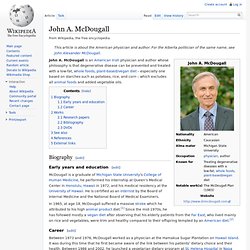 McDougall is an American Irish physician and author whose philosophy is that degenerative disease can be prevented and treated with a low-fat, whole foods, plant-based/vegan diet – especially one based on starches such as potatoes, rice, and corn – which excludes all animal foods and added vegetable oils.

Biography[edit] Early years and education[edit] McDougall is a graduate of Michigan State University’s College of Human Medicine, he performed his internship at Queen’s Medical Center in Honolulu, Hawaii in 1972, and his medical residency at the University of Hawaii. He is certified as an internist by the Board of Internal Medicine and the National Board of Medical Examiners. Career[edit] In 2002, he began the McDougall Program at the Flamingo Resort in Santa Rosa, California.

McDougall is the co-founder and chairman of Dr. McDougall is the author of several books, including The McDougall Plan (1983). Works[edit] Research papers[edit] Bibliography[edit] The Starch Solution (2012)Dr. McDougall Program Advanced Study Weekend (3-day program in Santa Rosa, CA. The McDougall 3-Day Advanced Study Weekend in Santa Rosa, California These weekends are held twice a year and are dedicated to broadening the understanding of plant-food based nutrition and conservative medical care. 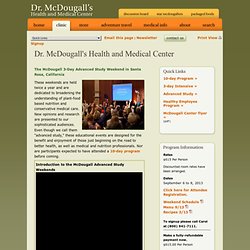 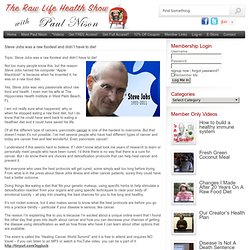 Not too many people know this, but the reason Steve Jobs named his computer “Apple Macintosh” is because when he invented it, he was on a raw food diet. Yes, Steve Jobs was very passionate about raw food and health. I even met his wife at The Hippocrates Health Institute in West Palm Beach, FL I am not really sure what happened, why or when he stopped eating a raw food diet, but I do know that he could have went back to eating a healthier diet and it could have saved his life. Of all the different type of cancers, pancreatic cancer is one of the hardest to overcome. I understand if this seems hard to believe. Not everyone who uses the best protocols will get cured, some simply wait too long before trying. It’s not rocket science, but it also makes sense to know what the best protocols are before you go into a practice blindly – particular if your disease is serious, like cancer.

You can register here now… PS.