Susu Basic Course. Final Report. The introductory section of this basic course in Susu presents the phonology of the language--vowels, consonants, intonation, vowel contractions and conditioning, and tones. 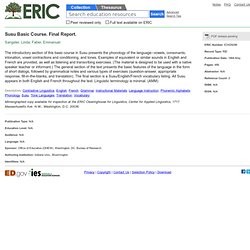 Examples of equivalent or similar sounds in English and French are provided, as well as listening and transcribing exercises. (The material is designed to be used with a native speaker teacher or informant.) The general section of the text presents the basic features of the language in the form of short dialogs, followed by grammatical notes and various types of exercises (question-answer, appropriate response, fill-in-the-blanks, and translation). The final section is a Susu/English/French vocabulary listing. All Susu appears in both English and French throughout the text. Descriptors: Contrastive Linguistics, English, French, Grammar, Instructional Materials, Language Instruction, Phonemic Alphabets, Phonology, Susu, Tone Languages, Translation, Vocabulary. 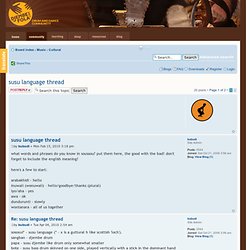 I heard also that for many people Soussou language was used as a trade language, not as the original native tongue. I don't know grammatics of Soussou, nor don't know pronunciation rules. What I have noted similarly to bubudi, but sometimes in another context: Information about Susu Language. Susu language translator. Susu people. The Susu people (Susu: Soso; French: Soussou) are a major Mande ethnic group living primarily in Guinea. 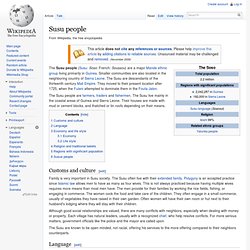 Smaller communities are also located in the neighboring country of Sierra Leone. The Susu are descendants of the thirteenth century Mali Empire. They moved to their present location after 1725, when the Fulani attempted to dominate them in the Fouta Jalon. The Susu people are farmers, traders and fishermen. The Susu live mainly in the coastal areas of Guinea and Sierra Leone.

Customs and culture[edit] Family is very important in Susu society. Although good social relationships are valued, there are many conflicts with neighbors, especially when dealing with money or property. The Susu are known to be open minded, not racial, offering his services to the more offering compared to their neighbors counterparts. Language[edit] Their language, called Sosoxui by native speakers, serves as a major trade language along the Guinean coast, including the capital city of Conakry. Economy[edit] Zoe's Blog. Report for language code: sus. Susu language. The Susu language (endonym Sosoxui; French: Soussou) is the language of the Susu or Soso people of Guinea, West Africa. 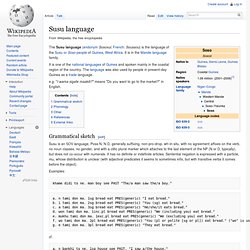 It is in the Mande language family. It is one of the national languages of Guinea and spoken mainly in the coastal region of the country. The language was also used by people in present-day Guinea as a trade language. e.g. "I wama sigafe maakiti? " Grammatical sketch[edit] Susu is an SOV language, Poss-N, N-D, generally suffixing, non-pro-drop, wh-in-situ, with no agreement affixes on the verb, no noun classes, no gender, and with a clitic plural marker which attaches to the last element of the NP (N or D, typically), but does not co-occur with numerals.

Examples: khame didi to ne. man boy see PAST "The/a man saw the/a boy. " cf. a. n bankhi to ne. 1sg house see PAST. Object pronouns have the same form as subject pronouns: a. khame n to ne. man 1sg see PAST. Learning to speak Susu in Sierra Leone. I’m at the end of my first month back in Sierra Leone. It has been a busy but exciting time at Health Unlimited since I arrived. Crossing the Little Scarcies river We have spent many hours driving on extremely bumpy roads and crossing rivers on a wooden ‘ferry’ to get to some of the remote areas that Health Unlimited is working in. We have been spending days at a time out of mobile phone coverage, without electricity or running water to carry out assessments into gender issues and their impact upon health and development in rural communities in the Northern Bombali District of Sierra Leone. The benefits of being in such a remote area are being able to have your evening wash under the shade of the banana trees and eat grapefruits just plucked from the tree.

A Focus group with teenage girls I’ve had the opportunity to practice my Krio, try out the few Temne words I know and even learn some Susu. A focus group with women in Kamaranka There is a massive shortage of skilled health staff here. Learn susu language. Learn susu.