Dysfunctional family - Wikipedia, the free encyclopedia. Perceptions[edit] A common misperception of dysfunctional families is the mistaken belief that the parents are on the verge of separation and divorce. 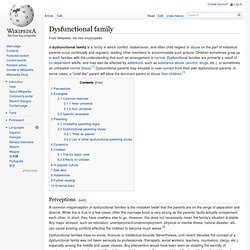 While this is true in a few cases, often the marriage bond is very strong as the parents' faults actually complement each other. In short, they have nowhere else to go. However, this does not necessarily mean the family's situation is stable. Any major stressor, such as relocation, unemployment/underemployment, physical or mental illness, natural disaster, etc. can cause existing conflicts affecting the children to become much worse.[2] Dysfunctional families have no social, financial or intellectual bounds.

Examples[edit] Dysfunctional family members have common features and behavior patterns as a result of their experiences within the family structure. Common features[edit] Near universal[edit] Some features are common to most dysfunctional families: Non universal[edit] Specific examples[edit] Roles in the Addicted Family. When a parent is addicted to alcohol, drugs, or processes, over time the entire family is organized around the addict and the emotional chaos he or she generates. 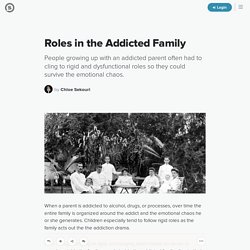 Children especially tend to follow rigid roles as the family acts out the the addiction drama. Even though clinging to rigid, unchanging roles makes no sense to people outside the family, people inside the addicted family cling to their roles as though their very survival depends on it. The family as a unit uses roles to create the illusion of stability and normalcy. This illusion helps the family members carry on in the face of the addict's unpredictable and harmful behaviors, but they pay a terrible price. Making Peace in Dysfunctional Families: How to Fix It and Whether You Should « The Spiritual Eclectic. Genuinely enjoying one another’s company. A family outing to Grayton Beach, with Lorna, Aislinn, Shannon, and Brian. All photos copyrighted.

In every dysfunctional family, there’s at least one do-goodin’ peacemaker who is either a blood relative, an in-law, or a “concerned family friend.” Ironically, it’s usually not so much about making peace among hostile relatives but about being a hero—even through manipulative tactics designed to force everyone to make nice that really achieves nothing below the surface. At least, that’s how it has been in my family…over and over and over again. I grew up in a dysfunctional family. They say blood is thicker than water, but in my family, so is toothpaste.

My life now is 180-degrees from how I grew up. Yet, every so often, someone wants to step in and “set things right.” That’s not to say that families can’t be reunited or that re-discovering long-lost cousins can’t be wondrous. 1. 2. 3. Strained Family Relationships; When To Cut The Ties. What is Family? 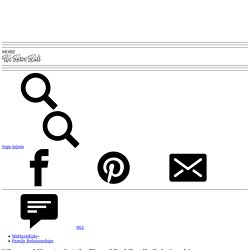 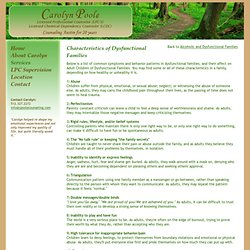 You may find some or all of these characteristics in a family, depending on how healthy or unhealthy it is. 1) Abuse Children suffer from physical, emotional, or sexual abuse; neglect; or witnessing the abuse of someone else. As adults, they may carry the childhood pain throughout their lives, as the passing of time does not seem to heal trauma. 2) Perfectionism Parents' constant criticism can leave a child to feel a deep sense of worthlessness and shame. As adults, they may internalize those negative messages and keep criticizing themselves. The fragmented family: Parental Alienation. Details Published: 13 August 2011 Hits: 8639 Parental Alienation occurs when one parent turns a child against the other parent, and it can devastate relationships, writes Lynda Renham-Cook. 14 August 2011 Parental Alienation hit the headlines in a big way a few years ago thanks to the actor Alec Baldwin. 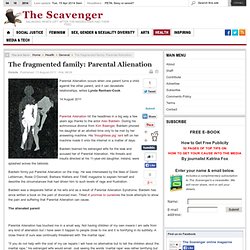 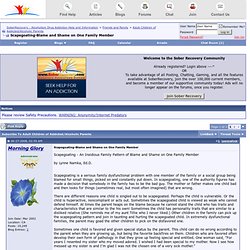 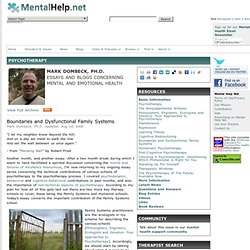 Updated: Aug 1st 2006 "I let my neighbor know beyond the hill; And on a day we meet to walk the line And set the wall between us once again. " - from "Mending Wall" by Robert Frost Another month, and another essay. After a two month break during which I seem to have facilitated a spirited discussion concerning the merits and failures of Alcoholics Anonymous, I'm now returning to my ongoing essay series concerning the technical contributions of various schools of psychotherapy to the psychotherapy process.

How Addiction Changes a Child’s Role in the Family – Scapegoat, Hero, Super Enabler, or Disappearing Act. We are thrilled to have a guest post from Ken Powers, co-author of We Codependent Men We Mute Coyotes. 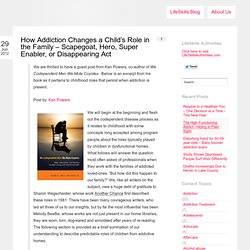 Below is an excerpt from his book as it pertains to childhood roles that persist when addiction is present. Post by: Ken Powers We will begin at the beginning and flesh out the codependent disease process as it relates to childhood with some concepts long accepted among program people about the roles typically played by children in dysfunctional homes. What follows will answer the question most often asked of professionals when they work with the families of addicted loved-ones. “But how did this happen to our family?”