Sequential Art. I don’t blame her man, bras are not easy to wash. Funny story I started brainstorming this strip after I’d gotten back from the gym and was like “ugh I really don’t want to go downstairs to the kitchen but I can’t leave whey protein in this blender bottle overnight, I wonder if this actually works…” and ended up washing my water bottle in the shower Full disclosure, I basically spent my entire weekend making Iron Bull Horns for ComicCon and ended up doing this in like two hours sitting on the floor of my friend’s housewarming party. 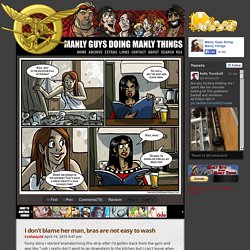 I feel like Jones would live in kind of a poorly lit basement apartment with a bunch of roommates as is typical of cool young people living downtown and spending barely any time in their homes (and by “young” I mean Jones is older than me but Los Angeles crushes our wills and domesticates us by being the most inconvenient city to try to have fun in) Least I Could Do: the Comic. Girl Genius. Girl Genius is written by Professors Phil & Kaja Foglio of TPU, with drawings by Prof. 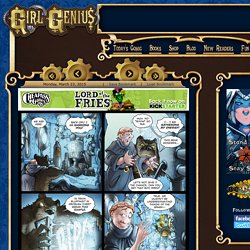 P. Foglio. Goblins » Archive » 02/11/2015. Calling Los Angeles Goblinites February 6th, 2015 This is another one of those weird times, where I use this blog to try and help someone that we don’t know, but is in a bit of trouble. 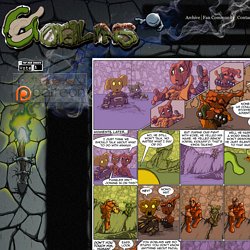 A Goblins reader has a friend in Los Angeles who is about to be kicked out of her place for reasons outside of her control. She’s got a place set up for the end of February but without help, she’s totally screwed until then. If you’re in the LA area and have the ability and space to let someone crash with you until the end of the month or even just part of that time, please contact her through her Twitter. POWER NAP - In man's struggle against the world, bet on the world. Least I Could Do: the Comic. Monday, Wednesday, and Friday. What is this thing? 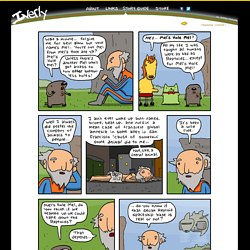 Use these handy tagging functions while reading! Want to take a break? Darths & Droids. The title is, of course, an extract from the famous Gilbert & Sullivan opera: I am the very model of a modern Gungan General, I've information vegetable, dinosaur, and mineral; I know the Queens of Naboo, and I led the fights historical, From Tatooine to Coruscant, in order categorical.I'm very well acquainted, too, with matters Senatorial; I understand accoutrements, both simple and sartorial, Regarding eating humans I am teeming with a lot o' news - With many cheerful facts about the flavour of those nice Naboos. 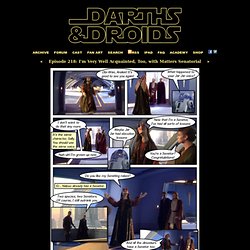 Transcript Jar Jar: Obi-Wan, Anakin! Darwin Carmichael is Going to Hell. Some readers suggested we put up a “placeholder” to protect new readers from the hardship of spoilers. 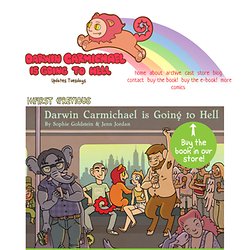 It seemed like a good idea, so here we are! Please consider supporting this comic and the artists by buying a book! If you’re a new reader, here are a couple words of praise (taken from the comments section on the last strip) to encourage you: Giant In the Playground Games. Murder Brothers » Murder Brothers #50. Gone with the Blastwave - Because war can be boring too. Shakedown. Nimona chapter 11 - page 24. This is Problemtown. Completely Serious Comics - Sheencraft. The Adventures of The 19XX - 01/13/2010. Not much to say this week, I’m going to New Orleans in two days, so my mind is kind of on that. 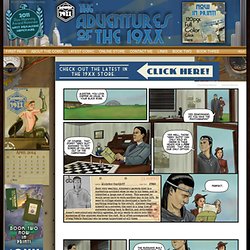 Ok, wait I thought of something… The line about the runway being too short… I went to the Minter Field Air Museum in Shafter last summer. It was something like 110 degrees outside and a B-17 was supposed to be there. But when we got there we learned that the runway was too short for the plane to land on because of the heat. If it landed it wouldn’t have been able to take off again. Supernormal Step - Something Like That. En Passant - Blank It. What Goes Around - Blank It. Shifty Pompadour - Blank It. 022 – grave danger. 129 by Jeff Dabu. Looking For Group. Advertisement News Latest Archive Comics Looking For Group Non-Playable Character Tiny Dick Adventures Community Forums Facebook Reddit Shop Books Clothes Stuff Mondays & Thursdays. 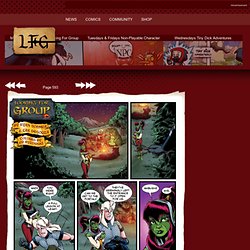 Guilded Age - Fantasy Comic every Monday, Wednesday and Friday. Questionable Content. Girls with Slingshots. Curvy. Go Get a Roomie! - Updates Monday, Wednesday, Friday - Almost. 178 – Dead Line. Dresden Codak » Comics. Beartrayal. Nanook, bear god of the Inuit people, seems to be pretty lazy these days. You would think that with shrinking ice for the polar bears and destruction of habitat for grizzlies and black bears, he would be laying some extinction on humanity. Turns out, he’s been sleeping. Leave it to Lil K to wake him up and destroy us all in his zeal. How old is he anyway? A few strips back had him saying he was eleven and now he says he is eight. The Zombie Hunters. 4.04. All schedule info continues to be posted to FB page, please check here first if you have a question about (lack of) updates. 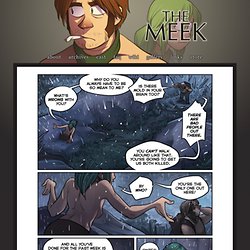 First, sorry for the late update. If you’re following the Facebook page even a little you’ll know I took a trip, got hired for reals (first day is tomorrow), then started dealing with some pain/ medical issues. Saturday Morning Breakfast Cereal. May 31, 2006 Discuss this comic in the forum May 30, 2006 May 29, 2006 May 28, 2006 Yeah fine. 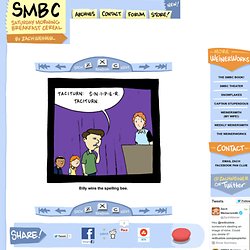 Out There - Friday, January 7, 2011. Archive - Twokinds - Updates Wednesdays. Lulu Cthulhu - Page 18. Athena Wheatley, or, Warp & Weft; A Graphic Novel. I had an epiphany. Lair of the Trapmaster. Ctrl+Alt+Del. Xkcd.