Weekly discussion: What technological threats exist in a connected environment and how might I protect myself and my students?

Hacktivism: good or evil? Wikipedia is always a good source of definitions for technology-related issues.

This was a very interesting article Professor Lee provided within a comment to my initial blog posting. It wonderfully summarizes the BBC video I found and adds additional information to ponder. – dpoetter

It defines hacktivism as “the use of computers and computer networks to promote political ends, chiefly free speech, human rights, and information ethics”. 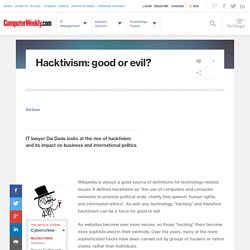 As with any technology, “hacking” and therefore hacktivism can be a force for good or evil. As websites become ever more secure, so those “hacking” them become more sophisticated in their methods. Over the years, many of the more sophisticated hacks have been carried out by groups of hackers or nation states, rather than individuals. LulzSec Two of the most widely known groups are Anonymous and Lulz Security (more commonly abbreviated to LulzSec). However, in the case of LulzSec, the group has (allegedly) disbanded and some of its members arrested.

Early attacks The range of targets for these organisations has been wide. This tactic was then added to by its internet equivalent – a denial-of-service attack. Is hacking worse than a physical attack? Malware. Malware, short for malicious software, is any software used to disrupt computer operation, gather sensitive information, or gain access to private computer systems.[1] Malware is defined by its malicious intent, acting against the requirements of the computer user, and does not include software that causes unintentional harm due to some deficiency. 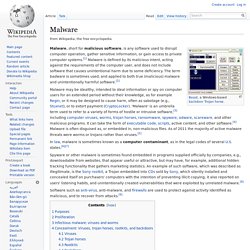 The term badware is sometimes used, and applied to both true (malicious) malware and unintentionally harmful software.[2] In law, malware is sometimes known as a computer contaminant, as in the legal codes of several U.S. states.[6][7] Spyware or other malware is sometimes found embedded in programs supplied officially by companies, e.g., downloadable from websites, that appear useful or attractive, but may have, for example, additional hidden tracking functionality that gathers marketing statistics.

Purposes[edit] Malware by categories on 16 March 2011. Proliferation[edit] Infectious malware: viruses and worms[edit] Viruses[edit] Rootkits[edit] THE HISTORY OF COMPUTER HACKING - BBC - Discovery Science Technology (full documentary) What Your Students Really Need to Know About Digital Citizenship. The greatest software invented for human safety is the human brain. It's time that we start using those brains. We must mix head knowledge with action. In my classroom, I use two essential approaches in the digital citizenship curriculum that I teach: proactive knowledge and experiential knowledge.

Proactive Knowledge I want my students to know the "9 Key Ps" of digital citizenship. 1. Do students know how to create a secure password? 2. Do students know how to protect their private information like address, email, and phone number? 3. While this information (like the number of brothers and sisters you have or your favorite food) can't be used to identify you, you need to choose who you will share it with. 4.

Are students aware that some private things may show up in photographs (license plates or street signs), and that they may not want to post those pictures? 5. Welcome to the Egan Library proxy server! The-five-biggest-threats-to-your-kids-privacy-and-79062872970. Remember back in school, when your teachers warned that everything you did would go on your permanent record?