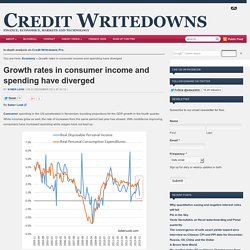 You are here: Economy » Growth rates in consumer income and spending have diverged. A practical critique of NGDP targeting. Summary: NGDP growth is equal to real GDP growth plus inflation. 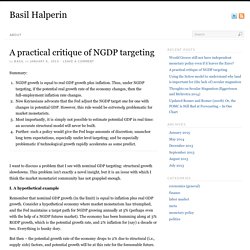 Thus, under NGDP targeting, if the potential real growth rate of the economy changes, then the full-employment inflation rate changes.New Keynesians advocate that the Fed adjust the NGDP target one for one with changes in potential GDP. However, this rule would be extremely problematic for market monetarists.Most importantly, it is simply not possible to estimate potential GDP in real time: an accurate structural model will never be built.Further: such a policy would give the Fed huge amounts of discretion; unanchor long term expectations, especially under level targeting; and be especially problematic if technological growth rapidly accelerates as some predict. I want to discuss a problem that I see with nominal GDP targeting: structural growth slowdowns. This problem isn’t exactly a novel insight, but it is an issue with which I think the market monetarist community has not grappled enough. Why economists failed to anticipate the financial crisis. 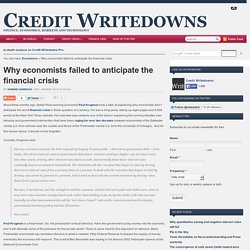 You are here: Economics » Why economists failed to anticipate the financial crisis About three months ago, Nobel Prize winning economist Paul Krugman took a stab at explaining why economists didn’t anticipate the worst financial crisis in three-quarters of a century. Disproving Liberal Economic Theory in One Chart. In early December, President Obama gave a speech on the economy. 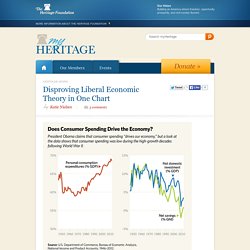 He blamed “the rich” for slowing economic growth by concentrating their wealth in savings and investment rather than spending it on consumption. Heritage Foundation economist Salim Furth explains why the President’s claim is misguided: The President apparently believes that consumer spending, rather than savings and investment, drives economic growth. But, as this chart shows, personal consumption is at a post-war high as a share of national expenditure. If consumer spending really did drive the economy, it would be booming.All that consumption comes at the expense of net investment, which shows a clear downward trend since the 1950s. The President also blames income inequality for the decline in growth, but Furth concludes based on the literature that “there are much stronger forces in the economy. What is proven to contribute to a healthy economy is fairer, more open, and more dynamic competition in the American economy. 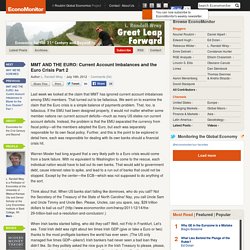 Randall Wray · · Share This Print 90 39 Last week we looked at the claim that MMT has ignored current account imbalances among EMU members. Mainly macro: What have Keynesians learnt since Keynes? That is the question asked by RobertWaldman (9th Feb) in a comment on my post, and also in a dialog with Mark Thoma. 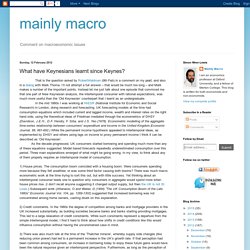 I’ll not attempt a full answer – that would be much too long – and Mark makes a number of the important points. Instead let me just talk about one episode that convinced me that one part of New Keynesian analysis, the intertemporal consumer with rational expectations, was much more useful than the ‘Old Keynesian’ counterpart that I learnt as an undergraduate. In the mid 1980s I was working at NIESR (National Institute for Economic and Social Research) in London, doing research and forecasting. UK forecasting models at the time had consumption equations which included current and lagged income, wealth and interest rates on the right hand side, using the theoretical ideas of Friedman mediated through the econometrics of DHSY (Davidson, J.E.H., D.F.

Hendry, F. 1) House prices. Wohin wollen wir wachsen?: Schluss mit der Nachhaltigkeitslüge! - Feuilleto. Netzwerk Plurale Ökonomik e.V. The Mathematicization of Economics « azizonomics. If one thing has changed in the last one hundred years in economics it has been the huge outgrowth in the usage of mathematics: This is largely a bad development, for a number of reasons. 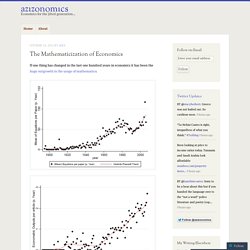 First of all layers of mathematics acts as a barrier to public understanding. While mathematics is a useful language for communicating complex ideas, those without training in mathematics will struggle to grasp what an author is trying to communicate if a paper consists mostly of equations untranslated into English. This is bad practice; it is easier to baffle with bullshit in an unfamiliar language than it is in plain English. Second, mathematical models are always simplifications. 10 reasons why economics is an art, not a science - The Washington Post. That’s a quip from David Rosenberg, former chief economist at Merrill Lynch who is now working at Gluskin Sheff, the wealth management shop. 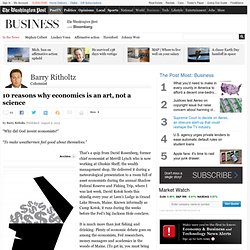 He delivered it during a meteorological presentation to a room full of asset economists during the annual Shadow Federal Reserve and Fishing Trip, where I was last week. David Kotok hosts this shindig every year at Leen’s Lodge in Grand Lake Stream, Maine. Known informally as Camp Kotok, it runs during the weeks before the Fed’s big Jackson Hole conclave. It is much more than just fishing and drinking: Plenty of economic debate goes on among the economists, Fed researchers, money managers and academics in the woods of Maine.

(To get in, you must bring a case of wine, and woe to the attendee who pours substandard vino.)