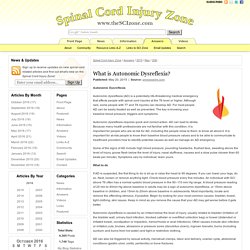 Although rare, some people with T7 and T8 injuries can develop AD. For most people, AD can be easily treated as well as prevented. The key is knowing your baseline blood pressure, triggers and symptoms. Autonomic dysreflexia requires quick and correct action. What is spasticity and neuropathic pain? Published: September 18, 2004 Spinal cord injury disconnects the brain from the spinal cord below the injury site. 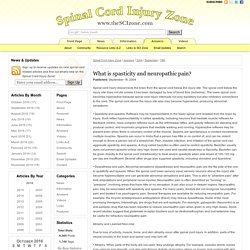 The spinal cord below the injury site does not die unless it has been damaged by loss of blood flow (ischemia). The lower spinal cord becomes hyperactive because spinal cord injury interrupts not only excitatory but also inhibitory connections to the cord. The spinal cord above the injury site also may become hyperactive, producing abnormal sensations. 10 Ways Stay-at-Home Moms and Dads Can Make Extra Money. If you haven't used your free time between changing diapers, washing clothes and shuttling kids around to hop on the blog bandwagon, it's worth considering this potential source of income. 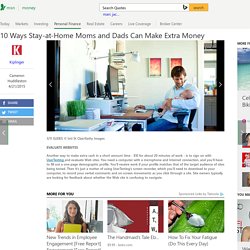 And just because you're a parent doesn't mean you have to write about parenting issues. In fact, given that there already are so many blogs about life as a mom (or dad), consider writing about another topic about which you are passionate. The more original, entertaining and informative you are, the more likely you'll gain followers - and you need an online following to make money. You can create your blog using a free platform from WordPress.org, but you'll need to pay a small amount - as little as $4 per month - to have your blog hosted. Try GoDaddy.com, which can provide a domain name for your site, email addresses, database storage and other Web hosting services.

The Science of Cannabinoids. Cannabinoids have an extensive history dating back thousands of years, and currently there are thousands of peer-reviewed scientific publications that document the underlying biochemical pathways that cannabinoids modulate. 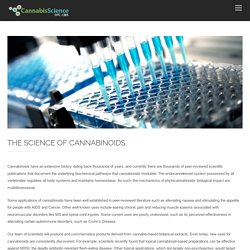 The endocannabinoid system possessed by all vertebrates regulates all body systems and maintains homeostasis. Switch in nerve pain medication: Pregabalin to Gabapentin - Recovering from Surgery. Hi all, as some may know I underwent an L4 / S1 PLIF in February this year, and have been making progress in my recovery over the last several months and beginning a phased return to work. 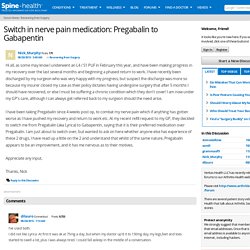 I have recently been discharged by my surgeon who was very happy with my progress, but suspect the discharge was more so because my insurer closed my case as their policy dictates having undergone surgery that after 5 months I should have recovered, or else I must be suffering a chronic condition which they don't cover! I am now under my GP's care, although I can always get referred back to my surgeon should the need arise. Spinal Cord Injury Centre. Rehabilitation with Ekso Bionics™ Exoskeleton The exoskeleton is an electromechanical device which, as its name suggests, simulates an external skeleton and allows people with partial or total absence of strength in one or both legs to walk. 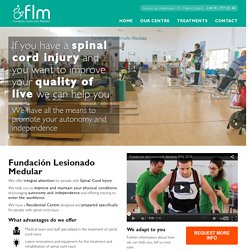 Thus, it makes gait possible in an almost natural way. It has different settings, being able to select degrees of force exerted by the device according to the strength of the person. It also has types of action, so that it may be activated by the patient himself as the rehabilitation progresses, always under the supervision of qualified personnel. Do-you-bladder-243797. Quadriplegia : Quadriplegic.

Contents Causes of Quadriplegia Quadriplegia (tetraplegia) is caused by damage to the cervical spinal cord segments at levels C1-C8. 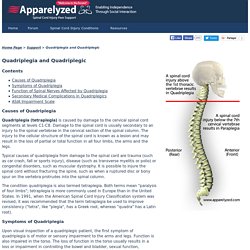 Damage to the spinal cord is usually secondary to an injury to the spinal vertebrae in the cervical section of the spinal column. The injury to the cellular structure of the spinal cord is known as a lesion and may result in the loss of partial or total function in all four limbs, the arms and the legs. Typical causes of quadriplegia from damage to the spinal cord are trauma (such as car crash, fall or sports injury), disease (such as transverse myelitis or polio) or congenital disorders, such as muscular dystrophy. The condition quadriplegia is also termed tetraplegia. Symptoms of Quadriplegia. Tn Top Myths Re Diagnosis And Treatment Of Utis - Bladder & Bowel - Quadriplegic and Paraplegic Spinal Cord Injuries. If your doctors are reading current guidelines, this is what they are being told and it is for all patients, not just those using catheterization. 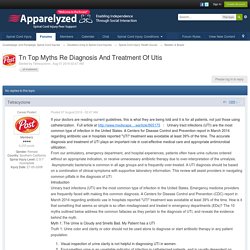 Full article at :Urinary tract infections (UTI) are the most common type of infection in the United States. A Centers for Disease Control and Prevention report in March 2014 regarding antibiotic use in hospitals reported "UTI" treatment was avoidable at least 39% of the time. The accurate diagnosis and treatment of UTI plays an important role in cost-effective medical care and appropriate antimicrobial utilization. Elon Musk Is Wrong. We Aren't Living in a Simulation. Illustrations by 30000fps A simulated apple can't feed anybody, and other reality checks by a philosopher and a cognitive scientist. 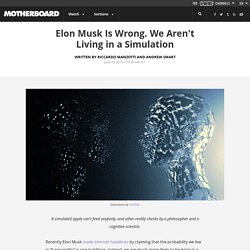 Recently Elon Musk made internet headlines by claiming that the probability we live in “base reality” is one in billions. Instead, we are much more likely to be living in a historical ancestor simulation created by an advanced future civilization some 10,000 years from now. “The strongest argument for us being in a simulation, probably being in a simulation is the following: 40 years ago, we had pong, two rectangles and a dot,” the SpaceX and Tesla founder said. “That is what games were. “There’s a one in billions chance [we’re in] base reality... It is probably not Musk’s most original idea. Lyrica or Neurontin? Switch in nerve pain medication: Pregabalin to Gabapentin - Recovering from Surgery.

Careers & Corporate Culture. Dramatic Botox Side Effects - Spinal Cord Injury Health Issues - Quadriplegic and Paraplegic Spinal Cord Injuries. Dave...that is why I am scheduled later this month to have the injections for the first time - because I am so stiff. 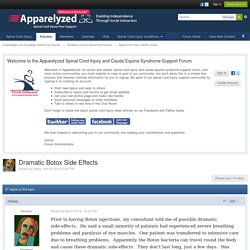 I just found out that even though my spinal cord injury could have been a lot worse - spasticity can be really bad, as it is with me. In other words, it doesn't matter how bad the spinal cord injury is when it comes to spasticity., the severity of the injury does not determine spasticity. Etoricoxib: new drug. Avoid using cox-2 inhibitors for pain. Do acute SCI patients see better outcomes if undergoing surgery within 1st 4 hours? Researches in Germany studied whether time of surgery impacted neurological outcomes for patients with acute spinal cord injury, according to Journal of Therapeutics and Clinical Risk Management.

Specifically, they analyzed 51 spinal cord injury patients, aged an average of 43.4 years. The patients had acute spinal fractures from C2 to L3 or nonosseous lesions. The researchers examined the impact of 29 patients undergoing early stabilization and decompression (within the first four hours of injury), compared to 22 patients undergoing late stabilization and decompression (between four hours and 24 hours after injury). They used the American Spinal Injury Association Impairment Scale grades at admission time and six months post-injury. Botox Injections Bring Relief to Victims of Stroke, Spine, Brain Injury. Functional Outcomes per Level of Spinal Cord Injury: Overview, Neurologic Level and Completeness of Injury, C1-C4 Tetraplegia (High Tetraplegia) Lower extremity neuroprostheses can be used to provide mobility in individuals with low cervical or thoracic spinal cord injury (SCI). These devices can give a patient capabilities, such as standing, performing transfers, and walking, that were previously unobtainable with injuries at these levels.

The Parastep device one of the commercially available, portable FES system in which surface electrodes are placed over the quadriceps, peroneal nerve, and gluteal muscles to stimulate movement and allow the person to stand and walk. Use of this device is usually indicated for individuals with a T4-T12 neurologic level of injury. Factors limiting its use may include upper extremity strength, lower extremity joint ROM, pain sensation in the lower extremity, ability to tolerate high energy requirements, cardiac disease, clinically significant spasticity, lower motor neuron (LMN) injury of the lower extremity muscles, and severity of osteoporosis. Deciding when to Accommodate or Correct Abnormal Posture. As therapists, it is our nature to think we can fix everything.

We feel our goal should be to restore our patients back to “normal.” With the geriatric population, however, “normal” is very different than when they were 20, 30, or 40 years old.