EdTech Demonstrator Programme - Event Archive. We’ve had our first positive test but it won’t be our last – Framheadteacher. At 10.54am on Saturday morning I received an email from a parent informing me that her child had tested positive for Covid-19. 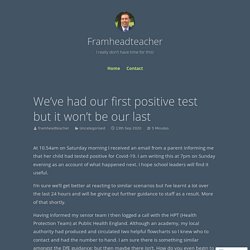 I am writing this at 7pm on Sunday evening as an account of what happened next. I hope school leaders will find it useful. I’m sure we’ll get better at reacting to similar scenarios but I’ve learnt a lot over the last 24 hours and will be giving out further guidance to staff as a result. More of that shortly. Having informed my senior team I then logged a call with the HPT (Health Protection Team) at Public Health England.

I received a call back a couple of hours later and found the advice very helpful. It slowly became clear that this is not an exact science. Perhaps it is because my advice at the start of term hadn’t been clear enough but most likely it is because this is new to all of us, but I received lots of questions from teachers. COVID-19 Learning Loss: What We Know and How to Move Forward - Rick Hess Straight Up. This week Dylan Wiliam, eclectic Wales native and emeritus professor at University College London, takes over the blog. 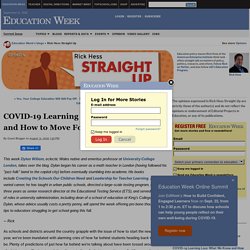 Dylan began his career as a math teacher in London (having followed his "jazz-folk" band to the capital city) before eventually stumbling into academe. His books include Creating the Schools Our Children Need and Leadership for Teacher Learning. Across a varied career, he has taught in urban public schools, directed a large-scale testing program, spent three years as senior research director at the Educational Testing Service (ETS), and served a number of roles in university administration, including dean of a school of education at King's College London. Dylan, whose advice usually costs a pretty penny, will spend the week offering pro bono thoughts and tips to educators struggling to get school going this fall.

Coronavirus: Your full guide to reopening schools in September. Schools will face what could be their most difficult term ever when they reopen to all pupils in September. 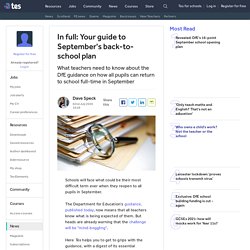 The Department for Education's guidance, published today, now means that all teachers know what is being expected of them. But heads are already warning that the challenge will be "mind-boggling". Here Tes helps you to get to grips with the guidance, with a digest of its essential elements. The guidance is intended to support schools for a return in September, and is split into five parts: Education nation – for the smartEST people in the world — Invest in Estonia. Estonian students are the best in Europe in mathematics, reading, science, and financial literacy according to the recent PISA tests. 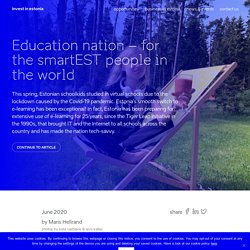 More than 60% of pupils said they are considering a future as entrepreneurs. This steady improvement in global education rankings has inspired Estonia to launch ‘Education Nation – for the smartEST people in the world’ to scale the experience and share it worldwide. The Estonian educational environment has been intertwined with digital and technological solutions for decades, just like the rest of the country. The Tiger Leap initiative in the early 1990s that brought IT and the internet to schools is considered part of the foundation for Estonia’s digital development.

The recent worldwide experiment with remote learning during the COVID-19 lockdown has made the advantages of this digital backbone clearer than ever. Education is a topic that touches most people in society and Estonians are eager to be part of the discussion, as well as chip in if needed. Heathfield Teach Share Blog. HNS Sports Day 2020.

Reopening school. How research is helping our children after the earthquakes - Christchurch Health Precinct. A University of Canterbury child health researcher is studying the impact of the earthquakes and their aftermath on some of Christchurch’s smallest and most vulnerable residents. 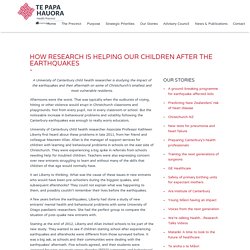 Afternoons were the worst. That was typically when the outbursts of crying, hitting or other violence would erupt in Christchurch classrooms and playgrounds. Not from every pupil, nor in every classroom or school. But the noticeable increase in behavioural problems and volatility following the Canterbury earthquakes was enough to really worry educators. University of Canterbury child health researcher Associate Professor Kathleen Liberty first heard about these problems in late 2011, from her friend and colleague Maureen Allan.

It set Liberty to thinking. A few years before the earthquakes, Liberty had done a study of new entrants’ mental health and behavioural problems with some University of Otago paediatric researchers. Liberty says the results were shocking. The comprehensive programme. A Recovery Curriculum – Evidence for Learning. “When will they actually go back to school?” 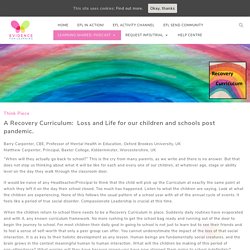 This is the cry from many parents, as we write and there is no answer. But that does not stop us thinking about what it will be like for each and every one of our children, at whatever age, stage or ability level on the day they walk through the classroom door. It would be naive of any Headteacher/Principal to think that the child will pick up the Curriculum at exactly the same point at which they left it on the day their school closed. Too much has happened. Listen to what the children are saying.