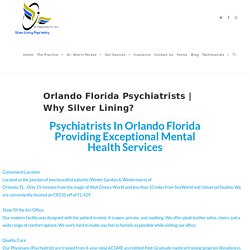 Only 15 minutes from the magic of Walt Disney World and less than 10 miles from SeaWorld and Universal Studios. We are conveniently located on CR535 off of FL-429 State Of the Art Office Our modern facility was designed with the patient in mind. Quality Care Our Physicians (Psychiatrist) are trained from 4-year-long ACGME accredited Post-Graduate medical training program (Residency). Digital Healthcare Our forms can be fully filled out digitally and sent to the office for an effective and efficient visits. Silver Lining Psychiatry - Accueil. What Can A Psychiatrist Do For You? Time To Prioritize Mental Health. “Health is wealth”. 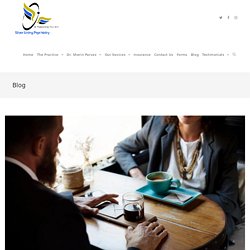 We have all heard of this at some point or another in our lifetime. Let me ask you one thing. What did you think about as soon as you read the word “health”? Almost all of us end up thinking only about physical well being in this case. Yes, we claim to give health and well-being the due importance that they deserve. ADHD (Attention deficit hyperactivity disorder) Attention-deficit/hyperactivity disorder (ADHD) can be described as a brain disorder affected by an ongoing pattern of inability to maintain attention. 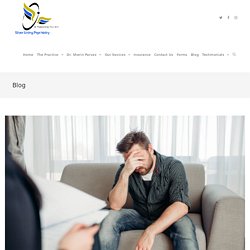 It also triggers hyperactivity or impulsiveness which would interfere with the functioning or development of the person. For the discussed disorder, the result could contribute in playing a role which causes individuals to face multiple challenges in his/her day-to-day activities and adheres to chemical differences as well as structural differences in the brain and genetics.

Can ADHD Be A Blessing? Should you consider your ADHD to be a blessing in disguise? 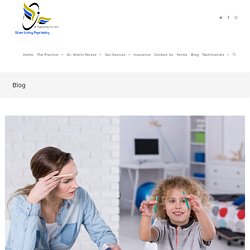 Finding It Hard To "Get Over It"? Are You Suffering From SAD? All of us fear up to varying extents about being judged every time we are around others. 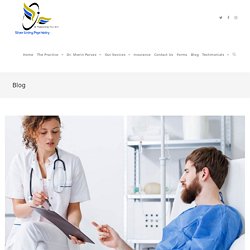 But for some, this social anxiety poses severe implications on their day-to-day life. Thus causing the person to withdraw from all social activities including work or school. SAD or Social Anxiety Disorder is a common mental health issue affecting a significant portion of the US population. This disorder can cause the person to appear shy, unfriendly or withdrawn. But in reality, that may not be the case. Many have the misconceived opinion that SAD is just an elevated form of shyness that doesn’t require help. Untreated Panic Attacks Can Lead To Panic Disorder. The chance of a panic attack or two progressing into a panic disorder is extremely high if left untreated. 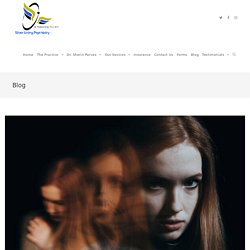 But this fear may seem irrational to others. Silver Lining Psychiatry- Psychiatrist Orlando Florida. Orlando's Top Psychiatrist. Psychiatric Services in Orlando Florida. Forms. Contact Us. Affordable Self Pay. ADHA (Attention Deficit Hyperactivity Disorder) Bulimia. Dieting and controlling what you eat is okay, but taking it too far could become a severe issue for your health and body. 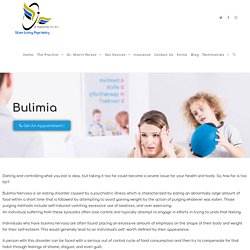 So, how far is too far? Bulimia Nervosa is an eating disorder caused by a psychiatric illness which is characterized by eating an abnormally large amount of food within a short time that is followed by attempting to avoid gaining weight by the action of purging whatever was eaten. Those purging methods include self-induced vomiting, excessive use of laxatives, and over exercising.An individual suffering from these episodes often lose control and typically attempt to engage in efforts in trying to undo that feeling.

Individuals who have bulimia nervosa are often found placing an excessive amount of emphasis on the shape of their body and weight for their self-esteem. Post Traumatic Stress Disorder(PTSD) Anxiety Treatment Orlando. Bipolar Disorder. Medication Management Orlando. Medication Management is an essential part of your treatment here at Silver Lining Psychiatry Orlando. 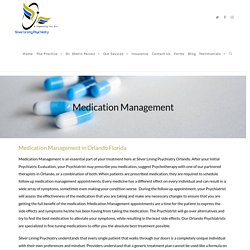 After your Initial Psychiatric Evaluation, your Psychiatrist may prescribe you medication, suggest Psychotherapy with one of our partnered therapists in Orlando, or a combination of both. When patients are prescribed medication, they are required to schedule follow up medication management appointments. Every medicine has a different effect on every individual and can result in a wide array of symptoms, sometimes even making your condition worse. During the follow up appointment, your Psychiatrist will assess the effectiveness of the medication that you are taking and make any necessary changes to ensure that you are getting the full benefit of the medication.

Medication Management appointments are a time for the patient to express the side effects and symptoms he/she has been having from taking the medication. Acute Stress Disorder (ASD) Depression. Initial Psychiatric Evaluations Orlando. Our Sevices. Benjamin Mann PA-C. Dr. Saleh Parvez. Dr. 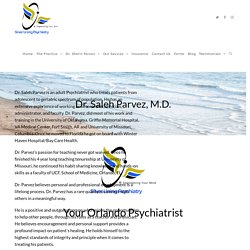 Saleh Parvez is an adult Psychiatrist who treats patients from adolescent to geriatric spectrum of population. He has an extensive experience of working as a researcher, clinician, administrator, and faculty. Dr. Parvez, did most of his work and training in the University of Oklahoma, Griffin Memorial Hospital, VA Medical Center, Fort Smith, AR and University of Missouri, Columbia.

Once he moved to Florida he got on board with Winter Haven Hospital/Bay Care Health. Dr. Sherin Parvez, MD. Dr. 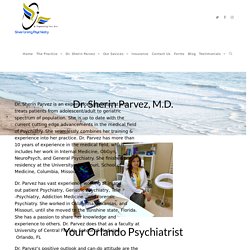 Sherin Parvez is an experienced psychiatrist who treats patients from adolescent/adult to geriatric spectrum of population. She is up to date with the current cutting edge advancements in the medical field of Psychiatry. She seamlessly combines her training & experience into her practice. Orlando Psychiatrist. Silver Lining Psychiatry.