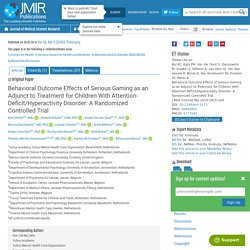 Compared to children without the disorder, children with ADHD have more difficulties at school making schedules to finish assignments on time, executing complex planning tasks, organizing material needed for assignments, remembering task instructions, and setting priorities [,]. Thus, it is not surprising that children with ADHD are more likely to show academic underachievement, poor academic performance, and educational problems compared to their counterparts without the diagnosis [].

Children with ADHD also show impairments in social functioning. They are rejected more often by their peers and have more conflicts with other children and adults compared to their counterparts who do not have ADHD []. Methods Participants Design ‎View this figure. Cochrane Community (beta) Connectionist Models of Word Reading pdf. Contributions of Letter-Speech Sound Learning and Visual Print Tuning to Reading Improvement: Evidence from Brain Potential and Dyslexia Training Studies. 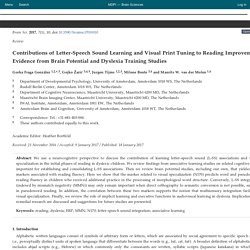 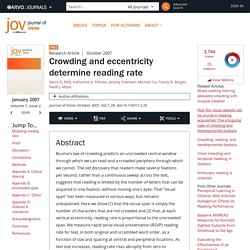 Free Research Article | October 2007 Crowding and eccentricity determine reading rate Denis G. Development of neural mechanisms for reading pdf. Dyslexics’ faster decay of implicit memory for sounds and words is manifested in their shorter neural adaptation. Essential revisions: The reviewers agree that this is a well designed and conducted study and that the behavioral and ERP data provide clear evidence during active discrimination, passive listening and reading for faster decay of implicit memory in dyslexics than in controls. 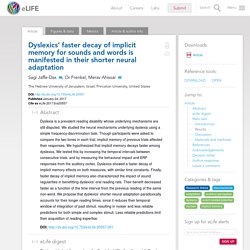 This is potentially an extremely interesting result. They have, however, raised several issues that will need to be addressed in a revised version of the manuscript. 1) The first major point that could be clarified concerns the assessment of the dynamics of P2 and N1 in relation to the behavioral curve. Based on a previous study, the authors assume that only P2 is directly associated with the contraction bias (i.e. the perceptual contraction of the pitch of the target toward the mean pitch of previous stimuli).

Re scales in figures – thanks: Figures 2C, 3C and 4C (previously notated as 2B, 3B and 4B respectively) are now shown with the same scale. Facts, values, and Attention-Deficit Hyperactivity Disorder (ADHD): an update on the controversies. From Asperger's Autistischen Psychopathen to DSM-5 Autism Spectrum Disorder and Beyond: A Subthreshold Autism Spectrum Model ~ Fulltext. Little interest has been hitherto devoted to adult courses of mild autistic forms, particularly those with normal or above the average intelligence, that usually remain undiagnosed or misdiagnosed upon the common assumption that autism is associated with intellectual and language disability as well as to severe impairment in social interactions. 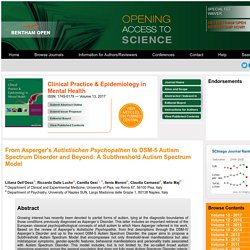 Autistische Psychopathie According to Hans Asperger. It Is Time to Rethink Central Auditory Processing Disorder Protocols for School-Aged Children. Disclosure:The author has declared that no competing interests existed at the time of publication. 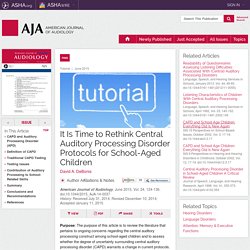 . × Linguistic Effects on the Neural Basis of Theory of Mind. ToM in Preverbal Infants If language is necessary for ToM, it follows that preverbal infants do not understand ToM. 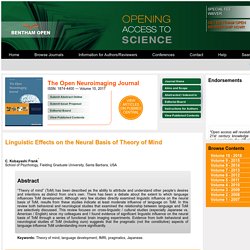 Several recent studies in infants showed that it is not the case. It has been shown that precursor ability (e.g., joint attention, imitation and pointing gestures) of ToM is present early in infancy (e.g., [27Meltzoff AN, Moore MK. Lip movements entrain the observers’ low-frequency brain oscillations to facilitate speech intelligibility. 1) The reviewers felt that the paper would benefit from a stronger theoretical underpinning. 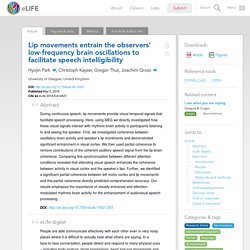 At present, it is structured as an investigation into brain oscillations, which makes it hard to keep track of what are the main questions and findings. Some reorganization of the paper would help here. We are grateful to the reviewers for the overall positive feedback to our manuscript. We have revised the logical foundation, organization and presented analyses within the revised manuscript according to the reviewer’s suggestions.

Importantly, we now provide a stronger theoretical underpinning by opening the Introduction with an introduction to the multisensory phenomena related to lip reading. 2) The claim made at several points in the manuscript that lip movements entrain activity in auditory cortical areas does not appear to be justified. We agree with the reviewers that we currently have no direct evidence that lip movements entrain auditory brain areas. Maturational changes in ear advantage for monaural word recognition in noise among listeners with central auditory processing disorders. Abstract This study aimed to investigate differences between ears in performance on a monaural word recognition in noise test among individuals across a broad range of ages assessed for (C)APD. 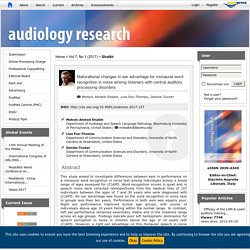 Word recognition scores in quiet and in speech noise were collected retrospectively from the medical files of 107 individuals between the ages of 7 and 30 years who were diagnosed with (C)APD. No ear advantage was found on the word recognition in noise task in groups less than ten years. Performance in both ears was equally poor. Right ear performance improved across age groups, with scores of individuals above age 10 years falling within the normal range. Models of visual word recognition. Modulation of the Genome and Epigenome of Individuals Susceptible to Autism by Environmental Risk Factors. 1. 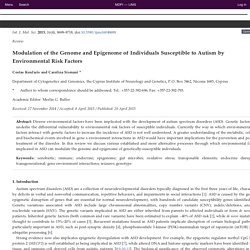 Introduction Autism spectrum disorders (ASD) are a collection of neurodevelopmental disorders typically diagnosed in the first three years of life, characterized by deficits in verbal and nonverbal communication, repetitive behaviors, and impairments in social interactions [1]. ASD is caused by the genetic or epigenetic disruption of genes that are essential for normal neurodevelopment, with hundreds of candidate susceptibility genes identified so far. Genetic variations associated with ASD include large chromosomal abnormalities, copy number variants (CNV), indels/deletions, and single nucleotide variants (SNV). The genetic variants implicated in ASD are either inherited from parents to affected individuals or form de novo in the patients.

Berger JI, Coomber B (2015) Tinnitus-related changes in the inferior colliculus. M-stream deficits and reading-related visual processes in developmental dyslexia. Multisensory Integration and Child Neurodevelopment. Although MSI capacity has been extensively studied in adults, little has been done to study it in young children. The first important question would be: Does this capacity exist at birth, or does it develop as a result of experience? One school of thought (early integration) argues for the innate nature of MSI while another (late integration) emphasizes the role of experience in the development of MSI. 2.1.1.

Treatment of reading impairment after stroke. What is the role of the medial olivocochlear system in speech-in-noise processing? Abstract The medial olivocochlear (MOC) bundle reduces the gain of the cochlear amplifier through reflexive activation by sound. Working memory, long-term memory, and medial temporal lobe function.