Oxford Academic. A developmental and genetic classification for midbrain-hindbrain malformations. Group I. 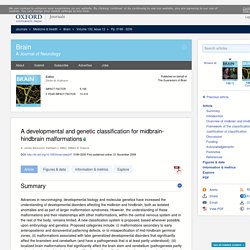 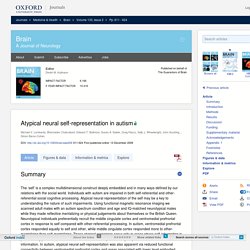 In the current study, we directly tested this hypothesis in 33 neurotypical male adults and 29 age and IQ-matched individuals with autism spectrum conditions. We observed specific disruptions in the neural systems involved in preferentially coding for self-information. The first of these effects was in the middle cingulate cortex. Rather than preferentially responding to self-mentalizing, the middle cingulate cortex in autism responds more to other-mentalizing. Auditory processing disorder in children with reading disabilities: effect of audiovisual training. Skip to Main Content Sign In Register Close Advanced Search Journals Career Network. 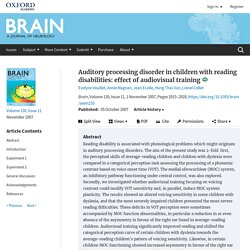 Clinical, genetic and imaging findings identify new causes for corpus callosum development syndromes. Of the 30–45% of cases with ACC with an identifiable genetic cause, 20–35% are caused by a mutation affecting a single gene (Bedeschi et al., 2006; Schell-Apacik et al., 2008). 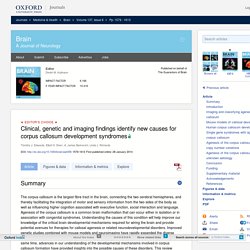 Although some Mendelian syndromes show complete or near complete ACC penetrance, the majority display ACC with incomplete penetrance (Table 3), which suggests that modifying genetic influences are often at play. Autosomal dominant, autosomal recessive, and X-linked causes of ACC have been described; however, no inheritance pattern is found in a significant proportion of cases and it is possible that many arise from de novo mutations. This is consistent with current data from the California Birth Defects Monitoring Programme showing that the risk of giving birth to a child with ACC is 3-fold higher for mothers aged 40 and above (Glass et al., 2008). 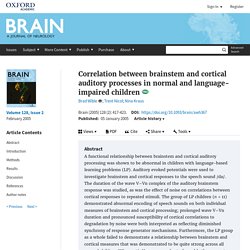 Describing the genetic architecture of epilepsy through heritability analysis. Deviant processing of letters and speech sounds as proximate cause of reading failure: a functional magnetic resonance imaging study of dyslexic children. Participants Eighteen children with a diagnosis of dyslexia [mean age: 9.39, standard deviation (SD): 0.43, one female] and 16 children without reading impairment (mean age: 9.43, SD: 0.44, four females) participated in the study. 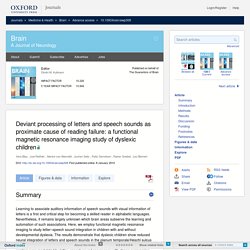 All subjects were healthy, right-handed, native Dutch speakers with normal or corrected-to-normal vision and normal audition. Dyslexic subjects were recruited via the Dutch Regional Institute for Dyslexia and diagnosed using an extensive, standardized cognitive-behavioural test procedure. Non-impaired readers were recruited via local schools. The groups were matched for educational level, age, handedness and IQ, (≥85, Wechsler Intelligence Scale estimated IQ within 1 SD of norm) and were tested on various measures for reading status using a standard test battery (Blomert and Vaessen, 2009). From sensation to cognition. Sensory information undergoes extensive associative elaboration and attentional modulation as it becomes incorporated into the texture of cognition. 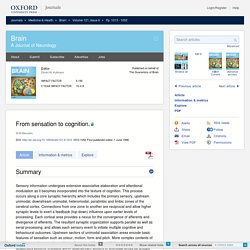 This process occurs along a core synaptic hierarchy which includes the primary sensory, upstream unimodal, downstream unimodal, heteromodal, paralimbic and limbic zones of the cerebral cortex. Connections from one zone to another are reciprocal and allow higher synaptic levels to exert a feedback (top-down) influence upon earlier levels of processing.

Each cortical area provides a nexus for the convergence of afferents and divergence of efferents. The resultant synaptic organization supports parallel as well as serial processing, and allows each sensory event to initiate multiple cognitive and behavioural outcomes. Gene-based association studies report genetic links for clinical subtypes of frontotemporal dementia. We use cookies to enhance your experience on our website. 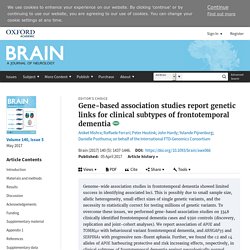 By clicking 'continue' or by continuing to use our website, you are agreeing to our use of cookies. You can change your cookie settings at any time. Skip to Main Content. Impaired tuning of a fast occipito-temporal response for print in dyslexic children learning to read. Language‐specific tuning of visual cortex? Functional properties of the Visual Word Form Area. In this study, normal subjects were presented with real words, consonant strings and chequerboards in their left or right visual hemifield. 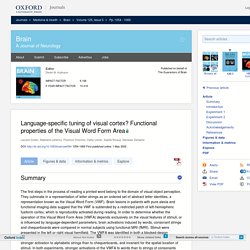 The first experiment followed a blocked‐design paradigm, while in the second experiment the six types of stimuli were randomly mixed, following an event‐related design. The analysis of activations concentrated on fusiform regions, and particularly on the putative VWFA. Localization of the VWFA The VWFA was identified easily in both experiments as a left‐hemispheric inferotemporal area displaying two key features.

First, it shows a stronger activation to alphabetic stimuli than to checkerboards. Neuroanatomical precursors of dyslexia identified from pre-reading through to age 11. This study is unique because it acquired data from before children began learning to read and followed them longitudinally until after dyslexia was diagnosed. 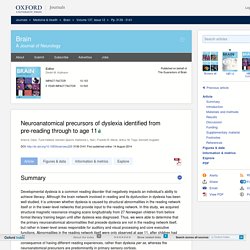 This is important because the neurobiological expression of dyslexia can be separated from the experience-driven changes related to reading development. Recent theories of dyslexia have focused on impaired phonological awareness as being causative (Ramus, 2003); however, impaired phonological awareness itself is a higher-level abstract function that some evidence suggests is an emergent property of reading or at least reciprocally related (Perfetti et al., 1987). Deficits in lower-level auditory processing have been suggested by Goswami (2003) as a potentially viable candidate for a low-level deficit that could lead to the frequently observed phonological awareness deficits.

Although, it has been noted elsewhere that lower level perceptual deficits alone are unlikely to explain everything in dyslexia (Ramus, 2003). Non-verbal sound processing in the primary progressive aphasias. Subjects. Paul Broca's historic cases: high resolution MR imaging of the brains of Leborgne and Lelong. Since Broca's time, the approximate region he identified has become known as Broca's area, and the deficit in language production as Broca's aphasia. Broca's area is now typically defined in terms of the pars opercularis and pars triangularis of the inferior frontal gyrus, represented in Brodmann's (1909) cytoarchitectonic map as areas 44 and 45 (Fig. 1).

The disorder is considered to be a complex of several symptoms that, together, contribute to the syndrome of Broca's aphasia (Goodglass, 1993; Benson and Ardila, 1996; Dronkers and Ogar, 2003). These symptoms can include problems with fluency, articulation, word-finding, repetition and producing and comprehending complex grammatical structures, both orally and in writing. Fig. 1. Phonological deficits in specific language impairment and developmental dyslexia: towards a multidimensional model. Skip to Main Content Sign In Register Advanced Search Journals Career Network.

Single-subject oscillatory gamma responses in tinnitus. Skip to Main Content. The left superior temporal gyrus is a shared substrate for auditory short-term memory and speech comprehension: evidence from 210 patients with stroke. Skip to Main Content. The neurological basis of developmental dyslexia An overview and working hypothesis. Beyond the neuroanatomical aspects reviewed in the previous section, active research is currently in progress from different perspectives in order to elucidate how the dyslexic brain functions or malfunctions.

It must be emphasized here that considerable caution is required when attempting to draw any explanatory model of dyslexia from the results reported below, since most of them only reflect statistical tendencies and never represent a systematic rule. As a consequence, all the theories proposed to date suffer from notable exceptions, where a given effect is sometimes only present in a minority of subjects, obviously limiting the impact of such observations. Moreover, finding a relationship between two measured variables does not mean that they are causally tied, so that any theory based on such observations must remain hypothetical, explaining, at best, only one part of the reality. Theories of developmental dyslexia: insights from a multiple case study of dyslexic adults. Psychometric tests.