Computer security, cybersecurity, or IT security is the protection of computer systems from theft or damage to their hardware, software or electronic data, as well as from disruption or misdirection of the services they provide.

What is an Eclipse Attack? Contents Introduction An eclipse attack is a relatively simple attack that a malicious actor may deploy to interfere with nodes on a network. 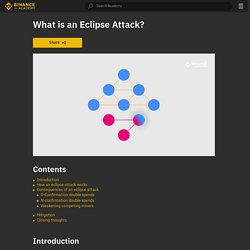 As the name may suggest, the attack aims to obscure a participant’s view of the peer-to-peer network, in order to cause general disruption, or to prepare for more sophisticated attacks. Eclipse attacks may sound similar, on the surface, to Sybil attacks. While they share certain similarities – the malicious actor will flood the network with fake peers – their end goal is ultimately different. The concept is discussed at length in the 2015 paper Eclipse Attacks on Bitcoin’s Peer-to-Peer Network, in which researchers from Boston University and Hebrew University report their findings from their experiments in mounting eclipse attacks, as well as possible countermeasures to combat them.

How an eclipse attack works A limiting factor for many nodes is bandwidth. Consequences of an eclipse attack 0-confirmation double spends N-confirmation double spends. Computer security. The protection of computer systems from theft or damage While most aspects of computer security involve digital measures such as electronic passwords and encryption, physical security measures such as metal locks are still used to prevent unauthorized tampering. 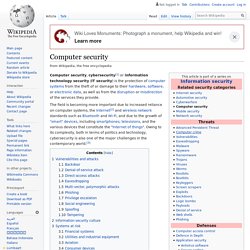 The field is becoming more important due to increased reliance on computer systems, the Internet[2] and wireless network standards such as Bluetooth and Wi-Fi, and due to the growth of "smart" devices, including smartphones, televisions, and the various devices that constitute the "Internet of things". Owing to its complexity, both in terms of politics and technology, cybersecurity is also one of the major challenges in the contemporary world.[3] Vulnerabilities and attacks[edit] Backdoor[edit] Sybil Attacks. A Sybil attack is a kind of security threat on an online system where one person tries to take over the network by creating multiple accounts, nodes or computers. 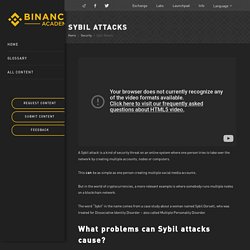 This can be as simple as one person creating multiple social media accounts. But in the world of cryptocurrencies, a more relevant example is where somebody runs multiple nodes on a blockchain network. The word “Sybil” in the name comes from a case study about a woman named Sybil Dorsett, who was treated for Dissociative Identity Disorder – also called Multiple Personality Disorder. Attackers may be able to out-vote the honest nodes on the network if they create enough fake identities (or Sybil identities). They can then refuse to receive or transmit blocks, effectively blocking other users from a network.In really large-scale Sybil attacks, where the attackers manage to control the majority of the network computing power or hash rate, they can carry out a 51% attack. So how do blockchains mitigate Sybil attacks? What is a Keylogger? What is a Keylogger? 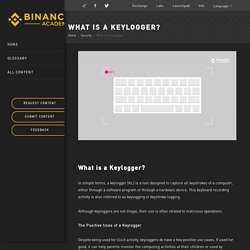 In simple terms, a keylogger (KL) is a tool designed to capture all keystrokes of a computer, either through a software program or through a hardware device. This keyboard recording activity is also referred to as keylogging or keystroke logging. Although keyloggers are not illegal, their use is often related to malicious operations. The Positive Uses of a Keylogger Despite being used for illicit activity, keyloggers do have a few positive use cases. The Negative Uses of a Keylogger As the name suggests, the purpose of a keylogger is to log each and every keystroke from the target computer, which is not necessarily a bad thing. Types of Keyloggers As mentioned earlier, there are two main types of keylogging devices. The Hardware Keylogger: What Is a DoS Attack? In short, a DoS attack - or Denial-of-Service attack - is a method used to disrupt legitimate users' access to a target network or web resource. 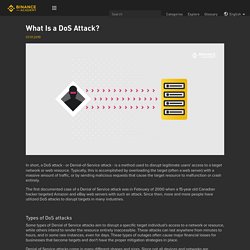 Typically, this is accomplished by overloading the target (often a web server) with a massive amount of traffic, or by sending malicious requests that cause the target resource to malfunction or crash entirely. The first documented case of a Denial of Service attack was in February of 2000 when a 15-year old Canadian hacker targeted Amazon and eBay web servers with such an attack. Since then, more and more people have utilized DoS attacks to disrupt targets in many industries. Types of DoS attacks Some types of Denial of Service attacks aim to disrupt a specific target individual's access to a network or resource, while others intend to render the resource entirely inaccessible.