Compliance refers to a response—specifically, a submission—made in reaction to a request. The request may be explicit (e.g., foot-in-the-door technique) or implicit (e.g., advertising). The target may or may not recognize that he or she is being urged to act in a particular way.

Compliance (psychology) Those with antisocial personality disorder tend to display a glibness and grandiose sense of self-worth. 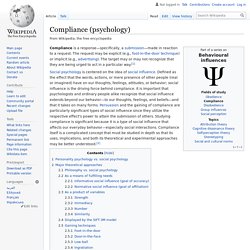 Due to their shallow affect and lack of remorse or empathy, they are well suited to con and/or manipulate others into complying with their wishes.Those with histrionic personality disorder need to be the center of attention; and in turn, draw people in so they may use (and eventually dispose of) their relationship.Those with narcissistic personality disorder have an inflated self-importance, hypersensitivity to criticism and a sense of entitlement that compels them to persuade others to comply with their requests. The study of compliance is often recognized for the overt demonstrations of dramatic experiments such as the Stanford prison experiment and the Stanley Milgram shock experiments.

These experiments served as displays of the psychological phenomena of compliance. People are motivated to achieve their goals in the most efficient and accurate manner possible. Behaviors. Nudge Theory. Dating. Persuasion. Manipulative People.

Precommitment. Propaganda. Foot-in-the-door technique. The principle involved is that a small agreement creates a bond between the requester and the requestee. 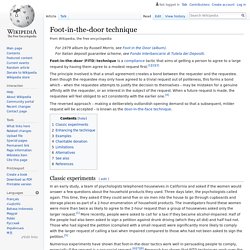 Even though the requestee may only have agreed to a trivial request out of politeness, this forms a bond which – when the requestee attempts to justify the decision to themselves – may be mistaken for a genuine affinity with the requester, or an interest in the subject of the request. When a future request is made, the requestee will feel obliged to act consistently with the earlier one.[4] The reversed approach – making a deliberately outlandish opening demand so that a subsequent, milder request will be accepted – is known as the door-in-the-face technique. 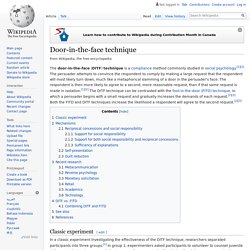 Combining DITF and FITD[edit] Study 1: Confederates asked one group of participants to read temperature and another to read air pressure. Study 2: This study was very similar to the first, except one group was given the second request immediately after the first, while another group was given the second request two to three days after the first. Study 3: This study used the same requests from the study 2. See also[edit] References[edit] ^ Jump up to: a b c d Cialdini, R.B.; Vincent, J.E.; Lewis, S.K.; Catalan, J.; Wheeler, D.; Darby, B. Low-ball. The low-ball is a persuasion and selling technique in which an item or service is offered at a lower price than is actually intended to be charged, after which the price is raised to increase profits. 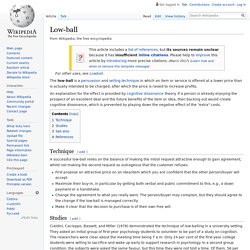 An explanation for the effect is provided by cognitive dissonance theory. If a person is already enjoying the prospect of an excellent deal and the future benefits of the item or idea, then backing out would create cognitive dissonance, which is prevented by playing down the negative effect of the "extra" costs. Technique[edit] A successful low-ball relies on the balance of making the initial request attractive enough to gain agreement, whilst not making the second request so outrageous that the customer refuses.

Ingratiation. Ingratiation is a psychological technique in which an individual attempts to influence another person by becoming more likeable to their target. 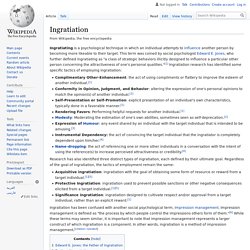 This term was coined by social psychologist Edward E. Jones, who further defined ingratiation as "a class of strategic behaviors illicitly designed to influence a particular other person concerning the attractiveness of one's personal qualities. "[1] Ingratiation research has identified some specific tactics of employing ingratiation: Research has also identified three distinct types of ingratiation, each defined by their ultimate goal. 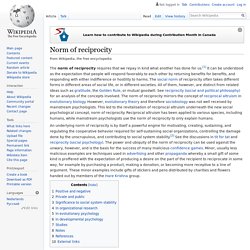 A positive norm of reciprocity is "the embedded obligations created by exchanges of benefits or favours among individuals. Intuitive Decision Making. Mentalism.