Why are there so many NGOs?

NGO mergers – Make sense, don’t they? 03/09/2011 at 11:26 am Earlier this week, the Irish Independent published a letter praising the high quality of the work of Irish NGOs responding to emergencies around the world, and stating that if those same agencies were to amalgamate they would save money and “have more clout and authority”. 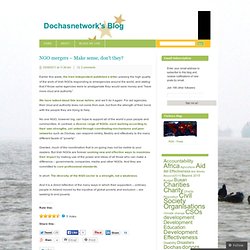 We have talked about this issue before, and we’ll do it again: For aid agencies, their clout and authority does not come from size, but from the strength of their bond with the people they are trying to help. No one NGO, however big, can hope to support all of the world’s poor people and communities. In contrast, a diverse range of NGOs, each working according to their own strengths, yet united through coordinating mechanisms and peer networks such as Dóchas, can respond nimbly, flexibly and effectively to the many different facets of “poverty”.

Granted, much of the coordination that is on-going may not be visible to your readers. Like this: Like Loading... Entry filed under: NGOs. Too many charities? - The Guardian. There are more than 185,000 registered charities in England and Wales. 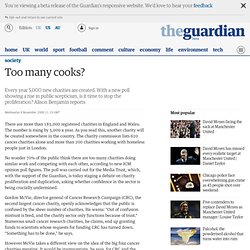 The number is rising by 5,000 a year. As you read this, another charity will be created somewhere in the country. The charity commission lists 620 cancer charities alone and more than 200 charities working with homeless people just in London. No wonder 70% of the public think there are too many charities doing similar work and competing with each other, according to new ICM opinion poll figures.

How to look at NGO mergers - Contributor: Advice for NGO executives. Fundraising is hard, and in a world where upstart social enterprises can raise millions overnight using social media, it can feel like a liability to be an old and venerable NGO. 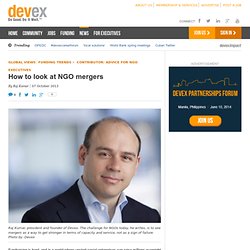 Of course there are always contracts and grants from traditional aid agencies, but between austerity measures (including government shutdowns) and increasingly global competition, that’s not easy either. So what’s an NGO executive to do? There was a one-word answer that I heard from several NGO executives at the Clinton Global Initiative some days back: “merger.”

NGO mergers and acquisitions: A growing trend? The merger between Save the Children and Merlin hogged the headlines late last month. 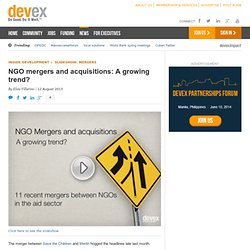 But to some, the news didn’t come as a surprise. Over the last few years, several nongovernmental organizations have joined up to broaden their operations — if not survive — in an increasingly competitive aid market. Time for the Nonprofit Sector to Consolidate. In the business world, it is not unusual for companies to be merged, bought and traded. 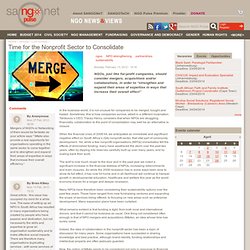 Sometimes, this is how companies survive, albeit in a different incarnation. Tshikululu’s CEO, Tracey Henry, considers that when NPOs are struggling financially, collaboration to the point of consolidation may well be an alternative to closure. When the financial crisis of 2008 hit, we anticipated an immediate and significant negative effect on South Africa’s (SA) nonprofit sector, that vital part of community development. Competition, Outsourcing, Mergers: NGOs Adapt To Economic Realities. AIX-EN-PROVENCE – It’s a beautiful spring day in southern France. 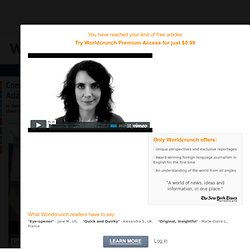 Students from the International Humanitarian Law & Action master’s program at University Paul Cézanne are divided into small groups of 15: It's time to role-play. Each group has received an envelope containing a scenario, and group three has to organize the return from Ghana of Ivorian refugees who fled civil war after the disputed 2010 presidential election. Are NGOs turning to M&A in globalized marketplace? - Merrill DataSite. The merger of the international health charity, Merlin, and fellow international non-governmental organization (NGO), Save the Children, in July has shed a light on how these international charitable organizations are re-examining their positions in a globalized yet also increasingly ‘going local’ marketplace. 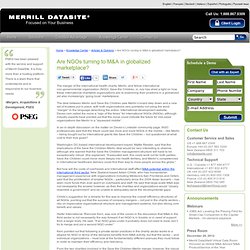 The deal between Merlin and Save the Children saw Merlin’s board step down and a new set of trustees put in place, with both organizations very pointedly not using the word “merger” in the language describing the action. International development website, Devex.com called the move a “sign of the times” for international NGOs (iNGOs), although industry experts have pointed out that the move could indicate the future for mid-sized organizations like Merlin in a “squeezed middle”. But how will the costs of overheads and international staff affect M&A potential within the international third sector. NGO cooperation & competition: survey. Lessons from Consortia. Why are there so many NGOs? 25/10/2010 at 10:27 am Put simply, NGOs are active groups of citizens, moved by the injustice of global poverty and exclusion, and driven “to do something” to end poverty. 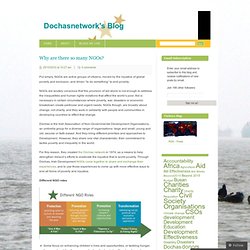 NGOs are acutely conscious that the provision of aid alone is not enough to address the inequalities and human rights violations that affect the world’s poor. Aid is necessary in certain circumstances where poverty, war, disasters or economic breakdown create particular and urgent needs. NGOs working together. NGOs explained. How to recognise an effective NGO. Managing an NGO. NGO Networks. Small is beautiful? NGOs & Charities. Charities’ real regulator is the general public - Social Affairs & News from Ireland & Abroad.