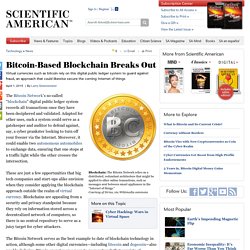 Adapted for other uses, such a system could serve as a gatekeeper and auditor to defend against, say, a cyber prankster looking to turn off your freezer via the Internet. Moreover, it could enable two autonomous automobiles to exchange data, ensuring that one stops at a traffic light while the other crosses the intersection. These are just a few opportunities that big tech companies and start-ups alike envision when they consider applying the blockchain approach outside the realm of virtual currency. Blockchains are appealing from a security and privacy standpoint because they rely on information stored across a decentralized network of computers, so there is no central repository to serve as a juicy target for cyber attackers.

S unexpected future direction - Ethereum Blog. Ethereum has been preparing what we consider to be the most exciting digital alliance since IBM and Microsoft partnered so successfully on the IBM PC. 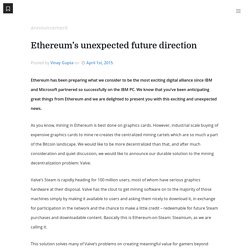 We know that you’ve been anticipating great things from Ethereum and we are delighted to present you with this exciting and unexpected news. As you know, mining in Ethereum is best done on graphics cards. However, industrial scale buying of expensive graphics cards to mine re-creates the centralized mining cartels which are so much a part of the Bitcoin landscape. We would like to be more decentralized than that, and after much consideration and quiet discussion, we would like to announce our durable solution to the mining decentralization problem: Valve. Valve’s Steam is rapidly heading for 100 million users, most of whom have serious graphics hardware at their disposal.

One more thing. Steamium will be integrated with and released along side of the eagerly-anticipated Half Life 3. Vinay Gupta. The Blockchain: A Supercomputer for Reality. CryptoquestionThe blockchain is a decentralized public ledger of all the Bitcoin transactions that have ever been executed. 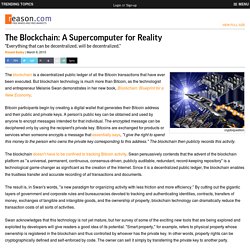 But blockchain technology is much more than Bitcoin, as the technologist and entrepreneur Melanie Swan demonstrates in her new book, Blockchain: Blueprint for a New Economy. Bitcoin participants begin by creating a digital wallet that generates their Bitcoin address and their public and private keys. A person's public key can be obtained and used by anyone to encrypt messages intended for that individual. The encrypted message can be deciphered only by using the recipient's private key. Bitcoins are exchanged for products or services when someone encrypts a message that essentially says, "I give the right to spend this money to the person who owns the private key corresponding to this address. " Email Encryption for Everyone - Hak5 1410.1. How To Make A Secret Phone Call. There's a lot you can find in the depths of the dark web, but in 2013, photographer and artist Curtis Wallen managed to buy the ingredients of a new identity. 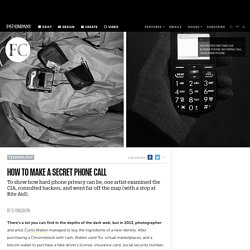 After purchasing a Chromebook with cash, Wallen used Tor, virtual marketplaces, and a bitcoin wallet to purchase a fake driver's license, insurance card, social security number, and cable bill, among other identifying documents. Wallen saw his new identity, Aaron Brown, as more than just art: Brown was a political statement on the techno-surveillance age. "I started looking into details on cell phone surveillance while I was working on Aaron Brown," Wallen said. "It opened my eyes to how insidious these little things really are. " With his latest project, "Proposition For An On Demand Clandestine Communication Network," (PropCom) Wallen doubles down on this anti-surveillance modus operandi. Darkleaks: The Decentralized Information Blackmarket Opens for Business. DarkleaksBlockchain technology is not just for cryptocurrencies. 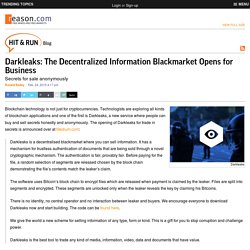 Technologists are exploring all kinds of blockchain applications and one of the first is Darkleaks, a new service where people can buy and sell secrets honestly and anonymously. The opening of Darkleaks for trade in secrets is announced over at Medium.com: Darkleaks is a decentralised blackmarket where you can sell information. It has a mechanism for trustless authentication of documents that are being sold through a novel cryptographic mechanism.

The authentication is fair, provably fair. What kind of merchandise? The site will obviously be useful to information freedom fighters, but will also attract less savory vendors.